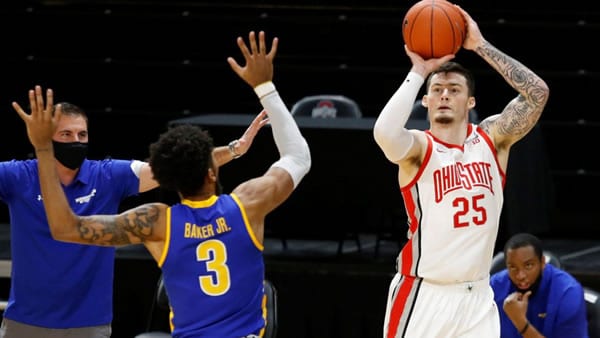 Two days ago, UCLA thought it was coming to Cleveland to play Kentucky, while Ohio State was getting ready to face North Carolina. But because of differences in COVID testing between the respective conferences, it was decided that the teams would switch opponents, with the Big Ten and Pac-12 schools matching up with each other. In terms of styles, that means that these teams are now playing an opponent that’s very similar to themselves. Both squads are solid offensive units that take their time before setting up a shot, which will likely lead to a lower-scoring contest. Shooting confidence could be key, and this game provides one key contrast there: UCLA comes in full of confidence after its fifth-straight win, while Ohio State comes off its first defeat of the season.

Keeping Jamie Jaquez on the court is essential, but to its credit, UCLA showed that it could survive without him on the floor, as Jaquez played just 28 minutes against Marquette thanks to foul trouble. With Jaquez limited, Jules Bernard really stepped up, and UCLA rode another strong defensive effort to a win. Since playing a three-overtime game with Pepperdine, UCLA has really increased its commitment to defense, as it’s held each of its past four opponents to 60 points or less. However, taking a look at the box score doesn’t tell the whole story about UCLA’s success. The reason the Bruins are doing so well for themselves is that they force their opponents to play at their pace and take their time before finding a shot. In a win over California, the Golden Bears actually didn’t shoot poorly at all, hitting 44 percent of their shots for the contest. But UCLA won by 20, in part because California only got 49 shots off for the entire game. Most college basketball teams get closer to 60 shots per game, and those extra ten shots make a world of difference. When a team is forced to play on UCLA’s terms, it finds out pretty quickly that UCLA’s terms are quite harsh.

E.J. Liddell is a rarity in 2020: a player who’s been on the shelf with an illness that isn’t COVID. Liddell’s got the old-fashioned illness of being stricken with mononucleosis, which has kept him on the shelf for both of the Buckeyes’ past two contests. Without him, Ohio State has seemed a tad lost on offense, scoring just 67 points against a Cleveland State squad that isn’t exactly known for its defense and managed to give up 101 points to Ohio. Getting Liddell back would be a big help on the boards, as Kyle Young is really Ohio State’s only other rebounding option. Duane Washington Jr. has carried the scoring load just fine with Liddell on the bench, but there’s no question that Ohio State needs to have a solid interior presence to beat power conference foes, and that’s especially true against a UCLA squad that doesn’t allow good shots as it is. If the Buckeyes lose the rebounding battle, which they did to both Purdue and Cleveland State, they probably lose the game along with it.

Time zones. Every expert is saying that playing at home is essentially meaningless this year, given that there are few to no fans in the stands, but a lack of fans doesn’t change the distance between Los Angeles and Cleveland. The Bruins won’t have to contend with a loud Ohio State crowd in northeastern Ohio, but they did have to get on a plane and cross three time zones, while the Buckeyes had a two-hour drive north on Interstate 71 from Columbus. The excess travel could lead to Ohio State catching UCLA asleep and getting off to a fast start, so if you like the Bruins in this matchup, you might want to wait until the first TV timeout to place your bet on UCLA. Conversely, if you like Ohio State, it would be wise to grab them now.

The Bruins can avoid falling into an early hole. UCLA’s defense is good enough to keep Ohio State at bay in the first few minutes while the Bruins are getting their sea legs under them, and Mick Cronin wants to see a low-scoring first few minutes in order to keep Ohio State from building its confidence. If the teams have less than 16 points combined at the first media timeout, the game will be right where the Bruins want it, as long as it isn’t 13-2 for Ohio State.

The Buckeyes can rediscover their shooting touch and be strategic with their fouls. UCLA is not a great free-throw shooting team, which can be an Achilles’ heel if a team can get close enough to them to make them sweat down the stretch. The way Ohio State keeps the game close is by hitting enough shots to hang around until the end.

The line has moved toward UCLA because bettors are gambling that Liddell isn’t going to play after he’s missed the past two games. He’ll be a game-time decision, and if he’s not on the court, UCLA has a significant advantage. Without Liddell, Ohio State just doesn’t have the personnel it needs to beat quality teams, even with the home-state advantage. I’ll be looking to lock the Bruins in as soon as they fall behind so I can get a better number. It’s a risk because they might not fall behind at all, but I think they’ll take five minutes to get adjusted before they get going. I’ll take UCLA.