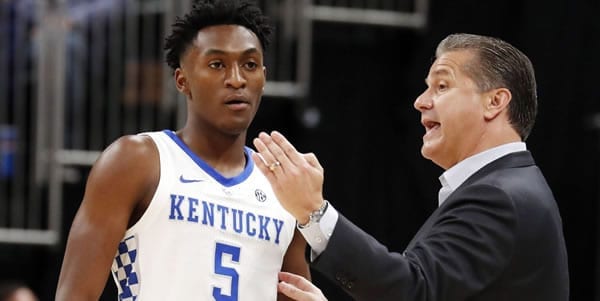 Say this for Utah Valley: it knows how to finish a game. The Wolverines fought UAB to a draw for 32 minutes and then closed the game out on a 21-10 run to finish off their hosts and collect a big road win. More impressive is that they did it despite an almost total lack of depth. Utah Valley used just eight players all night against UAB, and three of them played 15 minutes or less. None of those three scored a point, making this a team that is very dependent on its top five players. T.J. Washington led the charge on the offensive end with the scoring touch, but there’s a serious issue that UAB exposed: his inability to handle the basketball.

Washington turned the ball over nine times against UAB, and that’s a recipe for disaster against a quick Kentucky team that will be looking for easy baskets and highlight-reel dunks. He’s going to have to cut back on mistakes to keep UVU in this contest.

Youth issues regularly rear their head for Kentucky in November, and this was one of those times as the Wildcats managed to lose at home to Evansville to lose the No. 1 ranking. To be fair, Ashton Hagans was nowhere near himself, and EJ Montgomery didn’t play. However, Calipari still wasn’t particularly pleased with his team’s effort, as it seemed that Kentucky let itself get outfought by the Purple Aces. That probably won’t happen again this time, as Kentucky has been able to get back in the gym and work out its issues on the offensive side of the court.

To get back on track, Kentucky needs to start hitting its 3-pointers and get more help for freshman Tyrese Maxey. Maxey has played very well in three games at the collegiate level, but as a team, the Wildcats shoot less than 25 percent from beyond the arc. That’s not going to get it done against SEC opponents, and as Kentucky learned the hard way, it’s not even enough to beat a standard team from the Missouri Valley. The Wildcats have to take better shots and go after the ball when a steal is a possibility. Put simply, this squad has to defend and shoot to get the job done.

Evansville. Just how pissed off was Calipari after that loss? We’re going to find out, and we’re also going to find out just what kind of team the Wildcats really are. Kentucky met its first real taste of adversity with the loss to the Purple Aces, and this is the Wildcats’ chance to show just how much growth they’ve had after their first setback of the season. Does Kentucky come out looking to make a statement, or does this team not have the right mental makeup to be a truly great squad?

Utah Valley will Cover if:

Washington can control the ball, and the Wolverines get some extra help from their other scorers. Brandon Averette and Cason Jardine combined with Washington to take 41 of the Wolverines’ 52 attempts from the floor against UAB, and the Wolverines have to find some other options to help out their big three weapons. If Utah Valley can’t get someone else going, it’s hard to see it hanging around.

I really wouldn’t want to have been in the locker room in Lexington after that loss to Evansville. Then you throw in that Kentucky hasn’t played a game in the six days since that loss, and the Wildcats are likely to enter this game ready to break down the door to the locker room. Contrast that with Utah Valley, which won its last match on Friday at UAB. The Wolverines did a nice job in adjusting to the time change and the travel of going from Orem to Birmingham, but UAB is nowhere near the level of Kentucky. This was the game that was an opportunity for Utah Valley, and they took full advantage of it by getting the win.

This one is that dreaded second leg of a two-game swing for a smaller school, and they’re facing an opponent that’s ticked off and looking for someone to take it out on. I don’t expect this one to be close after the 10-minute mark of the first half. Give me the Wildcats in a rout.