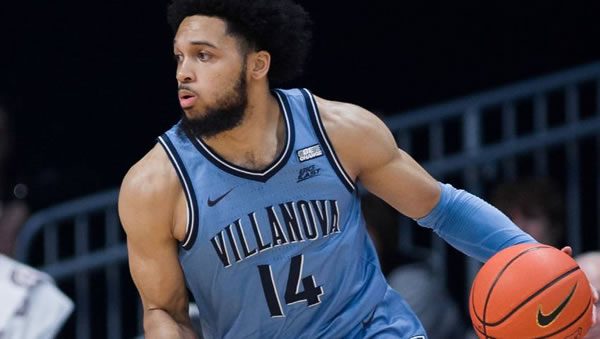 Villanova is just 7-7 on the season but has fared well playing lower-level opponents like today’s Georgetown. The Hoyas, though, have been a cashing machine in this matchup, losing three of four but covering the spread in all four. Can the ‘Nova win and extend the margin this time around? Tip-off at the Capital One Arena is set for 6:30 PM ET.

This game opened with Villanova a -8.5 favorite and has risen to -9.5 at most shops, driven by both sharp and public action. The total hit some CBB boards at as low as 142.5 points, but the consensus now is 143.5.

Going into their last game, Villanova was the betting favorite at -3 but fell to Marquette by a score of 68-66. The combined 134 points did not surpass the 144.5 total line.

Georgetown lost to Butler in their last game by a score of 80-51. But because the Hoyas were +4 point underdogs, they finished with an ATS win. The combined 131 points did not surpass the 143.5 total line.

Villanova
Over their last five games, Villanova has a straight-up record of 3-2 while going 3-2 vs. the spread. Over this stretch, the Wildcats’ offense is averaging 71.6 points per game while hitting 43.7% of their shots from the field. On the defensive end of the floor, they have allowed opponents to shoot 39.7% from the field while allowing 65.0 points per contest.

Georgetown
In their previous five contests, Georgetown is 0-5 straight-up and 1-4 vs. the spread. In these five games, they have a scoring average of 70.6 points per game on a shooting percentage of 42.4%. Defensively, they are allowing teams to hit 50.9% of their shots while giving up 86.4 points per game.

This season, the combined power rating of Villanova’s opponents comes in at 77.8. On the other side, Georgetown’s combined opponent power rating is 76.3.

How Does Villanova Fare On The Road?

For the season, the Wildcats have played six road games and have a record of 2-4. In these contests, Villanova is 3-3 vs. the spread. Offensively, they have averaged 69.3 points per game on a shooting percentage of 43.8%. On defense, the Wildcats allow 68.2 points per contest when playing away from home. So far, opposing teams have a field goal percentage of 41.6% in these games.

How Does Georgetown Fare At Home?

For the season, Villanova is averaging 72.6 points per game (158th) while posting an overall field goal percentage of 43.7%. In today’s game, they will be matched up against a Georgetown defense that has allowed an average of 77.7 points per contest. This year, opponents have hit 45.3% of their shots vs. Georgetown. On the other side, the Georgetown Hoyas are coming into the game averaging 70.7 points per game on a shooting percentage of 40.0%. The Hoyas will be facing a defensive unit allowing an average of 67.6 points per contest. So far, teams have hit 43.6% of their shots vs. the Wildcats.

From beyond the arc, Villanova has a shooting percentage of 35.9% while ranking 161st in attempts per game. The Wildcats will be facing a Georgetown defense that has a 3-point field goal shooting percentage allowed of 36.8%. Georgetown enters the game, having hit 34.2% of their looks from deep while averaging 7.65 made 3’s per game. On the other end, Villanova has allowed opponents to hit 34.9% of their shots from beyond the arc.

I don’t see Georgetown fixing their defense tonight against Villanova, but I do see them holding them to around 71 points. A number that ‘Nova has failed to surpass in five of their last seven games. On the other side of the equation, the Wildcats have played extremely well on the defensive side of the ball, holding four of their last five opponents to a FG % below 40% and 68 points or below in six of their last. Take the UNDER 143.5