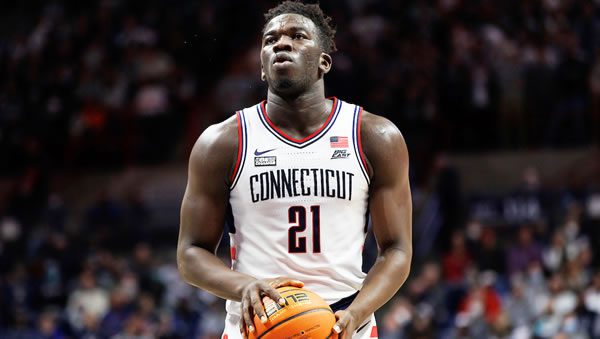 Villanova heads to Connecticut to take on the unbeaten Huskies on Wednesday night at the XL
Center.

This game opened with UConn as a -12 home favorite with a total line of 137.5 points. The
spread line has held at most betting shops, but the total has since a small dip to 137.

Villanova picked up a victory over St. John’s by a score of 78-63. Heading into the game, the
Wildcats were favored to win, with a point spread of -5. The combined 141 points did not surpass
the 146.5 total line.

Connecticut is coming off an 84-73 win over Georgetown. However, they did not cover the spread
in the game as -22 point favorites. The combined 157 points finished above the 149 total
line.

Villanova
Over their last five games, Villanova has a straight-up record of 5-0 while going 3-2 vs. the
spread. Over this stretch, the Wildcats’ offense averages 73.2 points per game while hitting
46.4% of their shots from the field. On the defensive end of the floor, they have allowed
opponents to shoot 40.5% from the field while allowing 61.6 points per contest.

Connecticut
In their previous five contests, Connecticut is 5-0 straight-up and 4-1 vs. the spread. In these
five games, they have a scoring average of 83.0 points per game on a shooting percentage of
48.1%. Defensively, they are allowing teams to hit 37.4% of their shots while giving up 59.6
points per game.

This season, the combined power rating of Villanova’s opponents comes in at 77.7. On the other
side, Connecticut’s combined opponent power rating sits at 75.8.

How Does Villanova Fare On The Road?

For the season, the Wildcats have played five road games and have a record of 2-3. In these
contests, Villanova is 2-3 vs. the spread. Offensively, they have averaged 70.0 points per game
on a shooting percentage of 43.9%. On defense, the Wildcats allow 67.0 points per contest when
playing away from home. So far, opposing teams have a field goal percentage of 41.9% in these
games.

How Does Connecticut Fare At Home?

In their nine games at home, Connecticut has a 7-2 record vs. the spread while going 9-0
straight-up. On offense, the Huskies are shooting 49.9% on their home floor, leading to 86.6
points per game. Defensively, opponents are shooting 38.9% in these contests. The Connecticut
defense is allowing 59.6 points per game at home.

For the season, Villanova is averaging 72.6 points per game (158th) while posting an overall
field goal percentage of 43.7%. In today’s game, they will be matched up against a Connecticut
defense that has allowed an average of 58.6 points per contest. This year, opponents have hit
38.0% of their shots vs. Connecticut. On the other side, the Connecticut Huskies are coming into
the game averaging 75.2 points per game on a shooting percentage of 43.6%. The Huskies will be
facing a defensive unit allowing an average of 67.1 points per contest. So far, teams have hit
43.6% of their shots vs. the Wildcats.

From beyond the arc, Villanova has a shooting percentage of 35.9% while ranking 161st in
attempts per game. The Wildcats will be facing a Connecticut defense that has a 3-point field
goal shooting percentage allowed of 26.6%. Connecticut enters the game having hit 35.4% of their
looks from deep while averaging 7.44 made 3’s per game. On the other end, Villanova has allowed
opponents to hit 35.0% of their shots from beyond the arc.

UConn has averaged 83.6 points per game overall and 88.5 at home but has scored over 75 points in just two of their last six games. They do play solid defense
allowing just 58.6 points per game on 38.1 FG shooting. Neither team plays especially fast,
making the Under 137.5 my bet for tonight’s game. Kick 2023 off right with free bowl game and Week 17 NFL bets! Deposit $100 to $300 and use promo code PREDICT100 and you’ll receive a massive 100% real cash bonus at MyBookie Sportsbook!