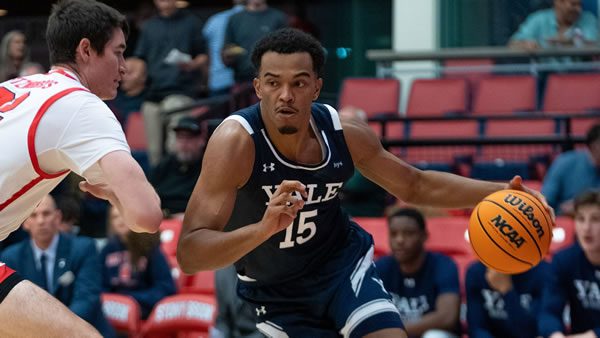 The Columbia Lions will have their work cut out for them when they host the Yale Bulldogs on Saturday. Tip-off for the match at Levien Gymnasium is set for 12:00 PM.

Yale picked up a victory over Monmouth by a score of 76-44. Heading into the game, the Bulldogs were favored to win, with a point spread of -13. The combined 120 points did not surpass the 133.5 total line.

Columbia lost to Maryland Eastern Shore in their last game by a score of 74-67. But because the Lions were +1 point underdogs, they finished with an ATS win. The combined 141 points finished above the 137 total line.

Yale
Over their last five games, Yale has a straight-up record of 3-2 while going 3-2 vs. the spread. Over this stretch, the Bulldogs’ offense is averaging 70.0 points per game while hitting 45.3% of their shots from the field. On the defensive end of the floor, they have allowed opponents to shoot 43.1% from the field while allowing 64.0 points per contest.

Columbia
In their previous five contests, Columbia is 2-3 straight-up and 2-2 vs. the spread. In these five games, they have a scoring average of 73.8 points per game on a shooting percentage of 41.0%. Defensively, they are allowing teams to hit 40.2% of their shots while giving up 66.6 points per game.

This season, the combined power rating of Yale’s opponents comes in at 69.3. On the other side, Columbia’s combined opponent power rating sits at 64.5.

How Does Yale Fare On The Road?

For the season, the Bulldogs have played nine road games and have a record of 6-3. In these contests, Yale is 7-2 vs. the spread. Offensively, they have averaged 69.8 points per game on a shooting percentage of 45.0%. On defense, the Bulldogs are allowing 61.7 points per contest when playing away from home. So far, opposing teams have a field goal percentage of 40.7% in these games.

In their eight games at home, Columbia has a 3-3 record vs. the spread while going 4-4 straight-up. On offense, the Lions are shooting 42.2% on their home floor, leading to 74.5 points per game. Defensively, opponents are shooting 40.0% in these contests. The Columbia defense is allowing 67.2 points per game at home.

For the season, Yale is averaging 72.3 points per game (166th) while posting an overall field goal percentage of 44.5%. In today’s game, they will be matched up against a Columbia defense that has allowed an average of 70.0 points per contest. This year, opponents have hit 42.1% of their shots vs. Columbia. On the other side, the Columbia Lions are coming into the game averaging 67.4 points per game on a shooting percentage of 42.5%. The Lions will be facing a defensive unit allowing an average of 56.5 points per contest. So far, teams have hit 35.6% of their shots vs. the Bulldogs.

From beyond the arc, Yale has a shooting percentage of 33.0% while ranking 440th in attempts per game. The Bulldogs will be facing a Columbia defense that has a 3-point field goal shooting percentage allowed of 34.1%. Columbia enters the game, hitting 35.6% of their looks from deep while averaging 7.62 made 3’s per game. On the other end, Yale has allowed opponents to hit 26.2% of their shots from beyond the arc.

Yale has dominated this series, winning the past four meetings with three of the four victories in blowout fashion. The lone exception was an 11-point win as a 15-point favorite. In that game, they roared out to a 46-28 point first-half lead and coasted in the second. First-half domination was the norm in the last four games between these clubs. Yale has led at the midway point by 9,18,16, and 19 points. Take Yale -8.5 first half. Bet your NCAA basketball picks for FREE this week by scoring a 100% real cash bonus on your first deposit of $100 to $300 when you use bonus promo code PREDICT100 at MyBookie Sportsbook!