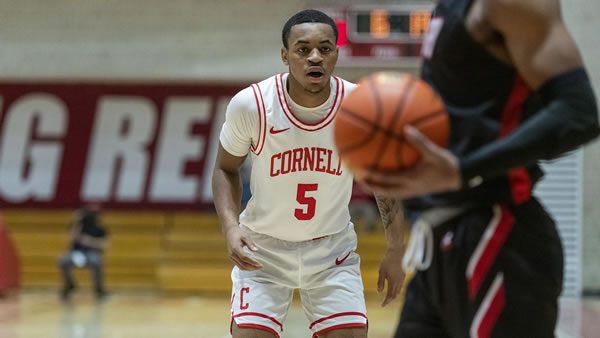 The Yale Bulldogs visit the Cornell Big Red on Friday night at the Newman Arena at Bartels Hall. Cornell is a small -1.5 favorite over visiting Yale, with a total line of 145. Tip-off for the game is scheduled for 5:00 PM ET and can be watched on ESPNU.

The spread line has not seen a lot of movement opening, with Cornell favored by -1.5 and hitting -2 before falling back to -1.5. The total has been on a slow climb hitting the CBB board as low as 144 at a few of the sportsbooks that we track before reaching as high as -145.5 at some of the sharper books.

Going into their last game, Cornell was the betting favorite at -3 but fell to Princeton by a score of 75-68. The combined 143 points did not surpass the 152 total line.

Yale
Over their last five games, Yale has a straight-up record of 3-2 while going 2-3 vs. the spread. Over this stretch, the Bulldogs’ offense averages 69.6 points per game while hitting 44.5% of their shots from the field. On the defensive end of the floor, they have allowed opponents to shoot 36.8% from the field while allowing 61.0 points per contest.

Cornell
In their previous five contests, Cornell is 4-1 straight up and 4-1 vs. the spread. In these five games, they have a scoring average of 81.4 points per game on a shooting percentage of 49.0%. Defensively, they allow teams to hit 50.1% of their shots while giving up 71.4 points per game.

This season, the combined power rating of Yale’s opponents comes in at 69.8. On the other side, Cornell’s combined opponent power rating sits at 70.4.

How Does Yale Fare On The Road?

For the season, the Bulldogs have played ten road games and have a record of 6-4. In these contests, Yale is 7-3 vs. the spread. Offensively, they have averaged 68.8 points per game on a shooting percentage of 44.4%. On defense, the Bulldogs allow 61.7 points per contest when playing away from home. So far, opposing teams have a field goal percentage of 40.0% in these games.

How Does Cornell Fare At Home?

In their eight games at home, Cornell has a 4-2 record vs. the spread while going 7-1 straight-up. On offense, the Big Red are shooting 49.2% on their home floor, leading to 85.9 points per game. Defensively, opponents are shooting 37.1% in these contests. The Cornell defense is allowing 66.8 points per game at home.

For the season, Yale is averaging 72.3 points per game (166th) while posting an overall field goal percentage of 44.5%. In today’s game, they will be matched up against a Cornell defense that has allowed an average of 71.8 points per contest. This year, opponents have hit 42.6% of their shots vs. Cornell. On the other side, the Cornell Big Red are coming into the game averaging 79.2 points per game on a shooting percentage of 46.7%. The Big Red will be facing a defensive unit allowing an average of 58.2 points per contest. So far, teams have hit 36.0% of their shots vs. the Bulldogs.

From beyond the arc, Yale has a shooting percentage of 33.0% while ranking 440th in attempts per game. The Bulldogs will be facing a Cornell defense that has a 3-point field goal shooting percentage allowed of 29.5%. Cornell enters the game having hit 34.8% of their looks from deep while averaging 9.65 made 3’s per game. On the other end, Yale has allowed opponents to hit 28.0% of their shots from beyond the arc.

Yale has done a bang-up job on defense to limit its opponents to 58.2 points on 37.7 FG% shooting. Their 3-point defense statistically has also been strong, allowing teams just 30.7%, but that has slipped to a middle-of-the-road 33.8 in conference play. Cornell lives by the three with 11.5 per game, and I believe they can get their share this afternoon. Big Red also has an opportunistic defense, ranking 3rd in the nation in steals per game, and can cause the Bulldogs fits. Take Cornell -1.5.