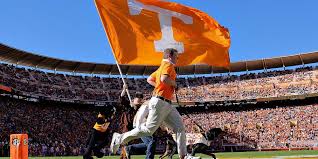 The Tennessee Volunteers delivered one of the biggest upsets in the SEC last week with an impressive 30-24 victory over no. 21 Auburn. The victory marked the Vols first SEC win since 2016 and poured gasoline on the fire that continues to surround Gus Malzahn’s tenure on the Plains. This Saturday the Vols will try to build off last week’s momentum as they get an opportunity to try to knock off the no. 1 team in the country when the Alabama Crimson Tide come into Neyland Stadium in Knoxville. Tennessee undeniably took a step in the right direction last week in Head Coach Jeremy Pruitt’s first signature victory but can they actually compete with this juggernaut of an Alabama team?

Every Alabama fan on the planet held their breath last week when starting quarterback and Heisman Trophy front-runner Tua Tagovailoa went down with an apparent knee injury. Tagovailoa aggravated a sprained knee that originally developed during the Arkansas game two weeks prior. Any time you see a knee injury even a sprain come up as the diagnosis, it is difficult to gauge the severity. Some sprains that are more severe can last several weeks. In the case for Tagovailoa, it does not appear to be too significant and he reportedly practiced in full on Monday. Therefore, Alabama will have their star (1760 passing yards, 21 touchdowns, 0 picks) back under center this Saturday to lead the nation’s number 1 ranked scoring offense.

Tennessee offense will struggle against Alabama

Despite Alabama’s offense being in full force once again this week and owning the best scoring numbers in the country, I think defense will be the story for the Crimson Tide this week. One of the main reasons I added another Alabama winning pick to my resume last week was because I believed the Alabama defense would get pressure on Missouri star quarterback Drew Lock who many believe to be the top quarterback in next year’s NFL Draft class. Despite Alabama’s own quarterback going down in the 2nd half, the Crimson Tide defense still dominated Missouri upfront and throughout the game allowing just 212 total yards to help cruise to a 39-10 victory while covering the spread. Drew Lock hit just 50% of his passes with 1 touchdown and 2 interceptions and often looked like a lost high school quarterback. Alabama forced turnovers and looked like the Alabama defenses that have terrorized SEC opponents throughout the Saban era.

This week I expect a similar trend against Tennessee. I know the Volunteers hung 30 points against Auburn last week but I am still not convinced in the least around the Vols offensive prowess. Last week, the Vols were handed numerous turnovers yet still only managed 68 rushing yards. Luckily, Tennessee quarterback Jarrett Guarantano threw for 328 yards with 2 touchdowns to help aid the upset. However remember my comments just above on how Alabama just made one of the best quarterbacks in the country look rather pitiful. Without a concerning running threat, this plays into Alabama’s strength where they can just be aggressive with their pass rush and blitz packages. I expect another really solid outing by Alabama’s defense from this situational and talent advantage. Tennessee has struggled all year offensively and those struggles will be obvious once again on Saturday.

Reason to bet Alabama over Tennessee

The defensive match-up is ideal for the Crimson.

Tide this week. The Crimson Tide will line up against a unit that ranks 98th in total offense and has a habit of turning over the football. Meanwhile, Alabama’s offense will take aim at a defense that simply does not have the size nor speed to compete. Road games are difficult in the SEC but they are a lot easier when you can control the trenches and that is where the biggest advantage is for Alabama on offense. Furthermore, the Crimson Tide continues to be a strong bet as one of the most consistent winners ATS since the start of 2017. If you like trends, also consider the fact Alabama is 6-2 ATS in their last 8 games against Tennessee and 7-1 ATS in their last 8 games against Tennessee in Knoxville.