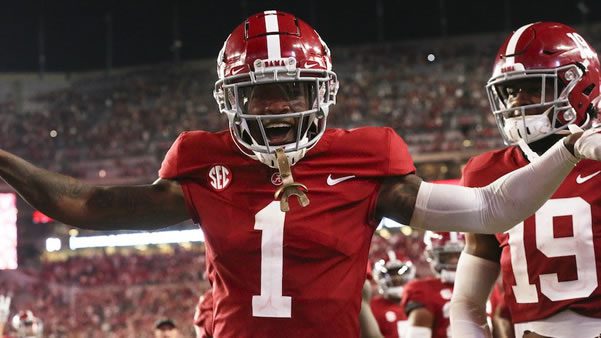 The top-ranked Alabama Crimson Tide makes the trip to College Station on Saturday to face the Texas A&M Aggies in a big SEC showdown. The unbeaten Crimson Tide are coming off their fifth straight win to start the season in a 42-21 win over Ole Miss, led by RB Brian Robinson, Jr. and his four TD runs. A&M wasn’t so fortunate, and after a 3-0 start to the season, they have now dropped two straight, including a 26-22 loss to Mississippi State on Saturday. A win here could help turn things around, while Alabama is looking to keep a good thing going. Who can notch the cover at College Station this week?

With Alabama averaging 45.6 points a game this season, it’s a fair question to ask if Texas A&M can even marginally hang in there from what we’ve seen this season so far. Against New Mexico and Kent, we saw glimpses of an offense that can fire up some points, but those defenses weren’t loaded with guys who will be playing on Sundays in the near future. Against Colorado and Arkansas, we saw a combined total of 20 points scoring from the Aggies. They got it going a little better against Mississippi State on Saturday, with the run-game coming alive a little bit.

Still, the A&M QB play with Zach Calzada has been lukewarm at best. Outside of Ainias Smith, there haven’t been any reliable weapons to target. Isaiah Spiller and Devon Archane combine for a nice 1-2 punch out of the backfield, but let’s just say the moments where this offense has looked elite has been scant thus far in 2021. If you’re of the thinking that a team that struggles to put up points against Colorado and Arkansas is in deep against Alabama, that’s not entirely unsound reasoning.

On top of the form we’re seeing from the Aggies, which alone is enough to repel some from picking them in this game, there hasn’t been anything peculiar about this matchup to suggest an advantage for A&M. They’ve lost their last eight meetings. Last season was a 52-24 beating, while the last time they were on Kyle Field, Alabama won, 47-28. The Tide usually put up a bunch of points, with the best A&M can do is stay vaguely competitive and maybe make a run at covering a big spread.

Can The Aggies Contain the Major Weapons?

The Crimson Tide, as usual, wield game-changing talent that can flip a game and any analysis on its head. We see WR Jameson Williams getting the better of secondary units with his speed while also standing out as a real threat to run one back on special teams. A couple of those splash plays in a given game make it hard for opponents to cover spreads. QB Bryce Young already has 17 TD throws with a handful of weapons that can levy serious damage. It’s balanced out by a run-game that can be dominant, with Robinson, Jr. looming as a major threat in this spot.

After showing decent pass-defense through three weeks in some advantageous spots, we saw the A&M defense give up 408 yards and 46 completions to Mississippi State QB Will Rogers on Saturday. The ease in which the Aggies allowed all kinds of different pass-plays to the Bulldogs’ pass-game doesn’t bode well against Bryce Young and his myriad of aerial artillery. Unless they found answers from some unknown source, this could be a long afternoon for the defense.

While it has registered at a lower context in spots, the Aggies have allowed a grand total of 63 points in five games this season. With this being a three-score spread, one could at least vaguely understand the optimism surrounding that kind of defensive resistance. Against one Pac-12 team and two SEC schools, that’s not a bad number. Michael Clemons and DeMarvin Leal have been really getting after quarterbacks, and with playmakers like Leon O’Neal, Jr. in the secondary, they’re capable of changing things with some big plays.

In a spirited home environment, one should expect an energetic A&M team at the very least. A team like this, where their realistic hopes aren’t all that high overall, a win like this can make their season. One could argue it means more to an Alabama team that has a lot of big things on the table, dreams that surpass those of Texas A&M. But for them, bigger things lie ahead. For A&M, Alabama is the big thing. Saban talks it up so that every opponent gets Alabama’s full respect, but if looking to identify times where you can expect to see the best Alabama this season, this wouldn’t be one of the top spots. Throw in an Aggies’ defense that can be stout and make big plays, and one can start to form an angle for a cover.

This is not a spot where you can overlook a team like A&M with all their talent on both sides of the ball, at home, and facing a big spot like this. It’s just that after a decent start to the season where the level of opposition was a big part of the equation, reality has come crashing down a bit on the Aggies and that only gets worse for Jimbo Fisher and Company this week. That number is a big one on the road, and scores like 48-31, 34-17, and 38-21 loom as possible problem-areas, but I think Alabama will score a conclusive win and cover the spread on Saturday. I’ll take the Tide.

Loot’s Pick to Cover the Point Spread: I’m betting on the Alabama Crimson Tide minus 17.5 points. Bet your Week 6 college football picks for FREE by taking advantage of a 100% REAL CASH bonus on your first deposit of $100 to $500 at GTBets!