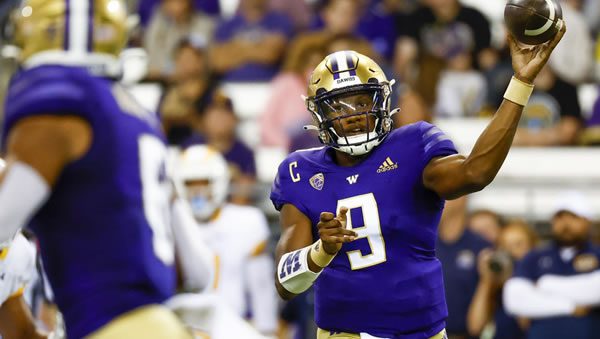 The Wildcats dropped their last game to Oregon by a score of 49-22. Arizona entered action as
13.5-point underdogs at home. The team finished the game by throwing for 1 touchdown pass.
Overall, the Wildcats had 241 passing yards on a completion percentage of 57.1%. On the ground,
the team ended with 1 rushing touchdown while averaging 4.6 yards per carry for a total of 115
yards.

So far, quarterback Jayden De Laura has a passer rating of 94.65 while completing 149 of his
241 attempts. Currently, he has a total of 1874 passing yards. Jacob Cowing leads the team’s
receiving corps with 46 catches for a total of 643 yards. The top option in the run game for the
team is Michael Wiley, who has carried the ball 57 times for a total of 297 yards.

The Huskies come into the game with an overall record of 4-2. But they are currently 1-2 in
Pac-12 action. This season, the Huskies have an ATS mark of 4-2-0 while being favored in every
game. Their over-under record sits at 5-1-0 on an average point total betting line of 59.25.

Washington is coming of a 7-point loss to Arizona State by a score of 45-38. The Huskies
entered the game as 13.5-point home underdogs, making this an ATS loss. To finish the game, the
Huskies had a yards per completion figure of 9.5 and a total of 324 yards through the air.
However, they did not come up with a touchdown pass through the air. The team ended the game with
5 rushing touchdowns, along with a total of 134 yards on the ground.

Heading into the matchup, Michael Penix Jr. has an overall passer rating of 105.98 on a total
of 2044 yards. Thus far, he has thrown for 16 touchdowns and 4 interceptions. Rome Odunze leads
the team’s receiving corps with 35 catches for a total of 524 yards. In the run game, Wayne
Taulapapa has accumulated 406 on 70 attempts to lead the team.

In their last 5 games away from home, the Wildcats have a straight up record of 1-4-0 while
going 2-3-0 vs the spread. The team averaged 27.2 points per game in this stretch.

When looking at their past 5 home matchups, Washington has an ATS record of 4-1-0 while
averaging 37.8 per game. The team went 4-1-0 overall in these games.

Heading into this week’s matchup, the Wildcats will look to improve their offensive output, as
they are ranked just 68th in the NCAA in points scored and face a Washington defense that is
allowing an average of 26.83 points per contest.

So far, the Arizona offense is averaging just 132.5 yards per game on the ground. This
production has come on an average of 30.33 rush attempts per game (119th). This week, the
Wildcats will be facing a Washington defense that is ranked 43rd in rush yards allowed per game.
So far, they are averaging 125.0 yards per game when facing top 25 rush defenses.

So far, the Huskies are averaging 41.0 points per game on offense, which is good for 12th most
in college football. This could be another big game for Washington, as Arizona is giving up 34.17
points per game and has its problems getting off the field on 3rd down.

So far, the Washington offense is averaging just 141.17 yards per game on the ground. This
production has come on an average of 33.33 rush attempts per game (96th). This week, the Huskies
have an excellent matchup against an Arizona rush defense that is ranked 175th in rush yards
allowed per game.

Washington -16. Did you know that you could be wagering on games at -105 odds instead of -110? Imagine how much money you’d be saving! Thousands! Make the switch to BetAnySports Sportsbook! You’ll be so glad you did!