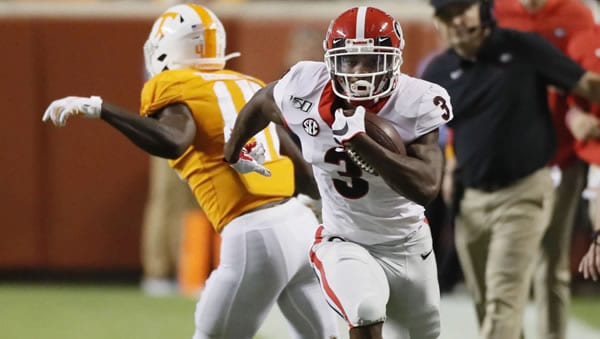 Two wins against Texas and Texas A&M means that Arkansas has the country’s attention, but getting the country’s respect is another matter entirely. The Razorbacks still haven’t proven that they’re for real in the eyes of most people, but a win over Georgia would completely change that narrative. The Razorbacks haven’t won a game in an SEC East stadium since knocking off Tennessee in Knoxville in 2015, and they’ve lost 10 of their past 11 against the supposed lesser division of the SEC, despite playing just two of those 11 games against the Eastern power axis of Georgia and Florida.

This year’s Razorback squad appears that it’s moved in the right direction, but challenging the likes of Georgia is another matter entirely. The Bulldogs have blitzed through four opponents and are coming off a 62-0 rout of Vanderbilt that was even worse than the final score indicated. The Bulldogs have given up just 23 points on the season, and seven of that came off an interception return by UAB against Georgia’s second-string offense. Georgia’s first-string defense has given up a grand total of six points in four games that weren’t set up by turnovers — field goals by both South Carolina

and Clemson are the only genuine drives put together against the Bulldogs.

How the Public is Betting the Arkansas/Georgia Game

The public is siding with the Razorbacks so far, with 71 percent of tickets coming in on Arkansas. That’s ticked the spread down a point, as the spread has fallen from -19.5 to -18.5. The public hasn’t bet the total enough to change the number, which has held firm at 48.5.

This is a case of strength on strength, as Arkansas has relied on running backs Trelon Smith and Raheim Sanders, along with a few runs by quarterback Jefferson, to punish opposing defenses. That could be a problem against a Georgia defense that has only allowed 66 rushing yards per game, but the Razorbacks might be better equipped than most teams to deal with the Bulldogs’ front seven because Arkansas coach Sam Pittman was previously the offensive line coach at Georgia and went up against the Bulldogs’ defense in practice on a daily basis before moving to Fayetteville.

When Arkansas does pass, Treylon Burks is likely to be on the receiving end, having caught 19 of the Razorbacks’ 49 completions on the season. Burks has been the big-play threat for Jefferson, as he’s responsible for 42 percent of Arkansas’ receiving yards. With the Bulldogs likely to go all out to try to stop him and the ground game, though, No. 2 man Tyson Morris might need to step up here.

Georgia hasn’t really had to prove that it can run the ball yet, as they’ve gone through South Carolina and Vanderbilt like a truck through a piece of aluminum foil and didn’t have to worry much about the offense because the defense had the game under lock and key against all-field, no-hit Clemson. When the Bulldogs have kept the ball on the ground, Zamir White and James Cook have responded well, as each currently averages 5.6 yards per carry.

The passing game somehow keeps churning along with J.T. Daniels in the game, despite Georgia running the risk of running out of bodies at the wide receiver position. Of the players listed on Georgia’s injury report, five-play wide receiver and another pass-catcher is nicked up in tight end Darnell Washington. Brock Bowers and Jermaine Burton have managed to stay healthy, and as long as Daniels is under center, the Dawgs have had no problem moving the ball through the air.

These teams don’t really play each other often enough to establish long-term trends, as they’ve only met four times in the past 15 years. Arkansas did win the most recent matchup in Athens, but that game was played in 2010 before any player in this game had even reached high school.

So the trends that matter are what these teams have done in recent years, and Arkansas has been one of the more reliable bets in the SEC, even as the Razorbacks struggled to get results on the field. Arkansas has covered in 10 of its last 13 SEC games and 13 of its last 16 games overall. The Razorbacks have also done this almost entirely as a dog, going 11-3 in their past 14 when giving points.

On the Georgia side of the ledger, the Bulldogs’ fantastic defense means that the oddsmakers almost always set the total far too low. Georgia has seen the over hit in five straight home games and six straight SEC games, mainly because if the Bulldogs’ offense has a good day or the defense makes one mistake, the total is usually so low that it’s enough to hit the number.

It’s expected to be a warm day in Georgia, with temperatures hitting 85 degrees at kickoff on a partly cloudy day. Winds won’t be much of a factor, as wind will only blow at four miles per hour.

Georgia has shown its power on defense, and while Arkansas has handled both Texas and Texas A&M, it hasn’t yet proven that it can win a struggle against a team as talented as the Bulldogs. Arkansas is likely to keep the game close for three quarters before succumbing, but Georgia is just too powerful.

Give me the Dawgs. Bet your Week 5 college football picks for FREE by taking advantage of a 100% REAL CASH bonus on your first deposit of $100 to $1000 at Betnow!