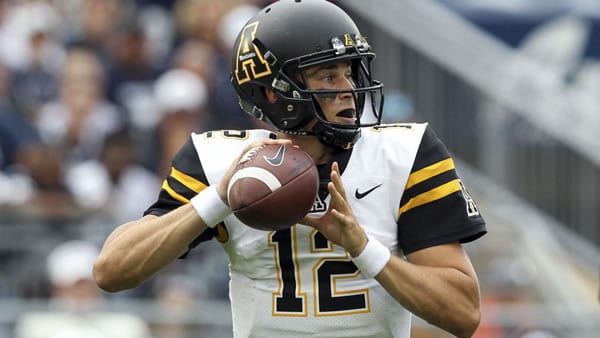 It’s been a long wait for Appalachian State, but the Mountaineers are finally back on the field after a long bout with COVID. The Mountaineers have spent all of October sitting and waiting since they played Campbell, while the Sun Belt race has gone on without them. They’ve had to postpone multiple games in the league, and they’re now well behind the rest of the league in terms of games played. However, they’re still the four-time Sun Belt champion, and they’re still considered the team to beat.

But one thing they haven’t done since they joined FBS is beat Arkansas State at home. Granted, they’ve only got one shot at the Red Wolves in Boone, given that the teams are in different divisions and do not play every year, but Arkansas State won that game in 2015 on its way to a Sun Belt championship. The Red Wolves would love to repeat that 2015 performance, but realistically, they’d be thrilled with an improvement on 2018’s performance. Two years ago in Jonesboro, the Red Wolves were thumped by the Mountaineers, losing a 35-9 decision to Appalachian State. Can they find a way to put their on-field experience to good use in this matchup?

How the Public is Betting the Arkansas State/Appalachian State Game

MORE FREE BETS: DEPOSIT $25, GET A FREE $50 BET AT ONE OF THE WEB’S OLDEST BOOKIES: INTERTOPS SPORTSBOOK! MUST USE BONUS CODE ROOKIE200

The two-quarterback system is alive and well for the Red Wolves with Layne Hatcher and Logan Bonner, and Georgia State certainly couldn’t come close to stopping it, as the Red Wolves’ two signal-callers threw 28 passes each and put up 59 points on their way to a win over the Panthers. Arkansas State can run the ball with Jamal Jones and Lincoln Pare, as both backs average more than four yards per carry, but the Red Wolves definitely prefer to pass.

Given that they’ve got a top pass catcher in Jonathan Adams, it’s hard to blame them. Adams is the main man for the Red Wolves, hauling in 41 balls for 539 yards and seven touchdowns, two of which came against the Panthers. However, Arkansas State is far more than just Adams, as Dahu Green and Brandon Bowling have combined for nine touchdowns between the two of them.

The problem is that Appalachian State has seen this before and doesn’t have any problem with the Red Wolves’ reluctance or outright refusal to run. The Red Wolves tried this two years ago in Jonesboro, and it went about as well as you might expect, as the Mountainers snuffed out the attack and held Arkansas State to a mere nine points. It’s unlikely they’ll be anywhere near that successful this time, but Coastal Carolina was able to tee off on the Red Wolves by pressuring both quarterbacks and taking them out of their game. If Arkansas State can’t stand up to the Appalachian State defense, this won’t end well.

The Mountaineers are willing to run, and when they do, they like to run it with Daetrich Harrington. The junior back already has 301 yards and six scores on the season, and when he gets rolling, App State is tough to stop. He didn’t get rolling in the loss to Marshall, however, and the Mountaineers were only able to muster a touchdown against the Thundering Herd.

The way that you beat the Mountaineers is by stopping them at the line of scrimmage, and that’s a significant issue for the Red Wolves, who have barely stood up to anybody on the ground in 2020. Arkansas State has put up some awful numbers this season in terms of run defense, as the Red Wolves give up 175 yards a game on the ground. In fact, Arkansas State hasn’t held any FBS opponents under 30 points this season, and if the Red Wolves can’t pick up their defensive play, that isn’t going to change in this game. The Mountaineers average just 201 yards a game through the air, so if the Red Wolves can force Zac Thomas to beat them, they’ll have a major advantage. But there’s little evidence to suggest that the Red Wolves will be able to get the Mountaineers out of their preferred offense, which could make it difficult for them to get their own offense on the field.

These teams tend to put up a lot of points against each other, and Appalachian State has undoubtedly done its fair share, scoring no fewer than 27 points against the Red Wolves in three meetings. Given that Arkansas State’s big weakness appears to match up very well with Appalachian State’s biggest strength, I’d expect the Mountaineers to more than do their share of the scoring. The current number has Appalachian State scoring roughly 38 points, and I think there’s an excellent chance that they do exactly that.

However, covering this number might be a little tough. Appalachian State tends to get too many points because of its sterling reputation, and the Mountaineers have really struggled to cover their number in recent games. Appalachian State has failed to cover in four straight games, and in their past five games at home, they’ve managed to cover just once. On the other hand, Arkansas State has had no trouble hitting its number as of late, as the Red Wolves have covered in five of their past six contests. The one exception was the Coastal Carolina game, and that one got an asterisk because the Red Wolves were coming off multiple weeks off because of COVID. When they’ve been able to get into their flow, Arkansas State’s been very difficult to beat.

This should be an excellent evening for football, with temperatures at 69 degrees and partly cloudy skies at kickoff.

An increasing line isn’t really where I want to be in this situation, as I’m a little skittish about Appalachian State’s ability to actually get the job done when they’re coming off so much time off. It takes time to get back on track after a lot of time away, and the Mountaineers have been doing nothing but watching while the Red Wolves have been playing games.

The way I would play this is to take Arkansas State on the spread in the first half, which I anticipate will be around 5.5 to 6.5 points by the time you read this. Both of the Mountaineers’ games against FBS competition were tight contests at the half, with Appalachian State leading by four against Charlotte and trailing by four at Marshall. I expect it’ll take the Mountaineers about a half to get their legs under them after so much time off, and that makes the Red Wolves excellent value here.

For the game itself, I think this line is a point or two too high, and I expect the Red Wolves to keep it close in a shootout. I’ll take Arkansas State and the points along with the over, as I expect Appalachian State to take too long to get back to game speed to cover double digits. Bankroll Builder: Deposit $500 to $1000 and get that same exact matching amount credited to your betting account as a 100% real cash bonus! This offer is going to disappear next week! Get it at Betnow Sportsbook!