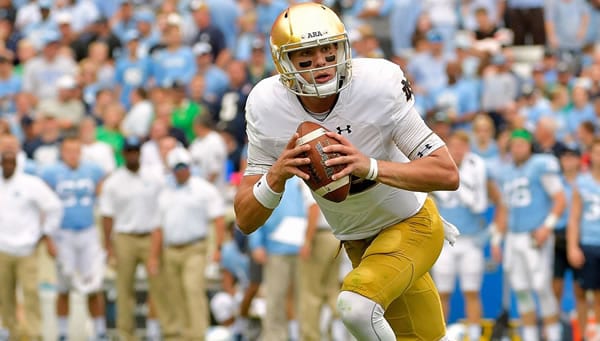 In a series that began play back in 1909, Notre Dame takes on Pittsburgh in a now ACC showdown on Saturday afternoon at Heinz Field. The Irish a 49-21-1 all-time advantage in the series and has had the upper hand of late, winning five of the last six meetings between the teams.

Pitt comes into the game with a 3-3 record but, unfortunately, riding a three-game losing streak. Two of their defeats were by just a point apiece (NC State and Boston College), and while the loss last week against Miami was by double-digits, they were also playing without their senior starting quarterback Kenny Pickett.

After injuring his ankle against BC, Pickett didn’t make the trip to Miami, and he is currently questionable to play this weekend against the Irish. If he is unable to play, the Panthers would again turn to redshirt freshman Joey Yellen, who started last weekend against the Hurricanes, throwing for 277 yards a touchdown with no interceptions and just completing 48% of his passes. The status of Pickett is a significant question mark for the week, as he brings not only an experienced leadership dynamic but also a dual-threat ability highlighted by the fact that he currently leads the Panthers in rushing touchdowns with five and is second in rushing yards with 119. This skill set is something the Irish have struggled against their last two games versus Seminoles’ quarterback Jordan Travis and last week Louisville’s Micale Cunningham.

Four wide receivers make up the focal point of the Pittsburgh passing game; Jordan Addison, DJ Turner, Shocky Jacques-Louis, and Taysir Mack. Addison is the clear top option, leading the team in receptions (38), yards (444), and touchdowns (3). DJ Turner is second in yards but has just two catches in his past two games, while Jacques-Louis and Mack will continue to look to put up a more consistent stat line from game to game. Vincent Davis is the only running back that appears to be a consistent threat out of the backfield, as he is the sole one at his position with more than four receptions with 16 on the season so far for a total of 106 yards.

While the Panther passing attack ranks 20th in the country, the running game is just 69th. Vincent Davis is the leader of the backfield but has averaged only 2.8 yards per carry to go along with his three touchdowns. A.J Davis and Israel Abanikanda are the second and third option, but neither of them is averaging at least four yards per carry either, and as a whole, quarterback Kenny Pickett has just one less rushing touchdown with five then the rest of the team combined.

The Pittsburgh team’s strength is undoubtedly their defense, which ranks nationally 1st against the run, 7th in total yards allowed per game, and 16th in scoring. They are led upfront by a defensive line of future NFL talent, highlighted by Patrick Jones and Jaylen Twyman while also including Rashad Weaver. The defensive backfield is led by junior Paris Ford, who is expected to be one of the first safeties off the board if he declares for the draft as expected after this season. Currently, he is tied for the NCAA lead in interceptions with three.

The powerful Panther front line will face their toughest of the season when they take on a Notre Dame rushing attack that ranks 7th in the country with an average of 261 yards per game. Sophomore Kyren Williams is now cemented as the clear lead back and on the season has rushed for 486 yards and four touchdowns with a 6.7 yards per carry average. He is also a definite factor through the air as well, ranking second on the Irish in receiving yards with 119 on seven receptions. Chris Tyree is an effective backup behind Williams, with C’Bo Flemister another as well, though the latter has been limited to just two games so far this season. Louisville running back Javian Hawkins was able to find some success against the Panthers, but in their other five games, Pittsburgh has been especially dominant in slowing down the opposing teams rushing attack, limiting Miami, NC State, Boston College, Syracuse, and Austin Peay to only one touchdown on the ground and a combined 283 yards on 176 carries, which averages out to just 1.6 yards per.

With the Irish running game facing the stout test upfront, they will need to see better play out of quarterback Ian Book if they want to continue their undefeated streak. The senior signal-caller had just 106 yards passing on 11 of 19 passing against Louisville and was lucky not to have thrown multiple interceptions after the Cardinals dropped repeated chances for turnovers. Book hasn’t thrown for a touchdown in two of his past three games and continues to lack the comfortableness passing that he had previously shown in years’ past. He at least has continued his success on the ground, rushing for at least one touchdown in three straight games, but will need to tighten things up in the pocket if the Irish can expect to continue their winning ways.

As Ian Book goes, so goes the offense, and because of that, you can see why their receiving stats are down across the board. No Irish player had more than two receptions a week ago against Louisville, and top targets Javon McKinley and Tommy Tremble only had one apiece. With Braden Lenzy questionable to play on Saturday, Book and the Irish passing game will need one of their receivers to step up as McKinley and Lenzy are the only ones at the position with more than five receptions on the season.

Notre Dame’s defense has put up Top 20 stats in every significant defensive category this season, including 11th in total yards allowed and 4th in scoring. That is all well and good, but they have also forced just three turnovers through four games, and with the offense not necessarily clicking on all cylinders, they may be relied upon even more so as the schedule gets more difficult starting this week. The Irish opponents so far have combined for a 5-16 record, but their next five up have a total mark of 16-9.

The Panthers have had consistent success under head coach Pat Narduzzi in terms of upsets, with outright wins against 3rd ranked Clemson in 2016 as a 21 point underdog, 2nd ranked Miami in 2017 as an 11 point underdog, 23rd ranked Virginia in 2018 as a 7 point underdog, and last year against 15th ranked UCF as a 10 point underdog. They have also gotten a majority of their wins of late versus inferior opponents, though, with 12 of their last 14 victories against FBS level teams that either ended their season with a losing record or are on their way to this year. The biggest variable going into this week is the health of Pittsburgh quarterback Kenny Pickett. The senior leader hasn’t had a great amount of success against top tier teams. He has just three touchdown passes in eight games against top 20 opponents, but the dual-threat ability and experience intangibles he brings cannot be understated. If he plays, I would take Pittsburgh. If he doesn’t play, and that is the way things are leaning, I would give the 10 points and back Notre Dame. As an added bonus, the under is 6-2 in the last eight Irish road games, 9-4 in the last thirteen Pitt home games, and 16-6 in the previous 22 games in which the Panthers were underdogs. If Pickett is out, I would double up and take the under as well.

Mike’s Pick to Cover the Point Spread: Notre Dame -10 and UNDER 48. Bet your Week 8 NCAA football picks FREE by grabbing a 100% real cash bonus on your first deposit of $100 all the way up to $1000 at BetNow Sportsbook!