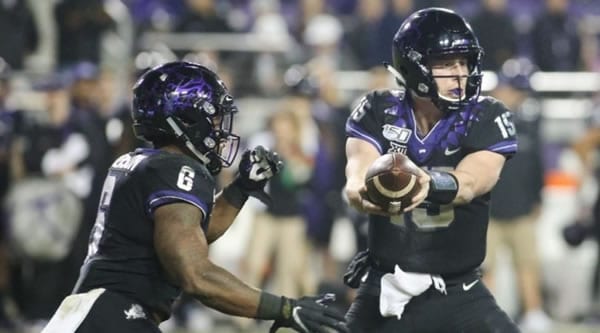 Takeaways From When The Sooners and Frogs Were Last In Action

The Sooners step into this game on two-weeks rest after commemorating what would have to be a must-needed win in its rivalry clash with the Texas Longhorns in the annual Red River Showdown. Four overtimes were required to determine a winner, but the Sooners were able to get the job done and cover while they were at it, winning 53-45 as a three-point favorite.

The Horned Frogs come into this game on a much more somber note. TCU, like OU, has enjoyed an extra week of hiatus to prepare for this contest, and they probably need it to. The Frogs were spotting 11 to visiting Kansas State when the two met in Fort Worth on October 10th, but the points weren’t required as the Wildcats staged an outright 21-14 upset of Texas Christian.

How the Public is Betting the Oklahoma-TCU Game

The Sooners opened up as a 5.5-point favorite but quickly accelerated to their present position as a 6.5-point choice. This indicates a heavy lean on Oklahoma out of the gate.

Oklahoma presently owns a six-game winning streak against Texas Christian. Expanding to a ten-game sample between both sides, the Sooners have won nine of these previous meetings.

This series has seen a collection of betting streaks enjoyed by both participants. TCU covered in the last meeting between both sides in 2019, where it was taking back 19 points but fell 28-24 when it traveled to Norman. Previous to that, OU had covered in four straight meetings, preceded by a three-game Texas Christian cover streak. It is worth mentioning that Oklahoma was favored in all of these previous bouts, making them 4-4 ATS as the chalk in the last eight matches.

Eight Oklahoma players are presently sporting questionable tags for a variety of undisclosed reasons and eligibility concerns. None of these personnel are key starters or impact players for the Sooners, per se.

TCU can take advantage of a buy-low, sell-high spot here against the Sooners. The Frogs were heavily faded by the public when they were up against Kansas State, and the underdog not only took its takers to the window but staged yet another upset. This diminishes TCU’s overall credibility and positions them to be working with an inflated number. On the flip-side, Oklahoma has likely altered its market trajectory after winning against Texas in the Cotton Bowl two weeks ago. After all, those that got behind Oklahoma in the Red River Rivalry have found themselves on what seemed to be a perpetual end of ripped tickets. OU getting the job done can easily restore bettor confidence in the Sooners, and as a result, we can expect to be paying a premium here to get behind Oklahoma no matter what number they are offering. When we toss in the fact that Texas Christian also has home-field advantage and played what on paper was a better Oklahoma side tougher on the road last year, the Frogs will believe that they can win this one outright for sure.

Though Oklahoma won against Texas and covered while they did so too, they didn’t do themselves any favors as they did so. Against the Horns, the Sooners blew a fourth-quarter lead yet again, and they even botched the winning field goal in overtime after it blocked a Texas field goal attempt in the previous OT possession. It just so happened that Oklahoma got the ball in the fourth overtime period, scored a touchdown, and converted on the two-point conversion, forcing Texas to attempt to do the same where an interception was the difference-maker. While I had no issue spotting a field goal to Texas given the fact they were prone to be overvalued anyhow, I am not going to recommend spotting bigger lumber to a team that quite frankly you can’t get away with letting them hang around. Texas would know a thing or two about that since thisn same Horned Frogs team marched into Austin and beat UT outright 33-31 as an 11-point dog on October 3rd. I wouldn’t be shocked if TCU struck again here, but I’ll take the points. Bet your Week 8 college football picks FREE by taking advantage of a 100% REAL CASH bonus at one of the web’s best college football gambling sites —> MyBookie Sportsbook