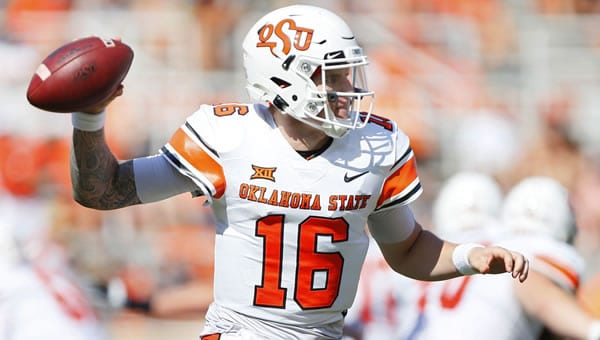 The Cyclones come into this game on a bye preceded by a 31-15 victory at home against the visiting Texas Tech Red Raiders. Iowa State covered the number as a 10-point favorite come kick-off.

Oklahoma State also comes into this game on a bye after a dominant 47-7 win on the road against the Kansas Jayhawks. As a 21.5-point choice, there was never any doubt that the Pokes would cover the number in what was a wire-to-gate thumping of KU.

How the Public is Betting the Iowa State-Oklahoma State Game

In the early stages of this market, we have seen action roll in on the Cyclones. The Pokes opened as a four-point favorite and have descended to a 3.5-point choice.

These two teams last met in 2019 in Ames, Iowa, where the Cowboys would defeat the Cyclones 34-27. Iowa State cashed in as an 11.5-point underdog. In the previous ten clashes between these two sides, Oklahoma State has won eight of them.

As we have seen in other Big 12 series, the Iowa State-Oklahoma State affair has been one of betting streaks. Previous to last year, the Pokes held a four-game cover streak against the Cyclones, which was preceded by ISU covering three in a row against the Pokes. Oklahoma State has been the favorite in the last ten contests, and alas, have gone 5-5 ATS as the chalk over this span.

Heading into this Big 12 bout, neither Oklahoma State nor Iowa State has listed any injury concerns to key personnel.

For a very long time, Oklahoma State has been regarded as a team that can throw its hat in the proverbial Big 12 ring but never delivered the goods to back up the acclaim. However, this edition of the Pokes is one that can exceed expectations and win the conference outright. The irony of it all is that many speculated that the two teams that would win this conference were either Oklahoma or Texas. I can appreciate it that certainly since Oklahoma has ruled the Big 12 with an iron fist for the last five years, and Texas has the talent that is comparable to any team in America. However, both OU and UT have clearly taken a step back this year as they have deficiencies on defense and have a propensity to blow leads. I haven’t seen that from the Cowboys. Oklahoma State is a more balanced team by comparison as they get it done on both sides of the football. For a team that has historically lived and died by their offense, Oklahoma State’s defense is impressive, surrendering just 9 points per game (2nd in the FBS). When we consider that their defense is complemented by a bell-cow rusher and Heisman Trophy watch-list talent in Chubba Hubbard, this team has the blueprint to surprise many in the Big 12 race, and this contest will be an opportunity for Oklahoma State to do just that.

The stock is high on Iowa State at the moment, albeit they and Oklahoma State are probably the two best teams in the Big 12. However, Iowa State’s portfolio of victories is going to resonate more strongly with the market since they have a road win over TCU, an upset win over Oklahoma, and a dominant showing against Texas Tech to follow this up. The Pokes own wins over Tulsa, West Virginia, and Kansas, which will not enchant action. For ISU, the UL Lafayette upset that the Cyclones endured to kick off the 2020 campaign has been all but forgotten. However, I have not. Oklahoma State could have been stung by the upset bug at home when Tulsa came to town in September, but the Pokes found a way to overcome the Golden Hurricane even if the 16-7 result looked poor on paper. It is those kinds of intangibles that trust me getting behind the Pokes here, they have been getting better every week, and come December, there may be a discussion behind where this team will be heading in January. I wouldn’t be shocked if it was to a New Year’s Six Bowl at minimum. I’ll lay the points with the Cowboys. Bet your Week 8 college football picks FREE by taking advantage of a 100% real cash bonus on your first deposit of $100 to $300 at MyBookie Sportsbook!