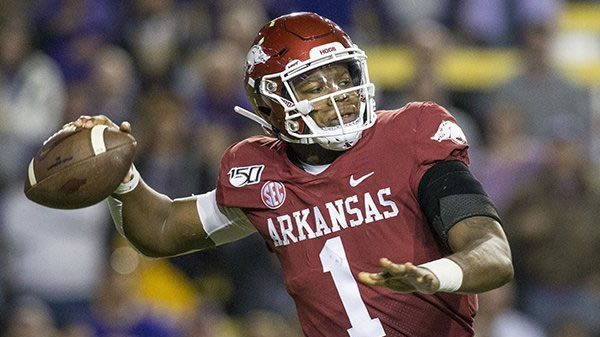 This is the time for Arkansas to prove that it’s for real, as the Razorbacks have played two weak opponents and Texas in this young season and looked pretty good doing it. But there is a big difference between beating Georgia Southern and taking down one of the strongest squads in the SEC West, especially one that Arkansas hasn’t seen success against since the days of the Southwest Conference.

The last time the Razorbacks actually beat the Aggies was 2011, the year before Texas A&M actually joined the SEC. Since then, the Aggies have only gotten stronger, as Jimbo Fisher has taken the mediocrity left from Kevin Sumlin and turned it into a genuine national power. With two weeks to go until Alabama comes to College Station, this is the time for A&M to prove that it’s worthy of the hype, as the Aggies haven’t yet played anything close to their best football

How the Public is Betting the Texas A&M/Arkansas Game

The public is backing the Razorbacks here, and sharp money hasn’t gotten involved on the other side yet. The totals and spread have held firm, despite the Razorbacks getting 66 percent of all tickets.

Arkansas:
Defensive lineman Dorian Gerald (leg) is out for the season.

Playing Georgia Southern was somewhat decent preparation for Arkansas’ defense because the Aggies are likely to go with a ground-first attack in this one. The reasons are two-fold: the Aggies have an excellent back in Isaiah Spiller and don’t fully trust Zach Calzada to get the job done at this point in his career. Calzada has an excellent arm, but his decision-making is about what you might expect for a redshirt freshman, which is to say it will get better with experience.
The Aggies will instead need to control the game on the ground, which Spiller should allow them to do quite well. A&M has averaged 184.7 yards per game in three games, and Spiller has been almost unstoppable, averaging more than six yards per carry. There is some worry about the A&M offense when it gets to the red zone, however, as the Aggies have shown an annoying tendency to shoot themselves in the foot when they get close to scoring. So far, they’ve put up 85 points on the season, not exactly a high number considering the quality of opposition.

Arkansas has played two bad quarters out of 12 so far this season, and the Razorbacks were fortunate that they A. squeezed them into the same game, and B. did so against Rice. Arkansas has mostly played solid football ever since then, mainly based on their ground game. The Razorbacks’ attack looks more like the days of Darren McFadden as of late, as Trelon Smith and Raheim Sanders have chewed up yardage so far.

Even better, K.J. Jefferson runs the ball just as much as last year’s quarterback Feleipe Franks did, except Jefferson, is a lot better at it. Franks averaged just two yards per carry; Jefferson’s numbers are at the 7.5 mark. The Razorbacks are a little too dependent on Treylon Burks in the passing game, as no other Razorback has more than six catches on the season. But that’s something that can come with time, and passing isn’t how you beat Texas A&M anyway. Aware that he shares a division with Alabama and Mississippi, Jimbo Fisher has built a strong pass defense that’s holding opponents to just 78 yards a game through the air. Where the Aggies struggle is on the ground, as they’ve been gashed for 162 yards a game.

Arkansas is used to being an underdog. The Razorbacks have been getting points in their past 32 SEC games, a streak that dates back to a 2017 game at South Carolina where the Razorbacks were giving three points (and lost by 26). But the Razorbacks have quietly gotten a lot better in the past year-plus under Sam Pittman, and they’ve covered in nine of their past 12 in the SEC despite being dogs in every one of them. That includes three straight covers against Texas A&M, even as the Aggies have kept winning the game every season.
What these teams have not done consistently is stop the other one. Only 2018 saw fewer than 58 points scored in the past five matchups between the two rivals, with last year’s game combining for 73 points. The 47.5 number comes from A&M’s defense playing lights-out while its offense is struggling with a backup quarterback, but historically, these teams should zoom past the number.

With 88 degrees expected to be the temperature at kickoff in Arlington, look for this game to be played indoors, so the players aren’t suffering from heatstroke on the field.

Arkansas has actually looked the more impressive of the two and knows how to play against A&M. The Razorbacks were expected to finish dead last in the SEC West, but they’ve already matched last year’s win total and should be a much tougher out than people think.

I’m not bold enough to pick the Razorbacks to win the game outright, but I think they’ll cover the 5.5 points. Question: Did you know that you could be betting on games at -105 odds instead of the more expensive -110 your bookie is socking you? Imagine how much cash you’d save over the years if you were saving five bucks per hundred you’re trying to win! It trumps the heck out of ANY bonuses you can get! Be smart! Make the switch to BetAnySports today!