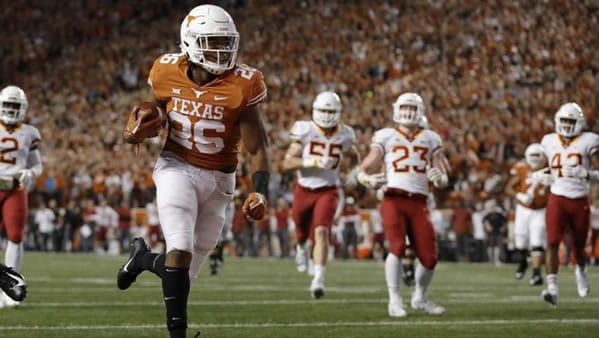 The Longhorns come into this game on the heels of a stunning home defeat incurred against the visiting TCU Horned Frogs. As an 11-point favorite, the Hook Em’s were shocked in a 33-31 loss in Austin.

How the Public is Betting the Red River Rivalry Game

As it stands, 51% of the public is leaning toward Texas, who opened as a 2.5-point underdog. Since the line opened, we have seen the line fall by a point to its current position which reveals that the money has been coming in on the Horns.

The rivalry itself needs no introduction; however, Oklahoma has been the better side for the most part in recent memory. The Sooners have won four of the last five meetings overall. The Sooners finally defeated the Longhorns in last year’s Red River Rivalry game in October in a 34-27 OU win. Texas was able to sneak through the backdoor to cover as an 11.5-point underdog with a late score when the game was seemingly well in OU’s hands.

AS YOU KNOW, 5DIMES HAS LEFT THE USA BETTING MARKET. YOU CAN STILL BET ON GAMES AT -105 ODDS THOUGH! BET -105 REDUCED ODDS AT BETANYSPORTS!

Heading into this epic rivalry showdown, the most notable injury comes from the Texas camp as Running Back Rochon Johnson is listed as questionable after sustaining a shoulder strain. His battery mate Keaontay Ingram is also listed with a Q-tag as he battles an undisclosed injury. The absence of both Texas running backs potentially could spell a huge concern for UT’s rushing operations.

Oklahoma’s offense is very much still firing on all cylinders as it collates over 513 yards of total offense per game (8th in the FBS) and averages 37.7 points per outing. Texas’ offense leads the nation in scoring at the present moment (51 points per game). In a game with such an offensive connotation, the question remains as to whose defense is the stronger of the two to perhaps generate a much needed final stop. My money would be on Oklahoma in that capacity. Sure, the Sooners may have lost their last two games but then again, look at who they lost to and how they lost. The problem for Oklahoma is not so much whether their defense can stop opposing offenses. They have demonstrated that they can do so for at least three quarters against both K-State and Iowa State. The issue is whether this team can finish and hold on the football as it does so. Texas, on the other hand, they are lucky to have escaped Texas Tech two weeks ago, who hung 56 on them, and TCU managed to score 33 on them with little resistance. Oklahoma’s offense is better than both these squads, so I see this is a potential mismatch as the Sooners will be able to generate stops against Texas’ offense. However, will Texas be able to slow down Oklahoma? That question marks make the Horns a dangerous play in my book.

To be honest, I’ve had this game circled on my calendar before the season started, as I suspected OU would bode value in this spot by the trends working against them alone. However, it doesn’t stop there. The bottom line is Texas remains a ranked team at (22) while Oklahoma is unranked. When I see an unranked team that has not been favorable in a series in recent history laying points to a ranked opponent, the prudent move would be to lay the points with said unranked team. Sure, Texas has been profitable in this series from an ATS perspective, but the Sooners have the emotional advantage of owning the Horns for the most part in this rivalry game. This is the ideal spot for Oklahoma to get back on track, and in this instance, we are in a rare occasion getting them at a reduced price. I trust Oklahoma will win this game by a field goal at a minimum. Bet your Week 6 college football picks for FREE by taking advantage of a 100% real cash bonus on your first deposit of $100 to $500 at Betnow Sportsbook!