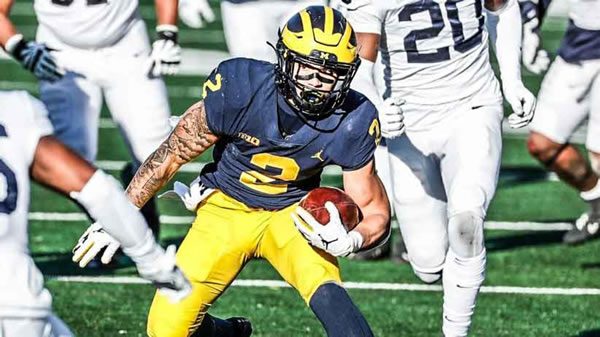 Former Michigan running back Mike Hart’s line in 2007 about Michigan State being Michigan’s “little brother” now seems to have been said almost ironically because little brother has smacked around a big brother for the past 15 seasons. Since Hart’s comment, Michigan State has won 10 of 14 meetings with Michigan and has even gone 5-2 against Michigan in Ann Arbor. Before that comment, Michigan State hadn’t beaten Michigan in Ann Arbor since 1990, making it pretty clear just how much things have turned in the Great Lakes State over the past 15 seasons.
But this year, Michigan State comes in looking more like a wounded duck than a dominant force, and big brother appears ready to smash little brother’s face in as payback for all the humiliation of the past 15 years. While the Spartans need to win three of their final five games just to get to a bowl game, the Wolverines have their sights firmly set on Ohio State and winning another Big Ten championship. The last time the Wolverines bested the Spartans, they made it pretty ugly, winning the game 44-10. A similar margin of victory isn’t out of the question here.

How the Public is Betting the Michigan State/Michigan Game

The public is divided on this one, with 54% of tickets coming in on Michigan. That hasn’t been enough to move the line in either direction. Nor has the total changed from the opening number of 54.5.

There is some good here from the boys in green. The passing attack led by Payton Thorne is fairly accurate, and there’s a real connection with wide receiver Keon Coleman. That was critical in the Spartans putting up 34 points on Wisconsin and winning in overtime, earning their first Big Ten win of the season.
The problem is that once you get beyond the pass, Michigan State is in trouble. Last year, having Kenneth Walker gave Michigan State an outstanding ground game, but this year, the Spartans struggle to do anything on the ground. Jalen Berger’s 4.5 yards per carry isn’t horrible, but Michigan State often finds itself out of games too early to stick with the ground game because of its horrid defense. That means the Spartans can’t control the clock, and Thorne has to take too many chances too early in the game. It all adds up to a rather large mess that has Michigan State fans wondering if last year’s run was nothing more than a one-shot wonder.

The passing game is not particularly good for the Wolverines, as J.J. McCarthy makes a lot of safe throws rather than forcing the issue in the air. Of course, that’s also in part because he doesn’t have to force the issue in the air with the running game that Michigan boasts. Blake Corum and Donovan Edwards have led Michigan to rank eighth in the nation on the ground, which means Jim Harbaugh can basically play the game in any way he wants.
If the Wolverines do need to pass, McCarthy is capable of moving them down the field and creating some offense. But he often doesn’t need to because Michigan effectively keeps opposing offenses chained to the sidelines and watching the game. That was the Wolverines’ game plan against Iowa, as Michigan turned the Hawkeyes’ usual strategy on its head by keeping the Iowa defense on the field. It worked out because Iowa didn’t score until getting desperate in the fourth quarter. If Michigan doesn’t want Michigan State’s offense on the field, the Spartans won’t be seeing much of the football.

Michigan bettors have seen two problems with the Wolverines this season. First, they’re inconsistent. The Wolverines play great one week and then play down to the level of their competition the week after, which led to them failing to cover against Indiana and Maryland. Second, the Wolverines sometimes draw such large spreads that there’s little chance of a cover. That happened in the Hawaii win, where Michigan won by 46 and didn’t cover.
But in a rival game, especially one where Michigan State has tortured Michigan for so long, Harbaugh might be encouraged to go for the throat when he clearly has the upper hand on Mel Tucker. Michigan State is 6-1 ATS in its past seven trips to Ann Arbor and 5-2 SU, and it’s pretty likely that Harbaugh hasn’t forgotten any of that going into this matchup.

The night is going to lead to Big Ten football weather, with temperatures falling into the mid-30s during the evening. The wind won’t affect the passing game too much, as winds will only blow at five miles per hour east-southeast.

To me, the best bet on the board is probably Michigan State to go under its team total of 15.5 points. There’s little reason to expect the Spartans to do much against the Wolverines’ defense, given how poor Michigan State has looked on offense this year. The Wolverines should win this game handily, but a high spread is never an easy play to hit.
Because it’s a rival game, I do think Michigan has payback on its mind. Give me the Wolverines.