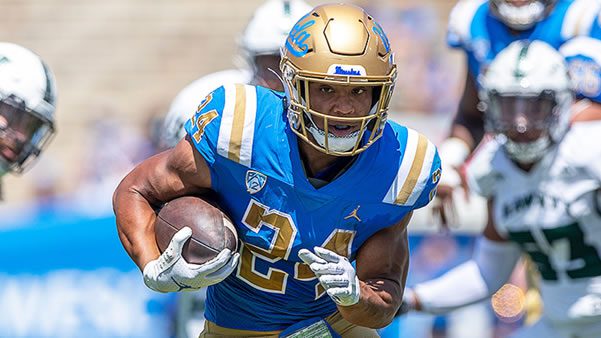 Could this be the last time that Stanford ever makes the trip to the Rose Bowl to face UCLA? It’s looking that way, thanks to UCLA and USC’s decision to ignore geography and link up with the Big Ten. After the schools fought to make sure that they’d keep playing each other in a Pac-12 that included divisions, there are likely to be no more meetings between the two schools for a while.

And that might be just fine with UCLA because this really hasn’t been a fun experience for the Bruins to host the Cardinal. UCLA has won its past two trips to Stanford, but the Bruins haven’t beaten the Cardinal at the Rose Bowl since 2008. Stanford has won six straight as the visiting team and 12 of the past 14 meetings overall. The Rose Bowl has really been Stanford’s home away from home for some time now, as the Cardinal have scored at least 30 points in five of their past six trips to Pasadena.

That shouldn’t happen this time around because UCLA looks like the far superior team. But weird things have happened in this stadium for Stanford in years past, and the Cardinal does come in having played its past three games down to the wire. Stanford might not make this seven straight wins in the Rose Bowl, but there’s every reason to expect that the Cardinal can cover a large number.

How the Public is Betting the Stanford/UCLA Game

The public is riding hard on the Bruins, as 68% of the tickets have come in on UCLA. The money, on the other hand, is heading Stanford’s way. Despite the number of tickets on the Bruins, the line hasn’t moved, suggesting that sharps are backing the Cardinal. The total has ticked up a point from 63.5 to 64.5.

Stanford already lived and died by the passing of Tanner McKee this season. Now the Cardinal have to play without Filkins and Smith, who are only their two best running backs. Together, they’ve amassed 684 of Stanford’s 868 rushing yards, and nobody else on the team has more than 16 carries. So the job now falls to Caleb Robinson, who’s been decent on the few touches he’s had but hasn’t really shown that he can handle a full workload. To make matters worse for the Cardinal, top receiver Michael Wilson also won’t be playing, leaving Elijah Higgins and Brycen Tremayne to try to attack the UCLA secondary.
And that’s the one bit of good news for the Cardinal: the UCLA secondary is not very strong. The Bruins don’t defend the pass well, which should allow McKee to find holes in the defense and keep the chains moving. Stanford is going to have a tough time producing points without three of its best weapons, but at least it has the edge in terms of attacking UCLA’s weakness.

When UCLA Has the Ball

Here’s the reason for Stanford to really worry in this game: Zach Charbonnet. Yes, Dorian Thompson-Robinson is a fine passer and a big part of the Bruins’ success in 2022, but Stanford’s pass defense is actually pretty decent. The run defense, however, is horrid, and Charbonnet should be able to take advantage of that all day long. Stanford gives up 187.6 yards per game, which is basically an open invitation for UCLA to run the ball as much as it wants.

The Bruins haven’t gotten stopped by anyone this season, as even Oregon surrendered 30 points in UCLA’s one defeat on the season. How effective UCLA is will be a question of how the Bruins choose to attack Stanford. If they go right at the Cardinal’s weakness with Charbonnet, it’s difficult to see how Stanford can keep itself in the game. If they instead try to go to the air, it will probably still work out, but the Cardinal might be able to hang around.

Backing Stanford in this matchup has worked wonders, as the Cardinal are 5-0-1 ATS and 6-0 SU against the Bruins in their past six trips to Pasadena. They’re also 10-3-1 ATS overall, so it isn’t just the Rose Bowl that leads Stanford to success in this matchup. However, those were also different Stanford teams. The Cardinal are just 1-8 ATS in their past nine games on grass and 1-5 ATS in their past six road games.
Meanwhile, there are two types of teams Chip Kelly knows how to have success against Pac-12 teams and teams with losing records. This further begs the question as to why UCLA thinks going to the Big Ten is a good idea, as neither of those is common in that league, but Kelly is 9-0 ATS in his past nine against teams with a losing record and 6-1 ATS in his past seven against Pac-12 opponents.

The night should cool off southern California somewhat, but temperatures should still sit in the mid-60s with very little wind or threat of precipitation. Wind will blow north-northeast at four miles per hour.

If Stanford was healthy, I’d say the Cardinal would be the play here. They have the history, they have played well recently, and this game could be a bit of a trap after the loss to Oregon for UCLA. But Stanford isn’t healthy. The Cardinal are missing their three biggest weapons besides Tanner McKee, which means they will be lucky to score enough to stay with UCLA.

I’m not trusting the Stanford defense to keep the Bruins in check here. Give me UCLA.