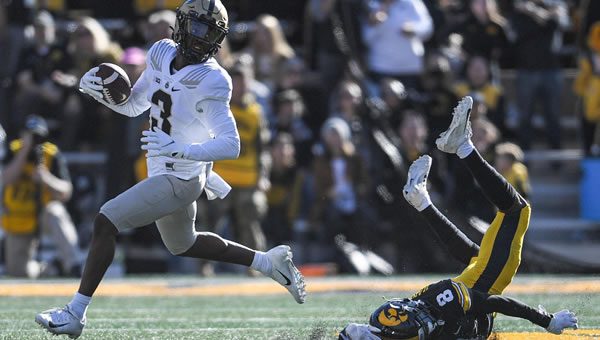 Where: Ross-Ade Stadium - West Lafayette, IN

There has been no shortage of big-time upsets in college football this season, and one of more shocking came last week when Purdue went into Iowa City and toppled the NO.2 ranked Hawkeyes. That result has put the Big Ten West up for grabs, with Wisconsin and Purdue both in control of their own destiny as they prepare to play this Saturday. This is familiar ground for the Badgers, but the Boilers haven’t won the Big Ten since 2000 and are ranked for the first time since 2007. Wisconsin has struggled outside of the Eastern Michigan and Illinois contests, including last week when they edged Army, but the prize is there for the taking if the offense can find their way and help out a top-notch defense. Wisconsin has won each of the last ten meetings between the schools.

Wisconsin is just 1-7 against the spread in their last eight conference games and 3-8 ATS in their last eleven games overall. If you want a pro-Badgers stat, they are 15-6 ATS in their last 21 as a road favorite. Purdue is just 3-8 ATS in the past eleven overall but is 8-2 against the spread in the last ten when they are the home dog. The UNDER has a 6-1 mark in the last seven when Wisconsin plays in conference, and the UNDER has hit in each of the last seven overall for Purdue. Heading into Wednesday, about 60% of the public money is on Purdue, with the under seeing about 53% of bets.

Stuck in the Mud

Wisconsin would be a force in the Big Ten and beyond if they could just move the ball with consistency. That just hasn’t happened, however, and the Badgers enter the week ranked 90th in total yards and 115th in scoring at 19.7 points per game. The offensive line has been shuffled over and over in an effort to find the right mix, but it hasn’t paid off, and Wisconsin cannot move the chains and power the play-action pass. Sheer volume has the run game ranked a respectable 27th, but there is too much pressure on Graham Mertz, and he hasn’t risen to the challenge with just two touchdown passes against seven interceptions. Braelon Allen has come out of nowhere to give the backfield a new wrinkle. The 17-year old freshman weighs in at 235 pounds and has averaged 6.3 yards per carry since winning the backup spot behind Chez Mellusi. Wisconsin does have three quality receivers in Kendric Pryor, Danny Davis, and TE Jake Ferguson, but the passing game is mired at 116th in the land. The defense remains at a championship level, ranking only behind Georgia in total yards allowed with the 7th-best third-down defense.

Purdue has struggled to move the ball on the ground, especially without Zander Horvath, but the passing offense sits 10th at 334 yards per game. The Boilers averaged just 2.6 yards per carry against Iowa but threw for 378 yards, and that kind of performance will likely be necessary again against the Wisconsin run defense. Aidan O’Connell and Jack Plummer have seen success at QB, but it has been O’Connell getting the starts most recently, and he is hitting on 69% of his passes with six touchdowns against five picks. David Bell is averaging 17.9 yards per reception and is 8th in the NCAA with 679 receiving yards. Purdue has four receivers with at least 20 receptions, so O’Connell will have options even if Wisconsin can limit Bell. Purdue’s defense isn’t as dominant as Wisconsin’s, but the Boilers are 14th in total yards allowed with top-30 marks against the run and the pass individually and allow just 14 points per game. Four-year starter George Karlaftis has as much experience as any defensive end in the country, and he leads the team in sacks and tackles for loss. Safety Cam Allen collected two interceptions against Iowa to bring his total to three on the season.

More Picks: Get Dan’s OU/KU Prediction Versus the Spread >>>

Bucky gets the Hammer

Wisconsin has owned Purdue for more than a decade, but all good things must come to an end, and the Badgers are in trouble this Saturday. The Wisconsin offense is just too ineffective to score points with regularity, and that puts their defense in a position where they cannot make a mistake. Penn State, Notre Dame, and Michigan all figured out the Wisconsin defense after some initial struggles, and Wisconsin never had a lead to absorb it and bounce back. The Badgers ran the ball 43 times last Saturday yet managed just 18 first downs and 20 points. In previous seasons, 43 attempts would have been a sign that Wisconsin had 35 on the board and was ahead by three scores. That just isn’t happening anymore, and it has exposed the lack of consistency with Mertz and the passing game. Purdue is far from perfect, but they have the better offensive output at the moment and the more reliable means to get points on the board. Wisconsin’s secondary is the weakest spot of the defense Purdue will eventually get some big plays downfield. I don’t think Purdue gets another 300-yard passing day from O’Connell, but they shouldn’t need it. Purdue’s biggest enemy might be the letdown factor that can come after a big upset, but they should be able to shake that and keep their momentum. The under is a very prudent play, but I think Purdue is a great money line look as well. I’m definitely taking them with the points and calling for a 20-16 Boiler win.

Ted Walker’s Pick to Cover the Spread: Purdue. Did you know that you could be betting on games at -105 instead of -110? Do the math! Betting at reduced odds will save you THOUSANDS of dollars over time! Click here to sign up now!