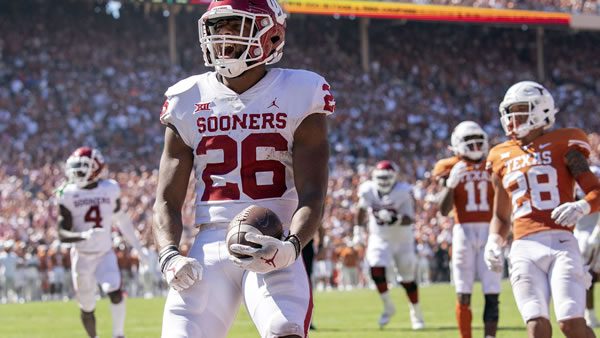 Most of the Big 12 might hate the idea of Oklahoma leaving for the SEC, but Kansas probably can’t wait to help the Sooners pack their bags. The Jayhawks have lost 20 in a row to the Sooners and haven’t beaten Oklahoma in Lawrence since 1997. In short, Kansas hasn’t been competitive against anybody in the Big 12 this season. Making this team about the last team in the world the Jayhawks want to see at the moment.

Oklahoma, however, hasn’t really shown that it’s been worth backing for most of the season. The Sooners have been allowing too many teams to hang around with them, and if they don’t get things figured out soon, they might be ripe for an upset when the likes of Iowa State and Oklahoma State come calling. Kansas, however, isn’t likely to give the Sooners any trouble, and if the performance of the Oklahoma offense in the past two games is any indication, the Sooners might just be ready to turn the corner.

How the Public is Betting the Oklahoma/Kansas Game

The number has already moved in Oklahoma’s direction, as the Sooners have seen the spread tick up from -38 to -38.5. The public is high on the Sooners, as 76 percent of all tickets have come in on Oklahoma to this point. However, it hasn’t been enough to move the total, which has hung tight at 67.5.

Caleb Williams seems to be the quarterback that Oklahoma needed all along, and with him on the field and Spencer Rattler on the bench, the Sooners now appear to be a team that isn’t going to beat itself with mistakes. Rattler didn’t cause Oklahoma to lose any of the games he started in 2021, but he made things much more complicated than they needed to be with ill-timed turnovers.

Williams, so far, has avoided the mistakes while putting up touchdowns. He tossed for four against TCU a week ago and had just five incompletions. Of course, it also helps when you get to hand the ball to the likes of Kennedy Brooks, who rushed for 153 yards and a score in keeping the Horned Frogs at bay throughout an Oklahoma win. Oklahoma looks far more comfortable with him in control, and as long as it’s not stopping itself, it’s difficult to see how Kansas can slow down a Sooner attack that’s been putting up points like nobody’s business.

If the Kansas offense is going to cover this spread, Jason Bean is going to need to give a performance much more like the one he did against Duke rather than Texas Tech or Baylor. Against the Blue Devils, Bean looked like a competent college passer, throwing for 323 yards and keeping the damage to a minimum for the Jayhawks in a 52-33 loss. Against the Red Raiders, however, Bean only threw for 80 yards, and Kansas spent most of the game chasing it and trying to get the Texas Tech offense off the field.

The Jayhawks remain handcuffed by the decision to fire Les Miles when they did, as they gave current coach Lance Leipold little time to bring his own players and people to Lawrence. He’s had to try to win with the players Miles left him, which was a group short on talent and success, before trying to learn how to play a brand-new system. Kansas has been a team trying to discover its identity all season long, and the Jayhawks are likely to see things get worse before they get better.

The Sooners have been getting the job done by their standards, but they have struggled to cover spreads at times. Oklahoma has covered just three times this season out of seven, but the Sooners have covered in both of their most recent games against Texas and TCU. The Sooners have also been strong in the Big 12, covering in eight of their past 11 games in the league.

That said, Oklahoma has had a bad habit of letting Kansas stay a bit too close: the Sooners have one cover in their past five trips to Lawrence.

Showers could play a role in this one, as a storm will be moving into Lawrence during the day and could affect the game in the second half. The temperature will cooperate well, as temperatures will sit at 68 degrees at kickoff.

Giving this many points is hard to do, but the reality is that Kansas is almost devoid of FBS level talent, and the few players the Jayhawks do have are trying to adjust on the fly to a system that doesn’t fit their skills and a coach they’re still getting used to. On the other hand, Oklahoma seems to have hit its stride and is likely looking to make a statement after sleepwalking through the first half of the season.

I expect the Jayhawks to get blasted here. Give me the Sooners. Bet this game and ALL your sports bets at -105 odds (instead of the more expensive -110 your bookie is socking you) at one of the web’s best betting sites: BetAnySports!