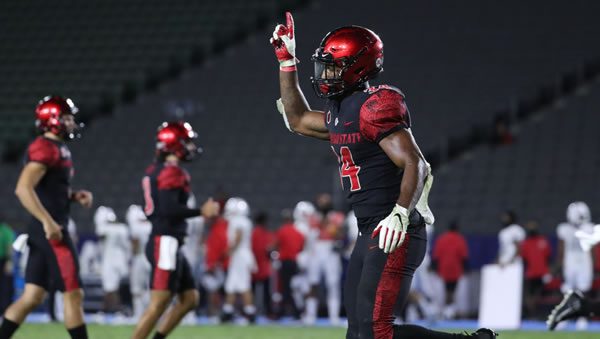 Point Spread: BSU -3/SDSU +3 (Betanysports - Bettors lay -105 on sides and totals here! Not the -110 nonse your bookie is probably hammering you with! Be smart! Make the switch to start saving $!)

The Boise State Broncos take on the San Diego Aztecs on Friday in a key Mountain West Conference battle in Carson. For the Aztecs, they are looking for something big this season. At 10-1, they are on the cusp of the conference title game but still have a tough matchup on their hands in the form of the Broncos of Boise State, longtime conference kingpins who may have slipped some this season but remain a dangerous obstacle for the Aztecs and their plans. The Aztecs took care of business on Friday with a road win over UNLV, 28-20. Boise State, meanwhile, blanked New Mexico, 37-0, on Saturday night, moving their record to 7-4.

Setting the Table for the Aztecs

If they win, they’re in, winners of the West division, and then it’s onto the Mountain West Championship game. They will have a one-game lead on the only team to beat them this season, the Fresno State Bulldogs. If they lose, however, and the Bulldogs beat San Jose State next week, Fresno will go to the title game by virtue of their win over the Aztecs. So San Diego State knows what’s at stake, and one could expect them to act accordingly.

Setting the Table for the Broncos

Boise State is in a three-way tie at the top of the mountain division. While they hold a win over one of the teams in Utah State, they lost to Air Force. Utah State has a slam-dunk with New Mexico in their finale, and Air Force will take on UNLV. Boise catches a tough spot with the Aztecs. All they can do is win and hope for the best. The Broncos have won four in a row after a rough start to the season. So even if their road to a division title seems problematic, I wouldn’t expect them to start slacking off now.

Are the Aztecs Ebbing at the Wrong Time?

Boise is not an easy team to beat, despite a season that was not up to their normal expectations. Boise recently beat Fresno State, underlying the threat they represent this week to the Aztecs. And it’s not like the Aztecs’ 28-20 win over UNLV where they needed a late TD shows them to be in wonderful form. Leading up to that was the loss to Fresno, a one-score win over Hawaii, and a two-point win over Nevada. They’ve been winning, but it’s been a real grind over the second half of the season, with their last conclusive win an early October win over New Mexico. Other than that, it hasn’t been totally smooth sailing, despite an eye-popping 10-1 record.

Good Matchup for the Aztecs?

The Aztecs are adept at running the ball. They can also play the field-position game with the booming foot of Chula Vista kicker Matt Araiza. Between Greg Bell and Chance Bell, they can lay it on thick with the run-game behind a nice line. They add a nice dash of aerial game, and on Friday, QB Lucas Johnson threw three touchdowns. They are also good defensively against the run, one of the best in the nation, and the prospects are there that the Aztecs can render the Boise offense a bit one-dimensional.

Boise, however, relies more on the pass, something they’ve been able to fire up better recently. This is not the Aztecs strength defensively. It’s going to be the Aztecs ground attack against the Boise air attack. And neither opposing defense is best-suited to combat what the other team does best. So while the Aztecs have ample hope that their run-game can take over here, they will still have to out-leg a pretty good offense in Boise’s. And with wins over Utah State, BYU, and Fresno, Boise has shown that what they do well translates at the highest levels.

Can Aztecs’ Defense Have a Say?

Ranked in the top 15 in terms of yards allowed, the Aztecs’ defense has allowed just over 17 points a game on average. Only one team has allowed fewer rushing yards than San Diego State. They also have a playmaking element that can do a lot of damage and flip the script of a game. The pass-rush can be impactful, led by Cameron Davis upfront. They have ball-hawks on the secondary like Trenton Thompson and Tayler Hawkins, while LB Andrew Aleki has two defensive touchdowns. So while vulnerable against the pass in spots, they make up for it with a nice playmaking element on this team.

Dangerous Weapons for the Broncos

The Aztecs defense has thrived in certain spots, but a big part of the Broncos’ recent surge is how well their offense has been playing, consistently applying big doses of the air and ground game. QB Hank Bachmeier has been really efficient lately, working with his top weapon, WR Khalil Shakir. And the explosion in late-season form by RB George Holani has opened up things for this offense, They will be up against it this week, but it’s hard not to take note of the surge.

On one hand, San Diego State is 10-1 with a clear route to the division title, while Boise State needs to first win and then get some major cooperation. But football doesn’t always pan out according to the team’s various agendas. Urgency aside, Boise has simply been getting the better results heading down the stretch. And while San Diego’s recent slippage hasn’t cost them in their last three games, I think it might in this heightened context. I’ll take the Broncos.

Loot’s Pick to Cover the Point Spread: I’m betting on the Boise State Broncos minus 3 points. Bet your football picks for FREE this weekend by taking advantage of a 100% REAL CASH bonus on your first deposit of $100 to $1000 at Betnow Sportsbook! It’s the BEST signup bonus form a LEGIT online sportsbook!