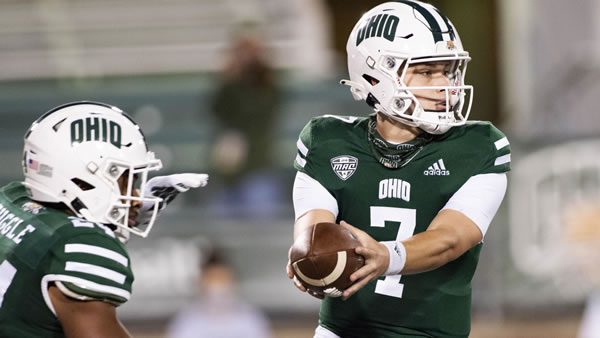 The first instance of Tuesday night MACtion might be the end of the race for the MAC East Division, as Buffalo and Ohio have turned the race on its head in the first four weeks of the conference season. This year was supposed to feature Kent State and Miami deciding the East Division, but the Bulls got past both the Golden Flashes and the RedHawks and now have a chance to all but put the East to bed. With a win here, Buffalo would own a two-game edge on everyone in the East but Bowling Green, and the Bulls already crushed the Falcons earlier this year and own the tiebreaker.

If Ohio wins, however, everything gets thrown into chaos. The Bobcats still have to play both Miami and Bowling Green, so if they win here, they could open the door for as many as five teams to chase down the trip to Detroit for the MAC title game. And an Ohio win certainly isn’t out of the question, as Buffalo hasn’t won at Peden Stadium since 2008. Not coincidentally, that was the year that the Bulls won what remains the program’s only MAC title. Ohio, meanwhile, has made four trips to Detroit but has never come away with the crown. The Bobcats haven’t won the MAC since 1968, and with a passing offense that they haven’t had in years and an improving defense, this is their best chance in a while.

How the Public is Betting the Buffalo/Ohio Game

The public is firmly behind Buffalo in this matchup. The money is too, as the line has ticked up from -2.5 to -3, with 69% of tickets on the Bulls. The total has stayed rigid at 58.5.

Ohio:
Running back O’Shaan Allison (shoulder) is out.

Since an 0-3 start that included a loss at home to FCS program Holy Cross (and to be fair, the Crusaders are now 8-0 in the lower division), Buffalo has roared to life. The Bulls looked dead in the water against Toledo last week, but they came up with 24 fourth-quarter points to overcome a 27-10 deficit and stun the Rockets to remain perfect in the MAC.
Buffalo’s at its best when the Bulls put the ball in Cole Snyder’s hands and let him go to work. The days of Buffalo being a ground-heavy team when Lance Leipold was the coach are over, and under Maurice Linguist, the Bulls have become much more versed in the art of throwing the ball. Both Justin Marshall and Quian Williams have hauled in more than 400 receiving yards and 35 catches, setting up a complex problem for a weak Ohio pass defense. The Bobcats might have given up only 110 yards through the air last time out against Northern Illinois, but don’t be fooled. The Huskies only threw for so little yards because they were missing their starting quarterback and went to a ground-heavy offense against Ohio out of desperation. Had Northern Illinois been healthy, its passing attack likely would have picked apart the Bobcats’ secondary. Buffalo has the personnel to do what the Huskies wanted to do but couldn’t.

When former Ohio coach Frank Solich came to Peden Stadium to be honored at halftime against Northern Illinois, he might not have recognized his old team. Under Tim Albin, Ohio has transformed into a passing outfit that takes full advantage of the gifts of quarterback Kurtis Rourke. Rourke features a strong and accurate arm that is capable of hitting receivers from anywhere on the field and creating big plays from the word go. Against the Huskies, Ohio wasted no time going for the deep shot, as Rourke hit James Bostic for a 38-yard pass to get into NIU territory on the first play of the game. Ohio scored on the drive and was able to play with the lead, completely taking NIU out of its game.
The biggest weapon among Ohio’s pass catchers is also the most surprising, as Sam Wiglusz could hardly be found on most season previews for the Bobcats. But he’s now Ohio’s leading receiver and caught two touchdown passes last week to give him seven for the season. If Buffalo loses track of him, the Bulls will end up paying for it.

It’s been a long time since Buffalo came down to the jewel of the Hocking and left with a win. Ohio has won five straight over the Bulls in Athens and covered on four occasions, with the home team covering in seven of the past eight matchups. When Ohio has bested Buffalo — and the Bobcats are 10-1 against the Bulls in Athens since Buffalo joined the conference in 1999 — they have done it with their offense. Only once has Ohio failed to score at least 34 points against Buffalo in a MAC game at Peden Stadium, their one defeat to the Bulls in a 32-19 loss. Because of that, the over has been a great bet in this series; it has cashed in five of seven meetings in Athens.

MACtion usually means rough weather, but not this time. Alongside the Hocking River, these teams will face temperatures of 47 degrees with little wind or rain in the forecast. Winds will blow at a mere four miles per hour to the northwest.

Both teams should be able to put up some points here. The question is whether Ohio can do enough to keep pace with Buffalo, as the Bobcats’ pass defense has been shredded by teams that can actually throw the football.
I’m not sure Ohio does enough here to stick with the Bulls. I’ll back the over and pair it with Buffalo to cover.