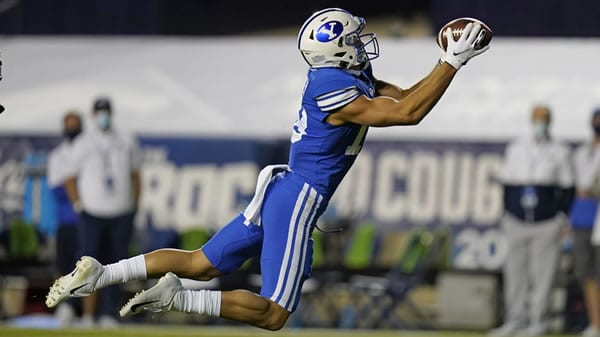 The BYU Cougars take on the Houston Cougars on Friday in a big Week 7 matchup at TDECU Stadium. Both teams achieved a victory of sorts by just making it onto the field last week. BYU was able to nose out a 27-20 home-win over Texas-San Antonio on Saturday to push their record to 4-0. They, however, failed to cover the spread for the first time this season, falling well short as 34-point favorites. The Cougars finally got to play, beating Tulane, 49-31, for a nice win and cover to open their season.

It’s one thing in these challenging times to play in front of no crowds. But BYU has suffered some recent covid setbacks, and their game against Army was canceled. So last week was important to get their season back on track. But for Houston to play their first game of the season in Week 6 tells you all you need to know about how all this has affected their season. Their 18-point rout over the Green Wave showed that maybe it hasn’t gotten to them as some may have anticipated, but it’s worth trying to figure out how this will all resonate. And if last week is any hint, Houston is ready to turn it loose, while BYU looked a little battle-worn already against a so-so UTSA bunch. But that’s just a one-week window.

Why Houston Could be Dangerous

Granted, things didn’t go so well in head coach Dan Holgorsen’s first season at Houston at 4-8, losing a long-serving quarterback, as they now try to work in new starter Clayton Tune. He does have some experience after the starter went down last year. And one source of optimism is all the returning talent around him, such as ball-catchers Marquez Stevenson, Keith Corbin, Tre’Von Bradley, and Jeremy Singleton. They used a deep rotation of backs last week and showed good balance on their way to a 49-point spurt. Tune was nice with 319 yards, two TDs through the air, and another one on the ground, but two picks were costly and could be even more so against an opportunistic BYU defense.

It’s fair to say that BYU came down to earth last week, perhaps becoming victims of their own success. After all, they started the season beating Navy by 52, Troy by 41, and Louisiana Tech by 31, covering the collective spread by a massive 85 points. So for those banking on more of the same last week were left grasping as BYU couldn’t really lay a beating on San Antonio at home, much to their chagrin.

Still, they’re going to be a handful for a lot of teams. Zach Wilson is completing 81.2% of his throws. He has thrown 8 TDs and run in for five more, while throwing just one pick through four games. Converted linebacker and current lead back Tyler Allgeier has been averaging 7.4 yards a run. Experienced Gunner Romney is making big plays aerially with 453 yards, while Dax Milne has stepped up in this offense and has 366 yards. They’ve been a nice 1-2 punch so far this season, and this offense has been looking good. Until last week.

Still, one has to wonder about this Houston defense in this context. And even if Tulane had two defensive scores, it was clear that despite some returning starters for the Cougars on “D,” there is work to be done on that side of the ball. And the thing about BYU’s defense is that they might be exploitable here and there, but they really have an uncanny knack of bringing offensive mistakes to light. And if Houston coughs up the ball as they did against Tulane, this game could get out of hand.

And for a team in Houston to beat a Tulane team that had already played three games shows they were at least able to hit the ground running. However, in this spot, you wonder if a little deflation will ensue in light of the heightened opposition. Against Tulane, all the new pieces Houston is working in didn’t tell as much as it might here. Say what you will about Holgersen, but he’s fashioned some decent offenses over the years and more entrenched in his second season, he could bring more out of this group. But that defense will be up against it, and after watching them struggle last season and in spots against Tulane, it’s unclear if they can make it work in this spot.

Take the Points on the Home-Underdog

As an Independent, BYU sees a lot of different fields. Even so, this is not really their wheelhouse geographically and is another covid-related change, as this one was initially slated to take place in Provo. While Houston has seen games scratched left and right, being able to open at home with two straight games at least means they aren’t being run ragged and maybe even were spared some wear and tear mentally and physically that BYU seemed to have last week in their disappointing performance. This might be a small leap-of-faith, but I saw enough life on both sides of the ball from the Cougars in their last game to warrant some optimism. And with BYU looking like the value has started to wear a bit thin, I think Houston can cover at home. I’ll take the Cougars.

Loot’s Pick to Cover the Point Spread: I’m betting on the Houston Cougars plus 3.5 points. Bet this game for FREE by taking advantage of this sweetheart of a bonus: Deposit $25, get a FREE $50 bet at one of the web’s oldest bookmakers (online since the 90’s!) —> Intertops!