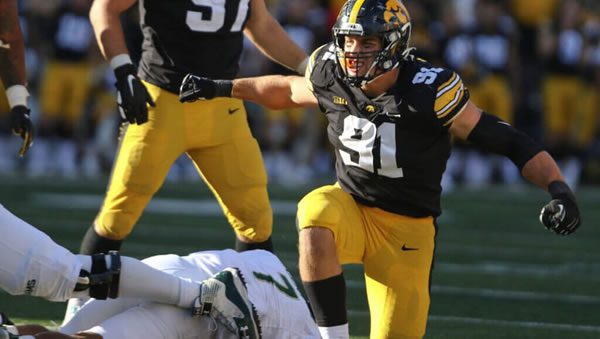 The surprisingly undefeated Maryland Terrapins get their first good test of this season when they welcome the undefeated Iowa Hawkeyes to College Park for a Friday night Big Ten bout. Maryland hasn’t posted a winning season since 2014, but it’s 4-0 for the first time in five seasons. Meanwhile, Iowa is also 4-0 and is now probably the favorite to win the Big Ten West.

The Hawkeyes are favored by a field goal on the road for this one; how are we playing this game with our Week 5 college football pick?

The Week 5 college football betting lines opened Iowa at -4 over Maryland, with an over/under of right around 46. Early betting action at Sportsbetting.ag then dipped that spread to -3.

Any bettors out there thinking the Terps might win this game outright could get upwards of +140 on the college football money line.

The Hawkeyes are 4-0 on the season after beating Colorado State last week 24-14. But it wasn’t pretty. Iowa, playing as a 24-point favorite, drew first blood with a touchdown early in the second quarter but trailed 14-7 at the half. The Hawkeyes then turned a takeaway into a touchdown midway through the third quarter, took the lead for good two minutes later, and added an insurance field goal early in the fourth for the final margin. But Iowa never came close to covering that spread. The Hawkeyes only produced 278 yards of total offense last week and only managed 54 yards rushing on 32 attempts. But they held CSU to 250 total yards.

Iowa opened this season with a 34-6 victory over Indiana, easily covering as a 3.5-point favorite. The Hawkeyes then won at rival Iowa State 27-17 but actually got out-gained by the Cyclones that day 339-173. Iowa then beat Kent State 30-7 and covered at -22.

The Hawkeyes were expected to battle it out with Wisconsin this season for the Big Ten West title, but with the Badgers struggling, we figure Iowa is now a solid favorite to represent that division in this year’s Big Ten championship game.

The Terrapins, meanwhile, are also 4-0 on the season after beating Kent State last week 37-16. Maryland only led the Golden Flashes 7-6 after one quarter but scored three times in the second to lead 24-9 into the half. The Terps then scored touchdowns on their first two possessions of the second half and cruised from there for the victory and the money as 13-point favorites.

Maryland produced 526 yards of total offense last week but gave up 458 yards of Kent State offense. The Terrapins also befitted from a couple of crucial Flashes mistakes in the form of penalties than negated two touchdowns. So in actuality, that game played a little closer than that final score might indicate.

Maryland opened this season with a 30-24 win over West Virginia, then blanked FCS Howard 62-0, then opened Big Ten play with a 20-17 victory at Illinois. The Terps out-gained the Illini that night 481-335 but needed to score the last 10 points of the game to win and came up short ATS at -7.

Maryland was expected to finish in the bottom half of the Big Ten East this season, and while it’s 4-0, it hasn’t proven anything yet. But the Terps are dangerous on any given Friday or Saturday because they can move the ball and put points on the board.

The Hawkeyes are 2-1 SU, but the Terrapins are 2-1 ATS over the three meetings since these teams became Big Ten “rivals” back in 2014. Most recently, three seasons ago, Iowa beat Maryland 23-0, covering at -9.5.

Iowa is the better team here, especially on defense; consider that the Hawkeyes held Kent State, which can move the ball, to only 264 total yards while Maryland gave up 458 yards to the Flashes. Also, playing on the road means the spread is a bit more amenable toward Iowa. So we’re betting the Hawkeyes here, minus the points.