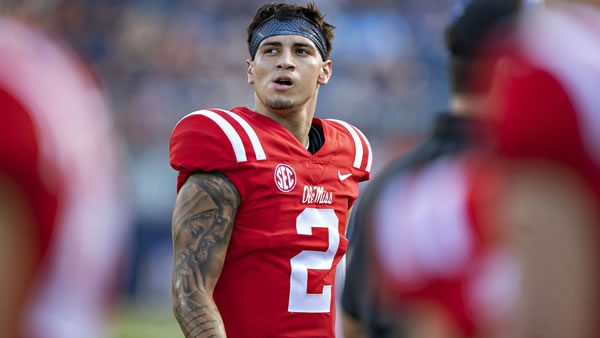 For the 3rd time in the first five games, the top-ranked Alabama Crimson Tide will square off with a top 15 opponent when they host the no. 13 Ole Miss Rebels inside Bryant-Denny Stadium this Saturday. The Crimson Tide blew out no. 14 Miami 44-13 in the season opener and just barely escaped an upset against no. 11 Florida two weeks ago in a 31-29 outcome. On Saturday, Alabama will kick off division play with an SEC West showdown against the undefeated Rebels. Unlike some of Alabama’s prior opponents this season, the Rebels possess a ton of firepower on the offensive side of the football behind QB Matt Corral and should be live 17 point underdogs in Tuscaloosa

The Rebels have kick-started the season with a 3-0 SU record thanks to an easy opening schedule against the likes of Louisville, Austin-Peay, and Tulane. In those three games, the Rebels have outscored their opponents by a combined score of 158-62. Just how good is this Ole Miss team under Lane Kiffen? Well, that is the main question going into Saturday’s showdown against the Crimson Tide. The former Alabama understudy of Nick Saban has produced a ton of fireworks on the offensive side of the football thanks to the outstanding play of QB Matt Corral. The junior quarterback, out of Ventura, California, has produced 997 yards with nine touchdowns and 0 picks through the opening three games of the season. Despite the competition, Corral is performing at a level that is getting national attention and perhaps provides the potential to end the longest winning streak in college football.

For starters, the Rebels are 6-1-1 ATS in the last eight games as more than 7 point underdogs over the last two seasons. So far, I have been correct in every Alabama outing this season and feel I have a good gauge again for this Saturday’s outcome. The Crimson Tide are undoubtedly strong on the defensive side of the ball and are reluctantly effective on the offensive side of the football. QB Bryce Young remains virtually flawless, completing 68% passing for 811 yards with ten touchdowns and 0 picks. With that being said, the one thing that is missing from this Alabama offense is that elite rushing threat that we have witnessed in previous years.

Starting tailback Brian Robinson has produced 208 yards through the opening three games of the season which is not necessarily bad; however, the Crimson Tide have averaged just 132 yards per game on the ground through the opening three contests. Simply put, Alabama does not have that every-down workhorse that we have seen in previous seasons, and I believe that is going to put pressure on Bryce Young as the season continues. The Rebels do not have an elite SEC defense that is going to shut down Alabama’s efforts. However, Alabama is going to need to be flawless to cover, as 17 point favorites against a dynamic Ole Miss offense.

If you look at historical trends, dynamic quarterbacks have been the Achilles Heel for the Alabama dynasty. QB Matt Corral has all the utensils to attack Alabama’s pass defense. More importantly, receivers Dontario Drummond and Johnathan Mingo provide the athletic ability to create space against Alabama’s secondary. The Rebels have the personnel to create problems against this Alabama defense, and that is exactly what I believe will happen. Even with a poor Rebels’ defensive effort, this is a game that the Rebels offense can cover just with their efficiency. I think this is a highly probable play on the underdog and would not be surprised to see the outcome much closer than the experts predict!

Jay’s Pick to Cover the Point Spread: Ole Miss +14.5. Note: Instead of reloading your sportsbook account and receiving NOTHING, you may wanna consider grabbing a 100% REAL CASH bonus on your first deposit of $100 to $1000 at Betnow Sportsbook!