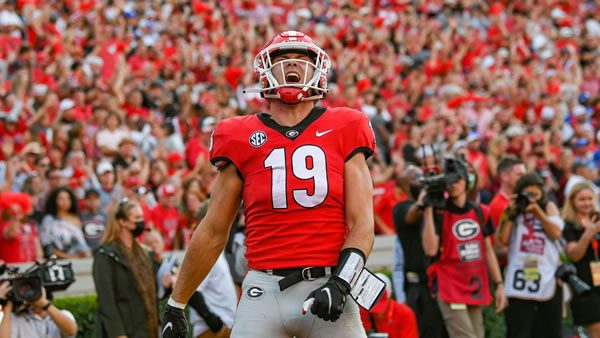 Following the craziest pair of semifinal games in College Football Playoff history, fans and bettors are left with a David vs. Goliath match-up as defending national champion Georgia shoots for the repeat Monday night against Texas Christian. The Horned Frogs grabbed a big lead on Michigan last week and hung on to win the Fiesta Bowl, while the Bulldogs rallied from a two-touchdown deficit to beat Ohio State in the Peach Bowl.

The ‘Dawgs are favored by almost two touchdowns for Monday night over the Frogs. Who do we like for our free college football championship pick?

The CFP betting lines opened Georgia as a 13-point favorite over TCU, with an over/under of around 63. Early betting action then dipped the ‘Dawgs to -12.5.

According to Sagarin’s CFB ratings at USAToday.com, Georgia should only be favored by seven points for this match-up.

Texas Christian reached this CFP championship game by outlasting Michigan in the Fiesta Bowl last Saturday 51-45. The Frogs opened the game with a defensive stop deep inside their own red zone, then scored the first 14 points and led 21-6 at the half. TCU let the Wolverines get within 21-16 in the third quarter, then scored two quick touchdowns to go by 18. The Frogs later allowed Michigan to get within 41-38 early in the fourth, then scored ten quick points and held on from there for the huge victory.

TCU actually got out-gained by the Wolverines 528-488 but returned two interceptions for touchdowns. And that’s basically what decided the game.

The Frogs played 12-0 through the regular season and 9-0 through Big 12 play, winning a whole bunch of close games, before losing the Big 12 championship bout in overtime to Kansas State 31-28. With last week’s win, TCU has now won six games this season by one score, five after trailing in the second half. We just wonder how much longer luck like that can hold out.

125% Cash
12x Rollover
See all sportsbook bonuses
Georgia, meanwhile, reached this CFP title tilt by coming from behind in the fourth quarter to beat Ohio State in the Peach Bowl last Saturday 42-41. The Bulldogs spotted the Buckeyes the first seven points of the game and were trailing 21-7 early and 28-24 at the half. Georgia then gave up the first 10 points of the second half and still trailed by a touchdown late but drove 72 yards to a go-ahead score with just under a minute to go, then survived a late, long Ohio State field-goal attempt at the buzzer.

The Bulldogs produced 533 yards of total offense but gave up 467 yards of Buckeyes offense.

Georgia played 12-0 through the regular season, 8-0 in SEC play, with really only one close call against Missouri. The ‘Dawgs then rolled LSU in the SEC championship game 50-30, one of nine Bulldogs’ wins this season by three touchdowns or more.

On the injury front, the Frogs RB Kendre Miller (17 touchdowns this season) is questionable for Monday night with a bad knee.

The Horned Frogs are averaging 473 yards per game on offense this season, allowing 385 YPG on defense while playing what Sagarin ranks as the 11th-toughest schedule in college football.

TCU got a bunch of big plays to beat Michigan last week, including two pick-6s. It’s hard to believe the Frogs will be as fortunate this week. Meanwhile, after giving up a bunch of yards and points last week against Ohio State, we expect a much better performance from the Georgia defense Monday night. Two touchdowns might seem like a lot to give in a game like this, but the Bulldogs would be 11-3 ATS giving 13 points this season. We like the ‘Dawgs for Monday night. Bet your college football championship pick for FREE by scoring a 100% real cash bonus on your first deposit of $100 to $300 when you use bonus promo code PREDICT100 at MyBookie Sportsbook!