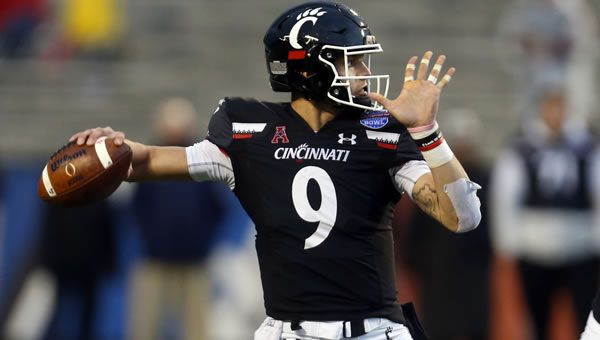 Point Spread: CIN -23.5/USF +23.5 (Bovada - Bet all your Week 11 college football picks for free by bagging a 50% real cash bonus there! Credit cards work for deposits! They have a killer rebate program and lighting fast Bitcoin payouts too!)

The Cincinnati Bearcats take on the South Florida Bulls on Friday in Tampa in American Athletic Conference action. Giving this game some extra marquee value is Cincinnati’s high-ranking and unbeaten record. At 9-0 and ranked second in the AP, they have a lot at stake as they go on the road this week to take on the Bulls of South Florida on Friday. It hasn’t been a great campaign for USF this season, but with three covers in their last four weeks, they look to pay off their supporters again this week,

We’ve seen a subdued Bearcats team the last three weeks, with no covers in that span, including just one-score wins over Tulane and then Tulsa last week in a 28-20 win. For all their success and dreams for big things that may lie ahead, they’ve been pretty average from a betting stance overall, with the same ATS record as their opponent this week. If anything, South Florida has been the better choice the last several weeks. Still, even with some covered spreads, the Bulls at 2-7 have been battered in conference play, whereas Cincinnati is laying conference foes to waste without much trouble.

Going back to last season could be a dubious piece of analysis, but it may still apply with so many familiar faces on both sides. Last season saw the Bulls struggling with a single win on the season. So Cincinnati’s 28-7 win wasn’t so surprising, perhaps. The game was marked by sloppiness. South Florida couldn’t take advantage of an uncharacteristically bad game from Cincinnati QB Desmond Ridder, who had three picks. They threw five picks of their own, and the offense could manage one scoring drive. If looking for some silver lining, seeing South Florida players like RB DeVontres Dukes, WR Mitchell Brinkman, and RB Kelley Joiner make some nice plays last year might bode well for this game.

The Bearcats were 9-1 last season, so it’s not like they did a total about-face this season. But for the often wayward Bulls offense, this looms as a rough spot. Only two teams in the country have allowed fewer points than the Bearcats at less than 15 points a game. The Bulls can run the ball decently in spots. It’s what they’re best at offensively, and it just so happens to be what Cincinnati’s defense does worst. They’ve been almost impenetrable through the air, but they can be exploited on the ground a little. It’s just that as we saw in last year’s game, South Florida’s one dimension wasn’t much of a dimension in this context.

There is a lot of balance on the Bearcats’ offense. Ridder has 20 TD throws and just five picks while also doing damage with his legs. RB Jerome Ford (questionable) is nearing 1000 yards and has 15 TDs. WR Alec Pierce is a reliable receiver and also a vertical threat. The offense is littered with different ball-catching threats who can surface on a given day. It seems like there’s nothing they really do great, but they average almost 40 a game.

That number could go up against a South Florida defense that has really been getting beat up lately. Houston put 54 upon the last week. They haven’t made many plays this season, and it’s hard to determine in which area they’re most-putrid, being that they’re awful across the board. Against a Cincinnati team looking to make a point after a series of underwhelming performances, this looks to be a spot where they pounce.

We see a South Florida team that is among the worst teams in the nation in the areas of aerial offense and defense, in addition to run-defense. Yet you’d be showing a profit-taking them all season. So maybe this seems too easy—the idea of a South Florida team mired in a funk where they’re putting up just a few wins per season, taking on a nationally-ranked team that has just one loss this decade.

A handful of times this season, we see one part of the South Florida team pop up with something different. The defense will sharpen up briefly, or they’ll get the run-game cranked up. A big play or two on either side of the ball manages to keep things close. Guys haven’t given up and are at least still in there trying hard. They’re at home, and so far in 2021, only Florida has really beaten them conclusively at home. Otherwise, they’ve been fairly respectable.

This is a tricky spot. Deferring to the better team against a somewhat-dysfunctional Bulls squad isn’t that bad of a move, perhaps, but I sense a Cincy bunch that maybe isn’t getting better as the season ages into its late stages. After all, even with a slew of miscues and turnovers last season, the Bulls still stayed within three TDs, and that was in Cincinnati. With fewer miscues from QB Timmy Mcclain, the Bulls might be able to keep this one from getting too out of hand. I’ll take a whirl on South Florida at home in this one.

Loot’s Pick to Cover the Point Spread: I’m betting on the South Florida Bulls plus 23.5 points. Question: Are you a college kid or a small bettor with a limited budget? We have a killer 200% bonus for ya! How it works: Open a betting account at Intertops Sportsbook through this special link. Deposit $25 (or more). Go to their “Special Offers” page and enter bonus code ROOKIE200. An extra $50 will show up INSTANTLY in your account balance! A sweet bonus from the oldest sportsbook on the web!