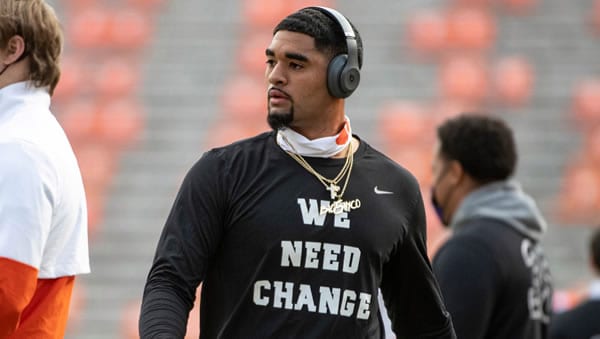 The Clemson Tigers travel to South Bend to take on Notre Dame in a primetime battle of two of the country’s top four teams. Clemson holds a 3-1 all-time edge against Notre Dame, including most recently a 24-22 victory in 2015 and a 30-3 dominating win in the 2018 BCS Semifinals.

With Clemson quarterback Trevor Lawrence already announced out for this week, the Tigers will again turn to DJ Uiagalelei. Lawrence is expected to be the top pick in next year’s draft and is undoubtedly an enormous loss, but if picking any freshman quarterback in the country to start in his place, Uiagalelei would likely be your choice. He was the top high school recruit of his class and has not only a cannon for an arm but also the ability to make plays on the ground, as evident by his three rushing touchdowns to along with two touchdown passes so far this season. He has completed over 70% of his passes this season. He will look to continue that success both through the air and with his legs on Saturday, similar to that already found by dual-threat quarterbacks Jordan Travis of Florida State and Malik Cunningham of Louisville against the Irish defense this season.

BEST OF THE BACKS

The “hidden” star of the Clemson team is running back Travis Etienne, who last week became the all-time rushing leader in ACC history. The senior back led the NCAA in touchdowns with 26 in 2018 and last year became the first player in 42 years to win back-to-back ACC player of the year awards. This season Etienne has rushed for over 600 yards with nine rushing touchdowns along with 29 receptions for 434 yards and two additional scores through the air. Some expected Etienne to go pro after last season, but now that he has built even more already around a dominant resume, it would be of no surprise if, much like his teammate Trevor Lawrence, he was the first at his position to be selected in the 2021 NFL Draft.

Clemson has had a good streak of receiver success over the last few years, with at least one going in each year of the NFL Draft since 2013, starting with Deandre Hopkins and including Sammy Watkins, Martavis Bryant, Mike Williams, Hunter Renfrow, and Tee Higgins. This season senior Amari Rodgers is the clear best of the bunch, leading the team with 40 receptions for 586 yards and six touchdowns. After Rodgers, Etienne is second on the team in catches while receiver Cornell Powell is third, and the latter is coming off the best game of his college career with 11 receptions for 105 yards against Boston College.

The Clemson offense faces an apparent tough test this week against a Notre Dame defense that ranks 6th in total yards and 4th in scoring. When you look at who the Irish have played thus far, though, it suddenly doesn’t feel as impressive considering, not of their previous six opponents are currently even .500, and they have a combined record of 12-28. Pittsburgh is the only team that Notre Dame has played that has a defense that ranks in the top 50 in scoring, and that’s thanks in large part to the Panthers opening week shutout of FCS doormat Austin Peay.

Notre Dame quarterback Ian Book is coming off of his most accurate game of the season in terms of passing percentage and will hope to continue that success against a Clemson defense that will be missing one of its best players in Xavier Thomas for the first half of Saturday’s game thanks to an idiotic targeting penalty he received last week against BC. Book has put up decent enough stats against ranked opponents over his Irish career, passing throwing for 16 touchdowns compared to 5 interceptions, but he will hope to extend that success to the ground as well as of his 13 career rushing touchdowns, none of which have come against top 25 teams.

DID YOU KNOW THAT YOU COULD BE WAGERING ON GAMES AT -105 INSTEAD OF -110? IMAGINE HOW MUCH MONEY YOU WOULD SAVE OVER THE YEARS! –> BETANYSPORTS

Despite ranking just 71st in the country in passing yards per game, Book and the Notre Dame air attack are at least starting to develop more consistency as the year has progressed. At wide receiver, Javon McKinley is at the top of the list, followed by Avery Davis, and the team is hoping that Ben Skowronek can build upon his breakout game against Pittsburgh and become a steady third with Braden Lenzy still hobbled with a hamstring injury. Tommy Tremble continues to fade from relevance at tight with just one reception in each of his last four games, but that hasn’t seemed to have mattered with freshman Michael Mayer becoming the clear favorite at the position as he continues to show flashes of NFL potential on a weekly basis.

Kryen Williams continues to lead the way in the running game, averaging 100 yards per on the ground while also scoring seven touchdowns on the season. He will hopefully have learned his lesson after his fumble was returned 93 yards for a touchdown by Georgia Tech a week ago, as any errors like that against a team like Clemson will make it that much more difficult to pull the upset. Williams is backed up by C’Bo Flemister, who has scored a touchdown in eight of his last twelve regular-season games and seems to have solidified his spot as the number two back ahead of Chris Tyree as the season has progressed.

Notre Dame has won 37 games in a row when scoring more than 20 points while also winning their last 22 straight at home in South Bend. Clemson is 26-1 in road games since 2015, with their only loss coming against Syracuse in 2017 when starting quarterback Kelly Bryant was knocked out in the first half. The Tigers dominance extends to the sportsbook as well as they are also 9-3-1 against the spread in their last 13 away games. The 5.5-point line this week is the lowest amount that Clemson has been favored in a non-bowl game since week three of the 2017 season, a streak of 36 games.

I am going with Clemson this week for three reasons; they are more talented, Dabo Swinney is a significantly better coach than Brian Kelly, and the track records of the teams against top competition are at nearly opposite ends of the spectrum. Going back to 2015, the Tigers are 21-3 in their last 24 games against ranked opponents, with their only losses coming in National Championship games against Alabama (twice) and LSU. On the other hand, Notre Dame is 5-24 in their last 29 versus top 12 opponents and a laughable 1-17 in their previous 18 games against top 6 opponents. Even without Trevor Lawrence on the field, you can back Clemson with confidence to get the win and cover on Saturday night against Notre Dame and a coach in Brian Kelly who you can always count on to pull a disappearing act in big games.

Mike’s Pick to Cover the Point Spread: Clemson -5.5. Bet your Week 10 NCAA football picks FREE by taking advantage of a 100% real cash bonus on your first deposit of $100 to $300 at MyBookie Sportsbook!