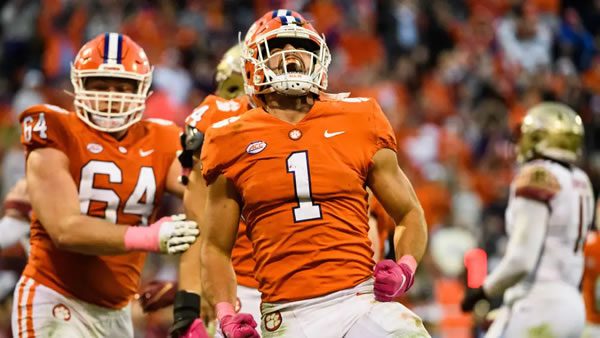 Point Spread: CLEM -3.5/ND +3.5 (Get a 100% real cash bonus up to $500 when you use bonus code PREDICTEM on the special offers page at Everygame Sportsbook! The oldest bookie on the web!)

Can there be a more dangerous opponent for Clemson now than a side that is wholly unburdened? With four games left on the slate, Notre Dame has no delusions of making the playoffs and knows that it’s good enough to get to a bowl game and ruin a few teams’ seasons along the way. The Fighting Irish seem to be coming together at the right time and just handled Syracuse with ease, which has to be a significant concern given that Clemson nearly fell apart against the Orange. The Tigers have nothing to gain from this game and everything to lose, as they aren’t playing a conference game here and won’t get any style points for beating the Irish, given Notre Dame’s three losses.

Meanwhile, the Irish can only help themselves. With Navy and Boston College still on the slate, there’s no chance that Notre Dame is going to miss out on postseason play in Marcus Freeman’s first year running the show in South Bend. This was always going to be a transition year, and the Irish now face the chance to wreck Clemson’s season while truly having nothing to lose. And with the way they’ve played and a defense that can ruin a quarterback’s confidence, this could be a difficult battle for Clemson to face.

How the Public is Betting the Clemson/Notre Dame Game

The public is riding with the defense in this one, and so is the money. The total has fallen 3.5 points from 48 to 44.5, with the spread unchanged despite 57% of tickets on Clemson.

Is DJ Uiagalelei back to being himself after a terrible showing against Syracuse? The Tigers would have gotten beat at home by the Orange had Uiagalelei not been benched in the third quarter, allowing backup Cade Klubnik to get the Tigers on track and ride Will Shipley to a comeback. That might not work against Notre Dame, as the Irish have shown that they can make life difficult for good offenses. Even Ohio State only managed to score 21 on Notre Dame, and the Irish have held five of their opponents to 21 points or fewer.
Clemson hasn’t really moved the ball all that well this season until later in games, as the Tigers often take a quarter or two to adjust to the defense and figure out what they need to do to attack it properly. It does end up working out for them, but it often ends up taking a while, which leads to better teams hanging around and putting the Tigers in a spot where they need to overcome a deficit or come up with some late-game heroics in order to get a result. The Tigers are very dependent on Shipley running the ball and on Uiagalelei to not make mistakes that make it difficult for them to overcome. As long as they avoid the early error, they should be in decent shape.

The Irish are never going to win any awards for their attack because their best quarterback is out for the season. With Tyler Buchner on the sidelines, Notre Dame has had to get creative with how and when it attacks, and usually, the best way for the Irish to do anything is to let Audric Estime do the job on the ground. Notre Dame’s numbers are almost even in passing and running, as the Irish average 186.6 rushing yards per game and 196.4 through the air.

In this game, that is an issue because the way to beat Clemson is through the air. The Tigers don’t really defend the pass all that well, but their ground defense is very difficult to deal with. Sean Tucker never got going for Syracuse against the Tigers, and the Irish know first hand just how hard it can be to stop him on the ground. Either Estime will have to do what nobody has done against Clemson’s front seven, or the Irish will have to hand the ball to Drew Pyne. Pyne isn’t likely good enough to win a game by himself, but in this game, he’s going to have to do something to get the Irish to hang around. Throwing for 116 yards as he did against Syracuse will not cut it.

More Picks: Get the money with Loot’s Oregon at Colorado recommended bet

Notre Dame keeps saying no to joining the ACC, but the Fighting Irish should probably look at their records and reconsider that one. In their past six games against ACC opponents, the Irish have covered the number every time. It’s when they play at home that they struggle; they’ve covered in just one of their past six home games. Clemson, conversely, is a road warrior that doesn’t cover much outside of league games. The Tigers have 20 covers in their past 28 games away from Memorial Stadium, and they’re 4-1 ATS in their past five November games. But that said, the Tigers are just 2-8 ATS in their past ten games outside the ACC.

The under is likely the play here. Clemson is not a great passing offense but dominates on the ground, and Notre Dame will have to do the same thing based on their own limited personnel and the conditions present. With the passing game basically cut off, Notre Dame doesn’t have much that can harm Clemson. And with that being the case, give me the Tigers. Bet your Week 10 college football predictions for FREE by scoring a 50% real cash bonus at the best bookie on the web —> Bovada Sportsbook!