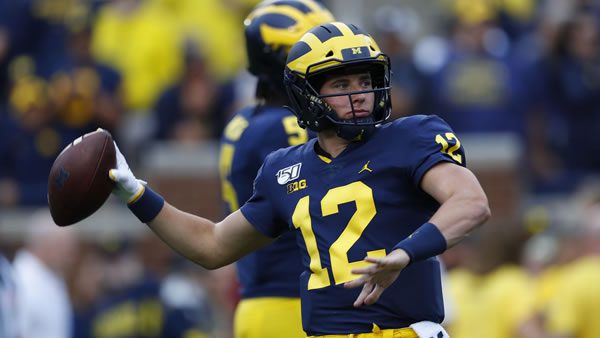 Jay Norvell was on the sidelines for Colorado State’s last game in 2021 as the opposing coach, and now he’s got the task of trying to rebuild the Rams after coming over from Nevada. Norvell brought over several of his players from Nevada via the transfer portal, which should give Colorado State a little bit of help when it gets into Mountain West play. But it’s going to be a tough ask to say that the Rams can hang with a Michigan team that’s coming off a Big Ten title and an appearance in the Orange Bowl.

Michigan really couldn’t have made its September any easier, as the Wolverines’ first four opponents are all in Ann Arbor and include Colorado State, Hawaii, Connecticut and Maryland, none of whom are considered to be even close to a contender to do much of anything this year. The question here is whether the Wolverines’ strategy of using the first two games to decide their quarterback competition will work out or backfire on them. Jim Harbaugh refused to decide on a quarterback between Cade McNamara and JJ McCarthy, instead opting to let McNamara start against Colorado State with McCarthy going against Hawaii.

That could mean that Michigan never lets its foot off the gas, as the Wolverines are using these first two games for evaluation purposes before getting into Big Ten play. If that’s how this plays out, it’s not exactly something that bodes well for Colorado State.

How the Public is Betting the Colorado State/Michigan Game

The public is all over the Wolverines and banking on McNamara to show what he’s capable of doing. The line has jumped four points from Michigan -27.5 to Michigan -31.5, and 71% of tickets are on the Wolverines.

When Colorado State Has the Ball

Clay Millen was supposed to be the quarterback of the future at Nevada, but now he’s the quarterback of the moment in Fort Collins. The Rams are likely to throw the ball a fair amount given what Norvell ran at Nevada, but that’s not really the way that this team is constructed right now. Colorado State has to replace both of its tackles and its left guard, and it’s got to replace its leading pass-catcher from a season ago in tight end Trey McBride.

What the Rams do have is David Bailey and A’Jon Vivens returning as running backs, and Norvell says that he does want to run the ball more than he did at Nevada. Whether that works out or not is up for debate, as Michigan has a severe lack of experience on defense and might be vulnerable to a few solid offensive drives. The Wolverines will of course be more talented, but if Millen can get on the same page with his receivers and the Rams can establish the run, there’s a chance for a backdoor cover here.

This is where Michigan needs to dominate, because the offense is going to be far more experienced than the defense at this point in the season. The Wolverines have nine starters back from a season ago, and they’re facing a fairly weak defense that really didn’t stop much of anybody and could be even worse this year.

Cade McNamara knows he’s got a tenuous hold on the job after not winning the job outright despite being the starter last season, which means the pressure is on for him. With his top five pass-catchers returning, there’s a lot of reason to think that Michigan will be able to throw the ball all over the field against Colorado State.

The question is, how much does Michigan want to let its offense dominate? The Wolverines really don’t have to worry about any of their opponents until Oct. 1 at Iowa, so they’ve got plenty of time to get guys experience if that’s what they want to do. If it’s more important for Jim Harbaugh to decide a winner in the quarterback position, Michigan likely drills Colorado State. If he chooses to get backups experience, Michigan could leave the backdoor open.

The Wolverines have been dynamite at home as long as they don’t have to face a Big Ten foe. Michigan is 12-0 SU and 9-3 ATS in its past 12 home openers against non-conference opponents, with the last loss coming in 2008 in the ill-fated Rich Rodriguez era. Michigan was 6-1 ATS at home a season ago, only failing to cover against Rutgers.

Colorado State has been pretty weak as of late, failing to cover in six straight and going 3-7 ATS in its past 10 road games. However, the Rams have been a good bet to have points scored: the over has cashed in four straight CSU games.

It’s going to be a rather warm day in Ann Arbor when these teams are on the field. Temperatures are supposed to hit 86 degrees at kickoff, with winds blowing at eight miles per hour toward the southwest.

With how little talent Colorado State has on its roster and how this team really isn’t built to how Norvell wants to coach, I really don’t want any part of the Rams. I’m thinking that Michigan is going to put up some big numbers with McNamara on the field, which makes the over a top play for me. I don’t like either spread option, but if pressed, I’ll take Michigan. Note: We’ve arranged a SPECIAL unadvertised 125% bonus up to $400 in FREE bets when you use bonus promo code PREDICTEM at GTBets Sportsbook! They also give you a free half point everytime you bet your favorite NFL, college football, NBA and college basketball team!