Dog of the Week: Mississippi State vs. LSU Prediction 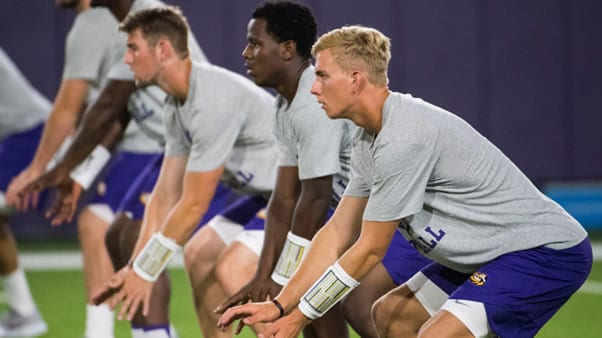 The Air Raid returns to the SEC after having moderate success two decades ago at Kentucky, and the offensive coordinator of those Wildcats is now the head man for Mississippi State. Mike Leach takes over in Starkville and gets a daunting assignment in facing the defending national champions; LSU carries a 16-game winning streak into this matchup and hasn’t lost at home to anyone but Alabama since 2017.

But does LSU really know what it’s up against here? After all, the Tigers are breaking in a new quarterback themselves after turning Joe Burrow into the No. 1 pick in the NFL draft, and Leach’s offense thrives against opponents who aren’t ready for it and have to adjust their entire game plan in order to play it properly. With Tiger Stadium down to 25 percent capacity because of COVID, LSU won’t be able to count on the boisterous crowd advantage they usually enjoy. Can they take Mississippi State out of the game early in the season opener for both teams?

How the Public is Betting the Mississippi State/LSU Game

The number is dropping fast toward Mississippi State, as LSU’s number has come down from 19 at the opening to 16.5 now. The total has increased along with that, going from 55.5 to 56.5.

Wide receiver Ja’Marr Chase, defensive lineman Nelson Jenkins III, and defensive tackle Tyler Shelvin have all opted out of the season because of COVID. Tackle Dare Rosenthal is out indefinitely because of personal reasons, while linebacker Ray Parker is suspended indefinitely. Tight end Arik Gilbert and corner Eli Ricks both had shoulder surgery in the offseason and are questionable for Saturday.

The one question around the Bulldogs was answered this week, as Leach named K.J. Costello the starter. Costello struggled with injuries at Stanford in 2019 before transferring to Mississippi State to take the reins of a Bulldogs program that had been one of the weakest passing teams in the SEC last season, appearing in just five games last year. However, they were an effective five games, as he threw for 1,038 yards and six touchdowns against three interceptions.

Besides that, the numbers don’t matter. What does matter is that this is a Mike Leach offense, which means Mississippi State will air it out early and often. That means it doesn’t really matter that Kylin Hill returns after gaining 1,350 yards on the ground because he’s not going to come close to that this year. Nor does it matter that the Bulldogs’ top wideout last year was Osirus Mitchell, who had a measly 430 yards.

In fact, Mississippi State’s top wideout this year might be the guy who was throwing passes last year. Garrett Shrader was supposed to be the quarterback of the future in Starkville, but Leach has moved him to wide receiver with Costello’s arrival and true freshman Will Rogers signing with the Bulldogs. The move is far from unprecedented for Leach: he’s previously tried the same thing with Danny Amendola, Wes Welker, and Michael Crabtree.

If the Bayou Bengals are going to keep this going, Myles Brennan has to become the man at quarterback. But this is going to be a work in progress because out of Joe Burrow’s top five weapons from last year, three are now in the NFL, and a fourth (Chase) opted out because of COVID. Terrace Marshall Jr is no slouch at wide receiver after 13 touchdowns last year, but he was supposed to be the No. 2 option this season, not the main man. Racey McMath was an afterthought last year, and tight end Jamal Pettigrew has all of two catches in his college career. Oh, and running back Clyde Edwards-Helaire is now teaming with Patrick Mahomes in Kansas City, so there’s no experience there either.

To get a hold of this game, LSU will have to get Tyrion Davis-Price on track early and show that he can carry the load on the ground. Mississippi State’s running game was solid last season, and the Bulldogs have a fairly experienced secondary, so if LSU doesn’t get started right away, this game could force the Tigers to panic.

It was tough to make money on LSU last season in Baton Rouge, as the Tigers were often giving so many points that a cover just wasn’t going to happen. That was the case in four of their final six home games last year and all but one of their SEC home games, as only a destruction of Texas A&M at home allowed the Bayou Bengals to get a conference cover at Tiger Stadium. Mississippi State has also tended to play LSU pretty tough no matter where the game is played; the Bulldogs have covered four of the past six meetings against LSU and won two of them straight up.

That’s before you throw in that Mississippi State has a new system under Mike Leach, and I don’t think LSU is going to be defending this properly. Bo Pelini did not have success against Leach when he was at Nebraska, and Leach led Texas Tech, and Pelini will use a 4-3 as the Tigers’ base defense. That’s not the way that you throw the air raid off balance, and that means that LSU will be changing up its defense in order to adjust to what Mississippi State is doing.

When that’s the situation, it’s almost always advantage Leach. The air raid’s big strength is that teams don’t see it very often, but it loses its effectiveness when a team knows how to prepare for it, which is why it eventually failed at Kentucky and why Leach was 0-7 against Washington while he was at Washington State. But LSU does not appear to be ready for what it’s up against, which could mean that points aplenty are in the forecast.

Tropical Storm Beta is set to pound Baton Rouge all week, but by kickoff, the worst of the storm should be past Louisiana, leaving 86 degree temperatures and a mild breeze.

LSU is still last year’s team in the minds of the general public, which means opportunity exists. This is precisely the kind of situation where Leach’s offense is at its best, as nobody knows what to expect from Mississippi State, and LSU has not seen this offense in a while. LSU is the more talented team, and I expect the Tigers to eventually pull out a close game, but for this matchup, I want the Bulldogs and the points, and I want to get them before the line drops under two touchdowns. Bet your Week 4 and NFL Week 3 picks FREE by taking advantage of a 100% real cash bonus up to $500 at Betnow Sportsbook!