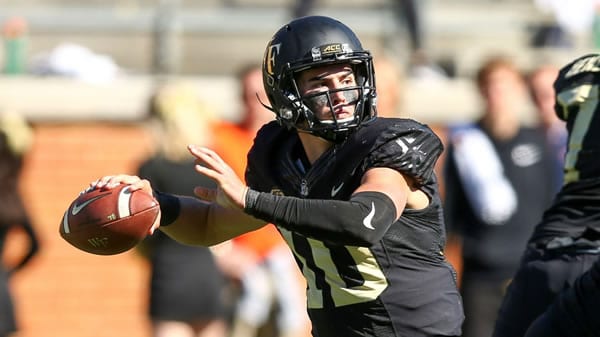 Wake Forest and Wisconsin will square off in the inaugural Duke’s Mayo Bowl this Wednesday. This bowl dates back to the 2002 season, but most will recognize it as the Belk Bowl, which was played from 2011-2019. Wisconsin will be the first Big Ten team to travel to Charlotte as this has historically been an ACC/SEC game and the third appearance for Wake Forest in this game who have won each of their previous two, most recently in 2017. The Deacons will be making their fifth straight bowl appearance with a 3-1 record in bowl games under Dave Clawson. The Badgers are competing in their 19th consecutive postseason game, going 4-1 in bowls in the Paul Chryst era. This will be the first meeting between these programs, but there is a small thread of familiarity as Wisconsin interviewed Dave Clawson to fill their coaching vacancy in 2012 when Clawson was at Bowling Green.

Wake Forest has posted a 6-2 mark against the spread in the last eight games when they are the underdog with a 5-2 ATS record in their last seven bowl games. Wisconsin is 4-1 against the spread in their last five non-conference games and 4-1 ATS in the previous five against an ACC opponent. Wisconsin is riding a four-game ATS losing streak as the favorite. The OVER is 5-2 in the seven Wake games overall and 11-5 in the last sixteen when the Deacons play a non-conference foe. The UNDER is 4-0 in Wisconsin’s last four games overall and 4-1 when the Badgers play on a neutral field. A full week ahead of the game, Wisconsin is seeing about 67% of bets on their side, with 55% of the public money coming on the UNDER.

Wake Forest has been streaky in 2020, losing the first two games of the season, then winning the next four before finishing things with consecutive losses. The Deacons allowed 46.5 points per game in losses but 16.8 points in their four wins, so this one could swing directly on how many they surrender to a Wisconsin offense that is 105th in scoring. Wake is 34th in passing offense, with Sam Hartman throwing for 1,906 yards and ten touchdowns in the regular season. The rushing attack has been sharp as well, averaging 170 yards per game, with Christian Beal-Smith leading the team with 650 rushing yards while Kenneth Walker III has 13 rushing touchdowns in just seven games. (54-795-5) leads the WR group in catches, yards, and scores and will need a big game with second-leading receiver Donavon Greene listed as questionable for the game. The Deacs are outside the top-100 in total yards allowed and passing defense but may catch a break as Wisconsin is averaging just 187 passing yards per game. Wake will need a better effort against the run as their 92nd ranked rush defense will be tested early and often. Carlos “Boogie” Basham led the defense with five sacks in six games, but recently he declared for the NFL Draft.

Wisconsin was only able to play in five regular-season games after Covid prompted several program interruptions, and they were only able to see their sixth game as part of the Big Ten’s Champions week. There are still several players on the injury report with undisclosed issues. On the field, injuries are adding up as well, with QB Graham Mertz listed as questionable after taking a big hit against Minnesota last week. Chase Wolf stepped in at QB and completed 4-of-5 passes and had a touchdown but also threw one interception. Wolf may be pressed in duty for the bowl game and would likely be without Danny Davis, and Kendric Pryor as both wide receivers have missed the last two contests and remain questionable. Tight end Jake Ferguson is an NFL-caliber target over the middle, and Jack Dunn has emerged as an effective possession receiver, but both average less than ten yards per catch, and the big play remains absent in the Badger pass game. Wisconsin should see leading rusher Jalen Berger return to the lineup after missing the last two games. Berger appears to be the next great back in Madison and has averaged 5.9 yards per carry while racking up 267 yards in just over two games. The Wisconsin defense is the best unit on the field next Wednesday as they rank #1 in the NCAA in total yards allowed. UW is 7th against the pass, 6th against the run, and are allowing 15.7 points per game. This is very much a team defense with no player having more than three sacks or one interception, but linebackers Leo Chenal and Jack Sanborn lead the way with 55 combined tackles and two forced fumbles.

It has certainly been a down year for Wisconsin after three New Year’s Six appearances in the last four seasons, but two of their three losses came in close contests with Indiana and Northwestern, who both pushed Ohio State. Wisconsin is far from perfect ahead of this game, but they are probably a bit better than their record shows. The Badgers will be smart to attack Wake’s leaky run defense and could potentially find themselves in a situation where they do not need to throw the ball much at all to control this game. The Deacs are healthier on offense but have played just one game since late November and will be facing the best overall defense that they have all season. Wisconsin wasn’t sure they were going to see the field again after losing to Iowa, so while teams like Minnesota and Nebraska have shut things down for the year, count Wisconsin as motivated to play, even if the game is a bit less high-profile than what they are used to. Jalen Berger’s return is a huge boost for this Badger offense, and I would expect Paul Chryst to have the right kind of passing packages in place to attack a soft Wake secondary. Look for a close game to the half, but Wisconsin finds some traction as things wear on, and they control the time of possession and field position battle en route to a 27-17 win.

Ted Walker’s Pick to Cover the Spread: Wisconsin. Bet your bowl games FREE by taking advantage of a 100% REAL CASH bonus on your first deposit of $100 to $300 at MyBookie! (Must use bonus code PREDICT100)