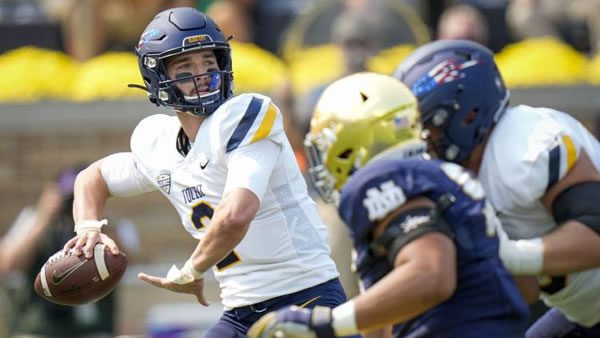 If Eastern Michigan could put back-to-back games together, it might be a real threat to win the MAC West. As it is, the Eagles are likely stuck worrying about making a second-tier bowl, as they’re two games and a tiebreaker behind first-place Northern Illinois and heading to a stadium where they haven’t won since 1999. There have been blowouts, close losses and losses that should have been wins, but Toledo has straight-up dominated this series with Eastern Michigan, winning 10 straight at the Glass Bowl and 19 of the past 21 meetings.

The Rockets looked very good in handling a Western Michigan squad that had been favored to claim the West Division last week and are on track to end their season in a decent bowl game. Eastern Michigan is the only team above .500 that the Rockets will face for the rest of the season, so if they can get on a run, they can earn an eight-win season and end a two-year absence from the postseason. If the Rockets can get on a run, it’ll be on the strength of their defense: a unit that has cashed six straight unders.

How the Public is Betting the Eastern Michigan/Toledo Game

The public is almost evenly split, with 52 percent of tickets coming in on Eastern Michigan. The spread has not changed, but the total has bumped up a point from 52.5 to 53.5.

Balance is the key for Eastern Michigan, as the Eagles are at their best when they’re not putting too much of the game on Ben Bryant. In the Eagles’ past three victories, Bryant kept his throwing attempts to under 35, while their two losses saw Bryant take to the sky at least 40 times. Bryant topped 300 yards both times that he threw at least 40 times, but with the lack of a run game, the increased yardage didn’t really help matters any.

The big problem for the Eagles is that they can’t really commit to any running back, as neither Jawon Hamilton nor Darius Boone has given a consistent boost in the ground game. Boone has gotten a few more carries than Hamilton (despite Hamilton being the more effective runner), but he’s only getting about 10 carries a game. Eastern does have two solid wideouts in Hassan Beydoun and Dylan Drummond, but teams are figuring out that they can neutralize the passing attack by forcing the Eagles to try to run the ball with a mostly punchless ground game. Until Eastern gives a back the carries they need, the Eagles are going to have a hard time getting the job done.

Here’s a big difference between Eastern Michigan and Toledo: the amount of work they give their running backs. While Eastern has two backs who have a combined 140 carries in 2021, Toledo has Bryant Koback, who has 120 carries on the season and is averaging 5.3 yards per carry. Koback has been more of the traditional workhorse back, and he’s been remarkably consistent with his output as of late, piling up 82 yards or more in all but two games in 2021.

However, the Toledo pass attack leaves a little to be desired. Carter Bradley is more of a game manager who won’t take unnecessary risks, as he’s thrown for only one interception on the year. He’s also only tossed four touchdown passes and never more than one in a game. Dequan Finn is more of the quarterback who brings excitement to the field, as he makes plenty of plays with his legs as well as his arm. Finn is the second-leading rusher the Rockets have and got the job done with his arm against Western Michigan, as Bradley didn’t play in that contest.

This matchup has been as close to automatic as it gets over the past two decades. Toledo has covered eight of the past nine at the Glass Bowl, and the series has been so one-sided that Eastern hasn’t been favored against the Rockets since 2002. In that time, Toledo has covered 14 times.

The issue with Toledo is that it hasn’t exactly gotten the job done late in the season. The Rockets have just two covers in their past eight November games, and they’re 5-16 ATS when coming off a bye week. Plus, Eastern has actually been competent on the road when it’s not playing in Toledo, covering in 24 of its past 33 games away from the factory. The over has hit in 10 of Eastern’s past 13 road games, but Toledo is riding a six-game under streak.

This will be a chilly night in northwestern Ohio, as temperatures will drop into the 30s before the night is over. Winds will blow at 9 miles per hour to the west.

Eastern has been beaten over and over in the Glass Bowl, and I don’t think there’s much of a chance that things get better here, given how Toledo relies on its ground game and Eastern has shown no signs of being able to stop the run. If Finn is on the field and making plays, the Eagles don’t have much of a path to a win.

Give me Toledo here. Bet your Week 10 college football picks for FREE by taking advantage of a 100% REAL CASH bonus on your first deposit of $100 to $1000 at Betnow Sportsbook!