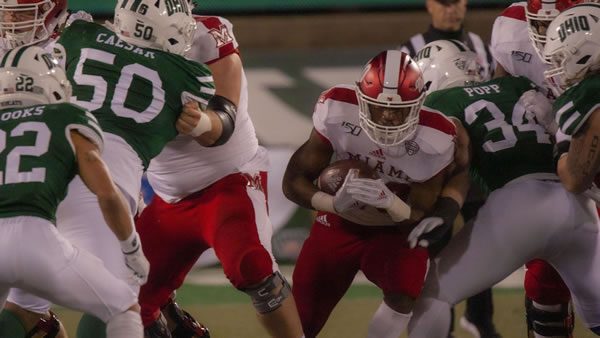 The MAC East is now wide open, and Miami has a very realistic chance to play for the league title in the final weekend of the season if it can take care of business on Tuesday night MACtion. The RedHawks will play two of the next three weeks at home, and if they can win those two and this game, they’ll go into the season finale at Kent State needing only a win to reach Detroit for the league title game. Even if Miami falls short, as long as the RedHawks can get two of four, they’ll have a shot at a bowl bid.

Ohio is merely playing out the string, as the Bobcats have just one win on the season and are the only team in the MAC that has no chance at postseason play. Ohio used to dominate this series, winning 11 of 12 games between 2006 and 2017, but the RedHawks broke through in 2018 and have won two straight in this series between southern Ohio squads. Ohio has appeared to be in a fog all year ever since Frank Solich abruptly retired before the season for health reasons, and Tim Albin hasn’t shown himself to be up for the job. But the Bobcats have covered in three of four league games this season, and they’ve played Miami close the past two seasons, which could lead to a tighter game than expected.

How the Public is Betting the Miami-Ohio/Ohio Game

The public is siding with the home team in this one. Sixty percent of all tickets have come in on Ohio, even though the Bobcats have nothing to play for other than pride. The total and spread haven’t changed since going on the board.

The ground game never got started last week against Ball State, but the RedHawks should be able to move the ball on the ground pretty well this time around. The Cardinals actually have a pretty good run defense, as they held run-heavy Army to 16 points. Ohio isn’t anywhere near as strong against the run as Ball State was, ranking 125th in rushing yards allowed.

That should allow Keyon Mozee and Tyre Shelton plenty of holes to run through and keep the offense moving throughout the game. The Bobcats have shown no signs of being able to stop the run, but if the ground game does run into problems, Brett Gabbert was very accurate last week and had no problems hooking up with Jack Sorenson for consistent gains against the Cardinals’ secondary. Ohio does defend the pass pretty well, so this is definitely Plan B for the RedHawks, but it’s a pretty good backup option if they have to consider it.

The Bobcats should be better than this, as they should have been able to ride De’Montre Tuggle to success in his senior season. But Tuggle just hasn’t been that great of a player as a senior compared to what he was two years ago, as the Bobcats haven’t created enough holes for him to run through and have had to take to the air more often than they have in the past as they’ve fallen behind. When he’s able to run as planned, he’s been effective, but too often, they’ve had to throw their way out of the hole they’ve dug.

Kurtis Rourke has shown potential as a quarterback, but he’s been too inconsistent for the Bobcats’ offense to be very effective. He did get the job done against Kent State to an extent, tossing for 308 yards, but he threw for no touchdowns in a 34-27 defeat. If Ohio is going to get anything done here, it’s going to have to get more from the passing game.

When these teams have faced off in the past, it’s tended to be a lower-scoring game. The under has cashed in five of the past six matchups between the teams, and the teams have played under 50 points in eight of the past 11 meetings. Their last meeting (COVID cancelled last year’s game) was no exception, as Miami eked out a 24-21 win.

Temperatures will fall rapidly on Tuesday, leading to a chilly evening in eastern Ohio. Temperatures might fall into the low 30s during this game, with winds blowing at five miles per hour to the northwest.

Miami shouldn’t have too much of a problem here. The RedHawks need to have this game, and the Bobcats don’t have anything left to play for now that a bowl isn’t possible. Ohio doesn’t have the run defense needed to stop Miami, which means the RedHawks should pound the rock early and often here.

I’ll take Miami to cover. Question: Have you seen our special “College Kid Bonus?” This killer deal allows you to deposit only $25 and turn it into $75 at the web’s oldest and most trusted sportsbook! Simply register for an account at Intertops through this special link, deposit $25, go to their Special Offers page, enter bonus code ROOKIE200 and the extra fifty bucks will show up in your account INSTANTLY!