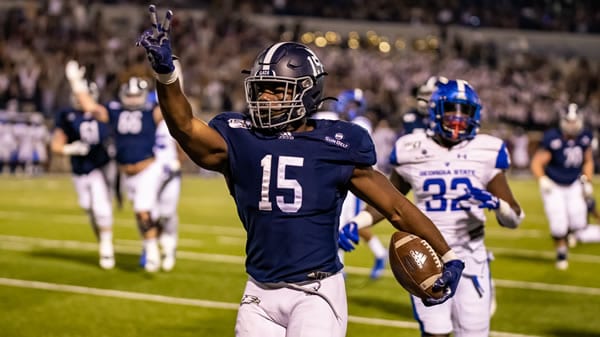 As of Tuesday, this game was still on, although that might change at any point. Florida Atlantic has had a run of COVID and had to cancel practice on Tuesday, which could drastically alter the outlook for a team that’s already been hit hard by transition. Georgia Southern was walloped by COVID last week and barely scratched out a win over Campbell, but don’t read too much into that game. The Eagles were down 33 regulars and should get almost all of those players back from the game with the Camels, as most of the absent players missed the game because of contact tracing, not because of a positive test.

Under normal circumstances, this would be an intriguing matchup between two decent mid-major programs, as Florida Atlantic comes off a C-USA championship, and Georgia Southern has qualified for a bowl in each of the past two years. But these aren’t normal circumstances, and instead, we have a game between two teams who don’t really know what they’re going to look like when — or if — they take the field on Saturday.

How the Public is Betting the Florida Atlantic/Georgia Southern Game

The line has moved three points in Georgia Southern’s favor, dropping from FAU -5.5 to FAU -2.5. The point total has fallen with it, dropping from 50 to 47.5.

Florida Atlantic:
Cornerback La’Darius Henry, safety Quran Hafiz, and wide receiver Cordell Littlejohn have opted out of the season. Wide receiver John Mitchell is out for the year with a knee injury.


Georgia Southern has 33 players questionable after a potential outbreak of coronavirus.

When Florida Atlantic Has the Ball

This was supposed to be a continuation of a strong year, but Florida Atlantic had to move on from its quarterback when Chris Robison was dismissed from the program in the offseason, removing one of the top signal-callers in Conference USA from the roster. Without Robison available, Florida Atlantic now turns to Nick Tronti, a former transfer who’s a year removed from his last real action at quarterback. Tronti only threw for 180 yards all of last year, making this a major question mark for the Owls.

With the passing attack a significant source of concern, Malcolm Davidson needs to be at his best for the running game to set up the pass. Davidson averaged more than seven yards per carry last season, and the experience from that season will be critical for a team that’s missing a lot of experience from a championship team.

When Georgia Southern Has the Ball

When it comes to Georgia Southern’s offense, the system is a lot more important than the people who are actually going to be executing it. That’s why the Eagles were still able to survive Campbell in their first game: the team knows how to run the triple option so well that it could handle losing several pieces and still find a way to survive on the field.

J.D. King filled in admirably at running back, but he’s just one part of the equation when things are going the way they should. Along with Wesley Kennedy and quarterback Shai Werts, expect Georgia Southern to grind out some clock and build a comfortable lead, much like Army football has done this season. Georgia Southern runs a similar style that’s very hard to play against, and with a new defense starting this season, Florida Atlantic might not have everyone on the same page on the defensive side of the ball. Against the triple option, it’s a major risk because of how much that offense requires everyone to know what’s happening in order to prevent getting blocked out of the play.

Georgia Southern failed to cover against Campbell, but considering that nobody outside the program, including Vegas, knew that the Eagles would be down 33 players for the contest, throw that one out of the numbers. What’s left is the fact that Georgia Southern covered in each of its past three home games, while Florida Atlantic covered four straight away from home, meaning that something has to give here.

The most likely thing to give is the total. Georgia Southern’s numbers are going to be higher than you think, especially against a team that doesn’t have a lot of experience at this level. The Eagles should be able to grind out yards against a defense in transition, which means that points are likely to follow. Georgia Southern has gone over the total in seven straight games as the underdog, and the FAU defense has been rather lackluster away from Boca Raton, with the over hitting in six of FAU’s past eight contests. Based on the history, this might be the best angle to take for this one.

If the small possibility of thunderstorms stays away, this should be a great afternoon for football, with temperatures hitting 69 degrees at kickoff on a cloudy day.

Georgia Southern believes in its system above all else, and the Eagles have the ability to get results with reserve players. That gives them a significant edge against Florida Atlantic, which is still very much transitioning into a Sun Belt contender after getting hit hard by graduation and off-field issues. Plus, the Owls have a new coaching staff under Willie Taggart, and in this crazy season, that’s not where you want to be.

If this game is played, Georgia Southern will have survived the worst of the pandemic, while Florida Atlantic might be facing the loss of some players. Even if the Owls are full strength, I’m going with experience here. That means I’m taking the home dog and Georgia Southern plus the points.