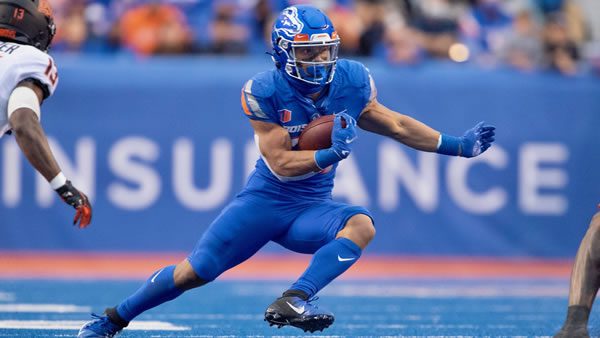 The Fresno State Bulldogs come to Albertson’s Stadium on Saturday to take on the Boise State Broncos in the Mountain West Conference Championship Game. Both teams took care of business to get here, with Boise beating Utah State, 42-23, and Fresno shutting out Wyoming, 30-0, on Saturday. For Boise, it was another feather in their cap in the MWC, with the Broncos getting here on the strength of their 8-0 conference mark. They get this one at home but catch a Fresno team this week that has really caught fire. Who can bring us home the cover on Saturday?

The Momentum of Fresno State

On one hand, Boise has not lost in conference play, and that includes a 40-20 win over the Bulldogs at home on October 8. Boise really ran it well in that game, with the Fresno “D” duck soup against the ground game all day long. Fresno was without starting QB Jake Haener, which will help explain their relatively poor offensive showing on that day. It might not be the best game to use upon which to base a judgment for this contest. But you could say that Fresno again faces the prospect of stopping a strong ground attack this week on a field where the conditions will be more severe than they were the last time these teams played at this stadium.

Since that loss, however, the Bulldogs have peeled off seven straight wins. Haener has found a top gear, relying on the running of Jordan Mims, who is over 1000 yards and 15 TDs. He has talented receivers he can employ, like Jalen Moreno-Cropper. Neither had a good game against Boise a few months ago, but things were a lot different without Haener in there. And while they can still be exploited defensively, especially on the ground, they’ve shown better form from the “D” that allowed 316 ground yards to the Broncos in the first game they played.

Optimism for Boise This Week

We see this season once again that while we might be outside the Boise glory period, where they were even making a national splash on occasion, the Broncos are still a team that can overwhelm this conference. They already beat this team. The things they used to do to beat the Bulldogs will likely surface again. They’re even in better hands now at QB, with Taylen Green having grown in experience and form. Running backs George Holani and Ashton Jeanty, both of whom ran wild on this Fresno defense before, are healthy and doing well, and ready to perform in this title game.

Theoretically, Boise being a team that relies more on the run, should help them against their more aerially-inclined opponents this week amidst these conditions in Boise. Being at home helps. Having already beaten this team by 20 means something. It’s Fresno who needs to buck reality this week. Boise just has to be Boise. And the things they do have a way of showing up every week—running the ball and playing defense. It’s not a magic formula.

Make no mistake, having Haener in there this week and their 7-game winning streak goes a long way. They’re still going to need to beat a team that beat them already in conditions that don’t favor them. They’re happy to have Haener back but are still going against the top pass defense in the conference, a group not prone to giving up gobs of aerial production. So, I’m not sure the presence of Haener just automatically gives this game a different look. The aerial game was nonexistent last time, which likely hurt their run game. Even so, it’s not exactly promising that Mims was stood up so often in that contest, as they will need their run-game to deliver this week to open up the rest of the offense.

Fresno has shown they can hang in there with the best of the rest of the Mountain West. And there are some good teams in that mix. Going on the road to take on a Boise team that is unbeaten in conference is a different kettle of fish altogether. That defense is a lot different than what they’ve been seeing this season, as they already found out. The presence of Haener offers promise but is not a cure-all. Boise is solid defensively in all areas. Fresno might struggle to find an “in” to establish a groove on offense. Contrarily, what besides wishful thinking makes it seem like Fresno can stop the Boise run? Or that a more acclimated Green can’t do more damage aerially than he did two months ago?

Even the most stalwart Boise backer should be wary of Fresno’s enhanced state coming into this game with a big head of steam and a more-intact team. I think the home-field component looms large in favor of a home team that doesn’t have to cover a big spread this week. Boise is far from invulnerable, having shown enough dicey moments this season to make it far from a pipe dream that a streaking team like Fresno can pull this off. I just see the Boise run game having the final say as the Broncos come through with the win and cover at home.

Loot’s Pick to Cover the Point Spread: I’m betting on the Boise State Broncos minus 3 points. Bet your Week 13 NFL football picks for FREE by scoring a 100% real cash bonus up to $300 when you use bonus code PREDICT100 at MyBookie Sportsbook!