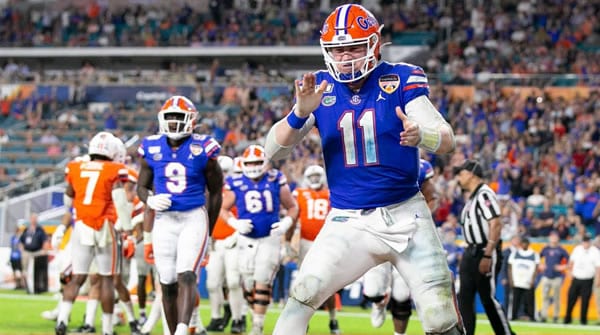 Florida believes this is the season where it returns to the top of the mantle in the SEC East, and the Gators got off to a solid start in their opener at Mississippi. The Gators seem to be trying to prove that you don’t need a bell-cow running back to win in this day and age, as they opted for a three-headed monster on the ground to back up quarterback Kyle Trask. So far, it’s working well for Florida, as they put up 51 points in the opener.

South Carolina certainly hopes you can win without a strong ground game, as the Gamecocks’ rushing attack was a liability in the loss to Tennessee. The Gamecocks had no problem attacking the Volunteers through the air, but their ground game was a disaster, gaining just 89 yards on 35 carries. If the Gamecocks can’t keep the ball and keep Florida’s potent passing game off the field, it’s going to be difficult for South Carolina to find a result against a team that’s topped 35 points in four of its past five games and has hit their defense for 38 and 35 points in their past two meetings.

How the Public is Betting the South Carolina/Florida Game

Defensive linemen Lucas Alonzo, Dante Lang, and Lamar Goods missed the win over Mississippi and are questionable for this game, while defensive lineman Kyree Campbell is probable after missing the Mississippi game. Defensive back Ethan Pouncey is out after hip surgery, while Brad Stewart Jr. was suspended against Mississippi and is probable. Offensive lineman Ethan White is out with an undisclosed injury, while defensive back Fenley Graham and linebacker Jeremiah Moon are questionable with undisclosed issues.

When South Carolina Has the Ball

The good news for the Gamecocks is that they were able to keep the ball for 35 minutes against Tennessee, which helped keep them in the game. The bad news was that even though they could keep the ball for over half the game, their running attack was virtually nonexistent against the Volunteers. That could be a death sentence against the Gators, which features a stout run defense and a highly touted secondary.

However, the secondary didn’t show up against Mississippi, which gives the Gamecocks some reason to hope. Florida allowed the Rebels to throw for 443 yards last week, which opens up a range of possibilities for Collin Hill to attack the Florida secondary. In order to do that, he’s going to have to connect with Shi Smith early and often. Smith hauled in 10 passes against Tennessee for 140 yards, and the Gamecocks have enough weapons to keep Florida from focusing too much attention on him for most of the game. The key for South Carolina is going to be to keep Hill from getting overwhelmed by pressure, as the line didn’t do a great job against Tennessee and faces an even more formidable challenge this week.

Florida still doesn’t have a top running back, but it doesn’t really need one when it’s got Kyle Trask slinging the ball around. Six touchdown passes showed that Trask has picked up right where he left off, and much like Hill did, Trask had no problem slinging the ball around, finding 11 different receivers in the win over Mississippi. Tight end Kyle Pitts proved to be his favorite target, catching eight passes for 170 yards, which says that either the Gators are excellent at finding a way to get him involved or that the Rebels have a rather sorry defense.

The key for Florida will be building on the performance and taking advantage of its opportunities. The defense didn’t exactly inspire confidence last week, but it didn’t really matter with the Florida offense, essentially doing anything it wanted from start to finish. However, South Carolina has the passing attack to keep pace with the Gators, which means that Florida needs to keep its stable of backs pounding out yardage on the ground. South Carolina didn’t exactly do much when it came to stopping the run, and Florida averaged 6.8 yards per carry against Mississippi, with four runners getting more than six yards a carry. If the stable of backs can keep South Carolina off-balance, Trask will be able to throw as often as he wants.

Leaving Columbia has tended to be a disaster for South Carolina as of late, as the Gamecocks have failed to cover in five of their past six road games. South Carolina has also really struggled in October as of late, as the Gamecocks are just 1-4 ATS in the year’s 10th month. A large part of that has to do with October traditionally being the time of the year when conference matchups get underway, as South Carolina has found itself buried by the likes of Florida, Alabama, and other powerhouses in the SEC.

Against Florida, they’ve had some success in their recent trips, but that’s partially because the oddsmakers tend to set the lines pretty high toward the home team. Over the past seven matchups, the road team has gone 5-1-1 ATS, and two of the past three meetings in Gainesville have been decided by four points or less.

The past two matchups have been a departure from the defensive battle that this contest used to see. Prior to 2018, six of the previous seven meetings had seen 50 or fewer points between the teams. But in the past two years, both teams have made themselves offensive powers, and the total has soared into the 60s in both of the past two matchups.

This should be a warm, overcast day in north-central Florida, with temperatures pushing into the low 80s at kickoff.

Florida looks like the best team in the SEC East right now, and South Carolina’s poor rushing attack does not bode well with keeping the ball out of Trask’s hands. I expect this game to feature a lot of points, and I think Florida will get the majority of the possessions that turn into points. I just can’t see a defense that Tennessee shredded having much luck at all in trying to stop Florida.

I think the Gators can handle this spread, and I’d like the over to hit for the third consecutive season.

Take the OVER! Note: Did you know that there’s still places to bet your college football picks (NFL too!) at -105 odds? Yes! —> BetAnySports!