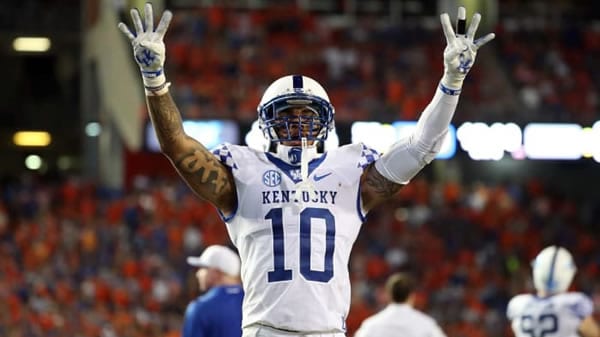 This year’s Gator Bowl offers up an interesting ACC-SEC match-up, as Kentucky meets North Carolina State Saturday afternoon in Jacksonville. The Wolfpack ended their regular season with four straight wins while the Wildcats finished under .500. And yet Kentucky is favored on the Gator Bowl betting line. Who do we like for our free college football bowl betting pick?

Gator Bowl betting odds opened Kentucky at -3 over NC State, with an over/under of right around 51.5. Early betting action then dipped the Wildcats to -2.5.

According to Sagarin’s ratings at USAToday.com Kentucky should be favored by four points for this game.

North Carolina State hoped to bounce back this season, after going 4-8 and missing a bowl last season, and did just that. The Wolfpack started 4-1 but back-to-back losses to two decent outfits in North Carolina and Miami knocked them from contention for a spot in the ACC championship game. But State picked itself up and won its last four games, finishing with a 23-13 victory over Georgia Tech back on Dec. 5.

So the Wolfpack finished 8-3 playing what Sagarin ranks as the 67th-toughest schedule in college football this season – one that didn’t include the two teams that played in that ACC title tilt, Clemson and Notre Dame.

North Carolina State played 4-2 both SU and ATS this season against teams that finished at .500 or better. The Wolfpack pulled point-spread upsets of Wake Forest, Pitt and Virginia, should have beaten Miami and handed Liberty its only loss of the season.

Also, while the NC State defense struggled through most of the season it held its last four opponents to just under 20 points per game.

Kentucky, meanwhile, figured to finish in the middle of the pack in the SEC East this season, and that’s exactly what they did. The Wildcats opened 0-2, with an excruciating overtime loss to Ole Miss, then got to 2-2 by holding Mississippi State and Tennessee to a combined nine points. But the schedule got really tough from there and the ‘Cats lost four of their next five games to teams like Georgia, Alabama and Florida. Kentucky then finished with a 41-18 victory over South Carolina back on Dec. 5.

So the Wildcats played 4-6 against what Sagarin ranks as the No. 8 toughest schedule in college football.

Kentucky out-gained the Gamecocks in that season finale 492-404 but gave up 297 yards on the ground. So the Wildcats out-gained five of their 10 opponents this season and out-rushed six of those 10 foes.

Kentucky also played 0-5 SU, 1-3-1 ATS vs. teams that finished at .500 or better this season. The ‘Cats gave Georgia a good game and covered as 17-point dogs, got blown out by the Crimson Tide and pushed the spread as 24-point dogs against the Gators.

The Wildcats got held to 13 points or less five times this season but they also held five opponents to 20 points or less. That’s why they played six unders out of 10 games.

Sagarin ranks the SEC East, home of the Wildcats, as the No. 6 toughest conference in the country this season, with the ACC Atlantic, home of the Wolfpack, coming in at No. 9.

Overs are 7-4 in Wolfpack games this season, which are averaging 61 total points.

Unders are 6-4 in Wildcats games this season, which are averaging 48 points.

At first glance the line on this Gator Bowl seems a little off, considering the team with the much better record is the underdog. But these teams are closer than records might indicate, and Kentucky played the much tougher schedule. Also, the Wildcats own the better running game and the better defense. We like Kentucky here, giving the short spread. Before you go, check out this awesome bonus! “Deposit $25 and get a FREE $50 bet at Intertops!” You must sign up through this special link AND use bonus code ROOKIE200 right after you sign-up and deposit!