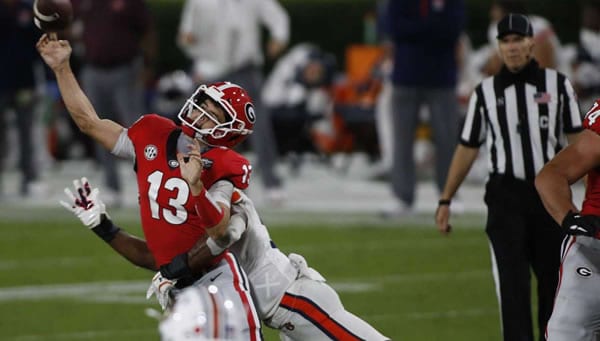 UPDATE: Nick Saban has contracted Covid. The line has moved down to 4.

This is the big one in the SEC, as Georgia tries to finally get over the hump that has stood in its way ever since Kirby Smart left Alabama to take over Georgia’s program. The Bulldogs have made it to three consecutive SEC championship games and even won one of them, but they’ve yet to get past Alabama. In 2017, Alabama got beat by Auburn and somehow found their way into the playoff, beating Georgia in overtime and costing the Dawgs the national title. In 2018, Georgia controlled most of the game before Jalen Hurts came off the bench and rescued the Tide to win the SEC title game.

Now, these teams meet in Tuscaloosa, and SEC West stadiums haven’t exactly been a friendly place for Smart as a head coach. So far, Smart is just 1-3 in SEC West stadiums, having lost at Arkansas, Auburn, and LSU before finally breaking through to beat Auburn on the road last season. Plus, Nick Saban has never lost to a former assistant, boasting a 21-0 record against coaches who worked under him. But Alabama’s defense doesn’t look anything like itself from past seasons, and Georgia seems to be getting its offense figured out. Can the Dawgs finally break through against the Tide?

The line has bounced back and forth between 6.5 and 7.5 for Alabama, so when you get, it will be key. The total has dropped two points from its opening of 59.

Georgia:
Wide receiver Dominick Blaylock is out for the season with a knee injury, while quarterback Jamie Newman opted out because of COVID. Offensive lineman Owen Condon is doubtful with an undisclosed injury, while wide receiver Tommy Bush is out with a concussion. Quarterback J.T. Daniels (knee), linebacker Walter Grant (undisclosed), and wide receiver Matt Landers (upper body) are questionable, while running back James Cook (shoulder) and linebacker Jermaine Johnson (undisclosed) are probable.

Alabama:
Alabama reports no injuries. Update: Nick Saban has come down with covid.

After a half of football, Georgia’s offense looked like it might be a complete disaster without Jake Fromm, and the Bulldogs appeared to have no apparent solution. Enter Stetson Bennett, a former walk-on who joined Georgia out of high school, transferred when it became evident that the Bulldogs saw Fromm and Justin Fields as their future at quarterback and then returned when Fields transferred to Ohio State. When Fromm left for the NFL, and two transfers either got injured (Daniels) or opted out (Newman), Bennett got the job by virtue of being the last man standing, and he hasn’t let it go.

It took some time for him to get started against Tennessee, and he’s going to have to be better against Alabama because the Tide’s pass defense has been its biggest weakness. Last week against Mississippi, Alabama could not stop anything the Rebels tried to do and ended up surrendering 379 yards through the air. If Bennett can get into a rhythm, Georgia can take control early and play the way it wants to, rather than having to play catch-up with the Tide’s potent attack.

This is a case of strength on strength, as Alabama’s offense has looked simply unstoppable to this point of the season. Against Mississippi, the Tide was able to keep pace because Najee Harris ran all over the Rebels, gaining 206 yards and scoring five touchdowns on the ground. Mac Jones was even better at quarterback, tossing just four incompletions on his way to a 417-yard day. But that said, the Tide has yet to see a defense that’s even close to the level of Georgia, which has allowed just 12.3 points a game and has given up only 1.5 yards per carry.

That puts a lot of pressure on Harris to continue the play he showed at Oxford. Obviously, Harris isn’t going to be as successful against the Bulldogs, but he doesn’t have to be. All he has to do is post a solid day that keeps drives going and keeps Georgia from focusing all of its efforts on Mac Jones. But that’s easier said than done against this defense, as not only is Georgia incredibly talented on that side of the ball, but Smart still has intricate knowledge of the Tide’s offense, as he was the Alabama defensive coordinator before he made the move to Athens. There’s a reason that it’s taken a complete change in Saban’s game plan for Alabama to win in each of the two meetings he’s had against Smart.

Is Georgia a live dog or not? That tends to depend on where the game is played. In their past six games as an underdog, Georgia has been an excellent cover team, winning five of those against the number. But when Georgia’s left Athens as an underdog, things haven’t really gone that well for them. Georgia is just 2-7 ATS in its past nine as a road dog, most likely because Georgia just isn’t an underdog all that often unless the opponent is really good. However, because these teams are so talented, backing the underdog has been a winning strategy: the dog has covered six straight matchups.

Alabama used to be as reliable as it got for bettors, but the Tide haven’t really been much of a cover team as of late. Alabama has already failed to cover twice this year, and they’re 1-6 ATS in their past seven games against a team with a winning road record. Still, they’re tough to challenge in Tuscaloosa, as they’ve covered four of five at home, including against the Texas A&M team that just beat Florida.

When it comes to the number, Georgia and the under make a reliable pair, as the Bulldogs have seen nine of their last ten conference games go under the number. But against Alabama, the Tide’s powerful offense has flipped the script: the over is 6-1-1 in the past eight matchups.

With temperatures of 73 degrees and partly cloudy conditions in Tuscaloosa, weather shouldn’t play much of a role in this game.

Georgia prides itself on its dominant defense, and with two strong wins under its belt, I think the Dawgs have the ability to slow down Bama and make the Tide play their game. Whether they can win the game is another matter, but Georgia doesn’t have to break through against Alabama in order for us to make money off of it. All they have to do is keep this game close, and I think they can do exactly that.

I’m going to take Georgia and the points here. Note: Tons of gamblers are distraught after 5Dimes left the market, leaving players thinking they have nowhere to bet at reduced vig. Did you know that there are other shops that offer -105? Same platform, same wagering menu, same -105 odds!!! Find all of this and more at BetAnySports.