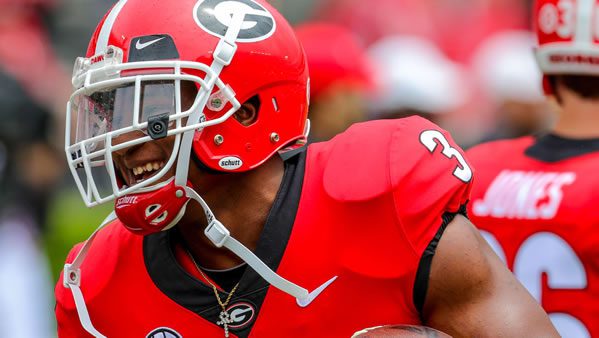 Point Spread: UGA -14/FLA +14 (Bovada - Offers live betting 100% of the game, opposed to other books that only offer live wagering during commercials! Offers 50% bonus too!)

It seems a bit unreal that a team that pushed Alabama to the limit could be getting two touchdowns against Georgia, but that’s the reality as Florida’s season has quickly unraveled. Losing to Alabama was more than respectable, but the Gators have also lost to Kentucky and LSU and find themselves in a completely hopeless situation as far as the SEC East is concerned. Even if Florida were to beat Georgia somehow, the Bulldogs would still own the SEC East as long as they didn’t lose to Tennessee or Missouri.

Georgia, however, has its sights set a fair amount higher than that. The Bulldogs have genuine national title aspirations this season, in large part because of their incredible defense. Georgia’s giving up less than a touchdown per game in 2021, and that could be a recipe for disaster for the Gators, who struggled with Kentucky in a 20-13 loss to the Wildcats. If Florida couldn’t handle Kentucky’s defense, it’s difficult to see how the Gators are going to do much of anything against the Bulldogs.

How the Public is Betting the Georgia/Florida Game

The public believes in Georgia, as 63 percent of tickets have come in on the Bulldogs here. It hasn’t moved the spread, but the total has ticked up a point from 50 to 51.

With Stetson Bennett in the game, Georgia is kind of a rich man’s Iowa: the Bulldogs have an offense that can lead a few successful drives, put up 20 or 30 points on their own and genuinely ensure that as long as the defense has even a decent day, they’ve done enough to win. Bennett was effective, not flashy in the win over Kentucky, and the Bulldogs did a decent job on the ground behind James Cook, which allowed Bennett to eventually find the creases in the Kentucky secondary and get the job done.
Florida has defended the pass pretty well but has been far less effective against the run, which could mean that the Bulldogs opt to put the game in Zamir White’s hands and let him try to make the big plays. Of course, this might all be irrelevant if J.T. Daniels is able to play, but if he’s not, the most likely scenario for the Dawgs is for White to get the bulk of the offensive work.

The Gators have been nowhere close to consistent in 2021, in large part because they can’t make up their minds as to who they want to trust under center. Anthony Richardson and Emory Jones both provide similar skills with running and passing, yet Florida can’t commit to one or the other. Both had their highs and lows against LSU, as they combined for four touchdowns as well as four interceptions, and the latter combined with a lack of a real running game spelled doom for the Gators.
When all goes well for Florida, the Gators have been able to rack up rushing yards with a speedy quarterback. But teams are starting to figure out that Florida doesn’t really have a traditional ground game, or at least doesn’t have a running back that it trusts enough with the ball. The Gators’ top two runners are also their top two passers, as Malik Davis and Dameon Pierce both have under 300 rushing yards for the season.

The Gators do spread the ball out reasonably well regardless of which quarterback is in the game, but an offense based entirely around one player getting the job done is a pretty tough ask against this Georgia defense.

These games tend to be low-scoring and tend to match expectations. Six of the past seven meetings have seen the favorite come out with the win, with the game usually not producing a high amount of points. The last true upset in this game came in 2014, when Georgia was ranked ninth in the nation but fell 38-20 to an unranked Florida. Since then, when one team has entered unranked, the ranked team has won the game by at least two touchdowns.
Neutral-site games have not been friendly to Florida as of late, in large part because the majority of them have either been against Georgia or Alabama. The Gators are just 3-7 ATS in their past ten at a neutral site, compared to 10-4 for Georgia.

With temperatures in the mid-60s and a mild wind of nine miles per hour blowing west-southwest, you couldn’t ask for a much better day for football in Duval County.

This looks like a curb-stomp battle. Florida couldn’t handle an LSU team that appears to have given up on Ed Orgeron, as the Tigers have only won one of their past four games, and it was against the Gators. Florida doesn’t even have the excuse that LSU was trying to win one for Coach O because that game was a day before the news broke that Orgeron would be fired.
If Florida couldn’t get by this LSU team, it’s hard to see the Gators staying close against a Georgia team with its eyes set squarely on Indianapolis. Give me the Bulldogs. Bet your pick and ALL your football and basketball picks each week at reduced odds -105 (instead of the -110 your bookie is socking you!) at one of the best sportsbooks on the web —–> BetAnySports!