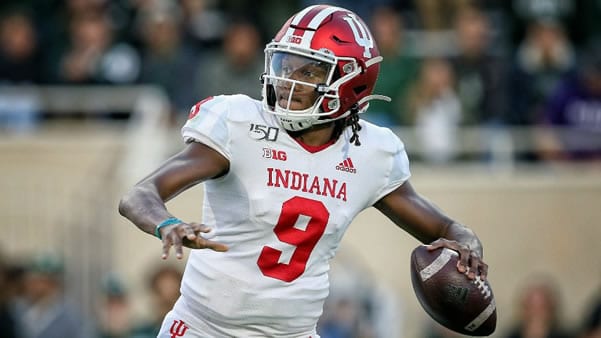 For the first time in 30 years, Indiana and Iowa are both ranked heading into their semi-regular Big Ten match-up, the season opener for both teams slated for Saturday afternoon, Sept. 4, in Iowa City. The Hawkeyes ride a six-game winning streak into this contest and a three-game winning streak against the Hoosiers. But Indiana thinks its got a good shot at snapping both those streaks, and they’re right.

Iowa’s favored by three and a hook here; how are we playing this game with our free Week 1 college football pick?

College football’s betting lines opened Iowa at -4.5 for this game, with an over/under of right around 46. Early betting action dipped that spread to -3.5 and bumped that total to 46.5 at Bovada.

Any bettors out there thinking Indiana might win this game outright could get a price of +140 on the college football money line.

This season, the Hoosiers return 17 starters from a team that played 6-2 last year, winning over three ranked teams but losing a bowl. Indiana started 4-0 last year, with wins over Penn State and Michigan, before falling gamely at Ohio State 42-35 but covering as a 20-point underdog. The Hoosiers then beat Maryland and, playing without their starting quarterback, “upset” Wisconsin in Madison 14-6 as 13-point dogs. Indiana then battled Ole Miss to a 20-20 tie in the fourth quarter of the Outback Bowl, lost 26-20 but covered at +9. In fact, IU played 8-0 against the spread last season!

Still, the Hoosiers haven’t won a bowl game since 1991, and they’ve yet to play in the Big Ten championship game. But you’d think at least one of those droughts would end soon, quite possibly this season.

The Hoosiers averaged 360 yards per game last year on offense, although that figure was 382 in the six games Penix started while allowing 378 YPG on defense. We expect Indiana to improve upon both those numbers this season.

The Hawkeyes, meanwhile, return 13 starters this season from a team that played 6-2 last year but had their bowl canceled. Last year, Iowa opened 0-2 with a four-point loss at Purdue and a one-loss at home to Northwestern. But the Hawkeyes awoke and won their previous six games by an average score of 36-14, beating Penn State and Wisconsin by a combined score of 69-28, going 5-1 ATS along the way. Iowa was one of the hottest teams in the country going into a bowl match-up with Missouri, but the game got canceled.

Still, the Hawkeyes haven’t played in the Big Ten championship game since 2015.

Iowa averaged 369 YPG on offense last year while holding foes to 314 YPG on defense. Our guess is the Hawkeyes will come very close to matching those figures this season.

The Hawkeyes are 7-1 SU, 5-3 ATS over the last eight meetings with the Hoosiers, 3-0 both SU and ATS over the previous three. Most recently, three seasons ago, Iowa beat Indiana 42-16 and covered at -3.5.

Our guess is this game will be much closer than that one.

The Under was 5-3 in Hawkeyes games last season, which averaged 48 points.

Indiana advanced from 5-7 and 5-7 its first two seasons under Coach Allen to 8-5 and 6-2 the last two. And this is his best team yet, especially with a healthy Penix at QB. Iowa, meanwhile, is still solid but maybe not quite as good as it was over its last six games last year. We foresee a good, tough, close match here, and three and a hook might come in real handy. We’re taking the points with the Hoosiers. Note: Don’t forget that we also offer you FREE NFL picks! Check out our season wins pieces!