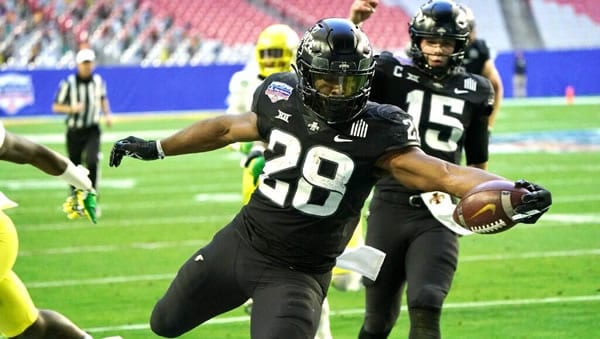 The preseason top ten in college football has some unfamiliar faces this season, with Iowa State, North Carolina, and Cincinnati all expected to have stellar years in 2021. However, I believe the Cyclones are the best of the new heralded bunch, and below, you will find seven reasons why they are a wise investment to exceed their over/under in total wins.

After finishing the 2015 season without a winning record, Iowa State hired Matt Campbell as their head coach following the great success he had turning around the Tulane football program. Campbell has since won three Big-12 Coach of the Year awards while leading his team to a winning conference record for the past four seasons in a row after they had achieved such an accomplishment just once in the previous 22 years. The Cyclones finished 2020 with their highest postseason ranking (8th) in school history, and all the pieces are in place for 2021 to their best season ever.

The top Heisman Trophy betting value you can find this preseason is Iowa State running back Breece Hall (+3300). The Cyclone junior is the only returning player in college football to receive Heisman votes in 2020, finishing 6th overall, after rushing for 1572 yards and 21 touchdowns and earning unanimous first team All-American accolades for his performance. Hall scored in every game and got into the endzone multiple times in nine of their twelves matchups last season and is certainly in line to do so again behind one of the best offensive lines in college football.

TOP OF THE LINE

Iowa State’s offensive line returns all five starters from the unit that helped pave the way for Hall’s NCAA leading yardage total and the 8th overall rushing offense in the country. A return from injury for one of their top players will only strengthen a unit that is ranked amongst the nations’ best going into the year, as left guard Trevor Downing is back and 100% healthy after being lost in week one a season ago. This should make Cyclone’s quarterback Brock Purdy’s life even easier than a season ago when his line allowed the least amount of sacks per game in the Big 12 Conference.

DEPOSIT $200 AND GET $200 FREE WHEN YOU SIGN UP THROUGH OUR LINK AND USE PROMO/BONUS CODE PREDICT100 AT MYBOOKIE SPORTSBOOK!

The junior Purdy is back for what could be his final season in Ames, with the NFL a possible draw next year. He is coming off an efficient season in which he earned 1st team All Big-12 honors for leading his team to a 9-3 record while completing 66% of his passes, throwing for nineteen touchdowns compared to nine interceptions, and also adding an additional five scores on the ground. How accurate Purdy is has had a definite correlation to the Cyclone’s success during his career, as the team is 16-1 when he completes at least 69 percent of his passes and 7-10 when he doesn’t.

Every player who caught a touchdown pass from Purdy is back from a season ago, but there are three in particular that are the standouts; wide receiver Xavier Hutchinson and tight ends Charlie Kolar and Chase Allen. Hutchinson won Big 12 Offensive Newcomer of the Year for his performance in a season ago where he led the conference in receptions (64) to go along with 771 yards receiving and four touchdowns and should be able to improve on those numbers with Hall forcing defenses to stay honest against the run and the dominant line up front giving Purdy time and room to throw. Rounding out the best of the offense is the tight end duo of Kolar and Allen, both of whom received all Big 12 honors a season ago, with Kolar finishing third in the conference in touchdowns with seven while also posting 44 receptions for 591 yards.

The Iowa State offense is certainly well accoladed, but their defense is one that definitely cannot be taken lightly. The Cyclones return nine starters from a squad that ranked in the top 25 nationally in scoring, rushing, and total yards allowed per game. Including three who received first team all-Big 12 honors; defensive lineman Will McDonald, linebacker Mike Rose, and strong safety Greg Eisworth. Rose was named Big 12 Defensive Player of the Year, McDonald tied the NCAA lead with 10.5 sacks to go along with 13.5 tackles for loss, and Eisworth has now received 1st team all-conference honors three times in his ISU career. They are far from alone when it comes to playmakers on the defense, with cornerback Anthony Johnson Jr., lineman Eyioma Uwazurike, linebacker Jake Hummel and safety Isheem Young amongst the remaining best.

Of the five games that Iowa State has against teams expected to begin the season in the top 30, four of them (Iowa, Oklahoma State, Texas, and TCU) they get at home where the Cyclones have gone 16-4 in their last 20 games. The road test against Oklahoma looms large in the second to last week of the season, but despite the likelihood of being a touchdown+ underdog against the Sooners, all hope is certainly not lost, especially when you consider they have beaten OU twice in the past four years, including a 36-31 upset as a 31-point underdog in Norman in 2017.

Iowa State has never finished a season in school history with double-digit wins, but I expect that streak to come to an end in 2021 and believe they are a great bet to exceed their expected 9.5 win total, along with Breece Hall becoming the first Cyclones player ever to win the Heisman Trophy at a bargain price of 33-1. Where are you betting on football this season? Wherever it may be, there’s a 99% chance that you’re betting on games at -110 odds (or higher). Did you know that there’s a ROCK SOLID sportsbook that you could be wagering on games at only -105 odds? YES! Dump our over-priced bookie TODAY and start betting cheaper at BetAnySports! You’ll be so glad you did! We’ve advertised them for 10+ years with ZERO complaints! Click here to sign up now!