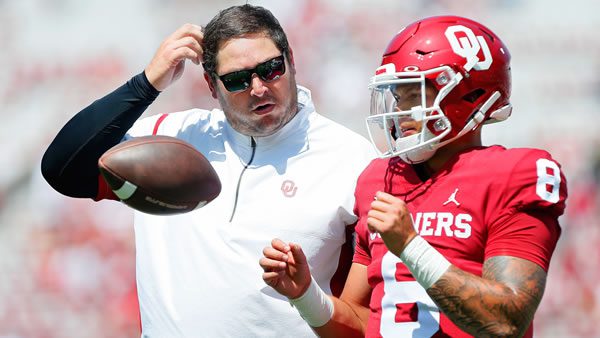 Bill Snyder might be the greatest coach Kansas State football has ever known, but it’s Chris Kleiman who’s proven to be a bigger thorn in Oklahoma’s side since taking over the Wildcats. In three meetings with the Sooners, Kleiman’s K-State teams are 2-1 SU and 3-0 ATS, with the Sooners’ only win coming by a mere six points.

But does Kleiman’s team have the passing attack needed to keep up with Oklahoma? Adrian Martinez got a fresh start in Manhattan, but he hasn’t been the answer and hasn’t looked like the dynamic player he was at Nebraska. Instead, K-State has limited both the floor and the ceiling for Martinez, resulting in an offense that just doesn’t do a heck of a lot. K-State plays excellent defense, but at some point, you have to put points on the board to win games.

That’s especially true when facing Oklahoma, although it remains to be seen how Brent Venables will respond to genuine adversity as a head coach. In three games so far, the Sooners have blitzed UTEP, Kent State, and Nebraska, and the Huskers don’t look like they’re going to be anywhere close to bowl eligible this year. With Kansas State proving to be a real stumbling block for the Sooners in recent years, this spread might have been pushed a bit too far.

How the Public is Betting the Kansas State/Oklahoma Game

When Kansas State Has the Ball

Perhaps K-State deluded itself into thinking it had a potent offense after putting up 40 points on Missouri in the second game of the season. But three things are true about that game: the Tigers have a terrible defense, Missouri turned it over four times to gift K-State short fields, and the Wildcats didn’t do all that much in the air. Martinez only threw 9-for-20 for 101 yards, and all but one touchdown came on the ground (with the exception being a punt return).

K-State has playmakers, namely Deuce Vaughn and Phillip Brooks. But the Wildcats don’t seem to trust Martinez enough to make big plays happen or to let him connect with his skill players for points. Vaughn is plan A, but K-State has not yet found a good plan B if plan A gets shut down. Given that Oklahoma allows a reasonable 118 rushing yards, a game plan A probably will at least have a lesser impact if not get shut down entirely. The Wildcats must do something different here.

Dillon Gabriel has had no restraints on him in his first year in Norman, and the results have been fantastic. Gabriel was used to playing fast at Central Florida, and Oklahoma’s offense has fit his talents well to this point. However, it might be a good idea to tap the brakes a bit, considering that Oklahoma has played a soft schedule to date and its one game that was supposed to provide a challenge…just didn’t.

That leaves the Sooners in an odd spot: they’re facing the team that has drove them nuts for years but hasn’t really slowed them down on defense. Oklahoma’s offense has never been the problem in this series, and the Sooners have a powerful ground game of their own with Eric Gray leading the show. The question is, how do you attack a K-State defense that’s proven strong against both the run and the pass? Whatever the Sooners decide, they have the better athletes and will have the advantage if they can commit to one strategy that works.More Picks: Stanford at Washington Week 4 Betting Analysis & Predictions

In past years, picking points was the way to go in this matchup. These teams have cashed the over in 12 of their past 14 meetings, as both routinely had high-powered offenses and defenses that did just enough. That’s no longer the case, as the Wildcats showed by playing to the under in five of their past six contests. Oklahoma Unders have also been a wise play; the past five Sooner games in September have all gone under the number.
Even though Oklahoma has had the better of this series in the long term, Kansas State’s success for bettors dates back to before Kleiman took over in Manhattan. The underdog has covered in four of the past five matchups — all ATS wins for K-State.

There’s a reason this game’s being played at night, and it isn’t just because of television. The high will hit 97 in the day, but at kickoff, it will be a mild 70 degrees with winds of eight miles per hour going southwest.

This is a tough one. For me, the best bet is the Under because I think both defenses can slow down the other side. Kansas State’s offense just isn’t doing enough to impress me, but I think the Wildcats can at least hang around because of their defense.

The Sooners might pick up a win here, but I think the Wildcats earn the cover. Give me K-State. Question: Do you bet on games live-in-progress? If so, have you seen the awesome live betting platform at Bovada Sportsbook? Most bookies have clunky, slow, confusing, multi-click platforms that make it hard to get a bet down before the line moves. None of these issues at Bovada! Plus, they give you a 50% real cash bonus up to $250! Cilck here for a better experience!