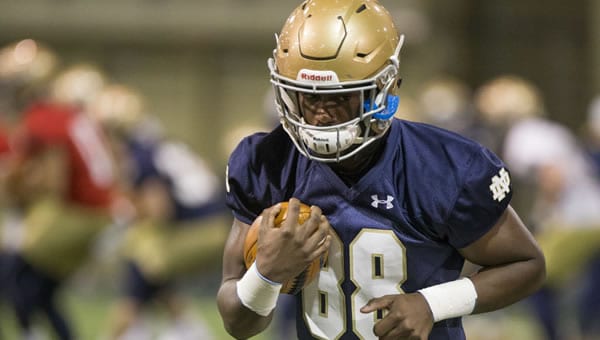 Point Spread: ND -20 / GT +20 (Best Teaser Payouts – You can tease ND down to a pick’em by adding them into a 20 point college football teaser at BAS!)

The Georgia Tech Yellow Jackets play host to the Notre Dame Fighting Irish in Atlanta for a Saturday afternoon ACC showdown on ABC. Notre Dame has a 28-6-1 historical edge in the series that began back in 1922 and won the last meeting between the teams 30-22 in 2015.

It’s been a tough run for Georgia Tech head coach Geoff Collins since he took over sideline duties in 2019. After going just 3-9 last season, Georgia Tech is now off to a 2-4 start, with their four losses by at least 17 points apiece and by an average of over 30 points per game. Of the five games left on their schedule, a home matchup against Duke is the only one in which they will be playing a team with a worse record than they have. So, unfortunately for Collins and Yellow Jacket fans, things appear as though they may be getting worse before they have any chance of getting better.

After a four-player quarterback competition before the season started, Geoff Collins and Georgia Tech decided on strong-armed, true freshman Jeff Sims to lead the team. Sims performance has been a mixed bag thus far, throwing for eight touchdowns compared to ten interceptions. He has especially struggled with accuracy, completing only 55% of his passes while also throwing at least one interception in five of their six games. Sims has played better of late, though, putting up a 3/8 TD-INT ratio in their first three games but a much improved 5/2 ratio over their past three. His ability to make plays with feet bode well for his continued success, as he already rushed for four touchdowns on the season while posting at least 40 yards rushing in every game except for the Clemson 73-7 massacre.

Joining Sims at the top of the teams’ best ground threats is running back Jahmyr Gibbs, who leads the team with 308 yards rushing while catching 15 passes for 218 yards and scoring five total touchdowns. Gibbs had his worst game of the season a week ago against Boston College, rushing eight times for just nine yards, and will undoubtedly have his work cut out for him this week against a Notre Dame defense that ranks 13th nationally in rushing yards allowed per game. Who will be joining Gibbs in the backfield remains to be seen, as Dontae Smith and Jamious Green are second and third amongst running backs in carries and yards, but neither saw any groundwork against Boston College a week ago.

There are only three wide receivers on Georgia Tech with over ten receptions on the season; Malachi Carter, Jalen Camp, and Ahmarean Brown. Camp and Carter are the top two, with each having scored two touchdowns with at least 15 receptions and 215 yards receiving. Brown was last year’s team leader in all receiving categories but is off to a slower start this year with just 11 catches for 183 yards and one touchdown through the air.

The entire Georgia Tech offense will be up against another tough test. This match coming up against a Notre Dame defense is 9th in total yards allowed per game and 6th in scoring with an impressive average of just 9.8 points per game allowed. In games against Duke, USF, Louisville, and Pittsburgh, the Irish allowed only two combined touchdowns and hope to continue their uptick in turnovers caused against a Yellow Jacket team that ranks 90th with a margin of -7. This has been a pretty accurate indication of their success, as Georgia Tech has a turnover ratio of -11 in their four losses and +4 in their two victories.

Irish quarterback Ian Book is coming in off his best passing game in a while, throwing for over 300 yards for the first time in 15 contests. On the season, the Notre Dame signal-caller has thrown for six touchdowns compared to just one interception while also rushing for five scores. He has definitely struggled at times, though with accuracy issues, on the season completing under 60 percent of his passes. Thankfully for Book, this week should be another good stretch to work out any remaining kinks from the first half of the season before entering their make or break to the BCS run of the schedule that includes Clemson and North Carolina in November.

Two new Book targets stood out against Pittsburgh a week ago, wide receiver Ben Skowronek and tight end Michael Mayer. Skowronek had two receptions for 107 yards and two scores, with his first one a leaping grab followed by a sprint to the endzone that set an early tone for what would be a dominant Irish win. Mayer appropriately wears No. 87 as a Rob Gronkowski type clone, is coming off of the best game of his freshman season, and has now scored twice over his last three games. Unfortunately, though, Skowronek is questionable for Saturday due to injury, along with fellow wideouts Brandon Lenzy and Lawrence Keys III. This will lead to even more air action for Javon McKinley, Tommy Tremble, Avery Davis, and burgeoning star Mayer.

The Notre Dame backfield had an easy to predict tough time of it against a stout Pittsburgh defense, though even with a poor yards per carry average lead Kyren Williams was still able to get into the endzone for the fifth time this season. Williams and backup C’Bo Flemister should both find the goings much easier this week against a Yellow Jacket defense that ranks 86th in yards against and 92nd in scoring.

Betting Georgia Tech over the last few years seems to come down to one simple solution. If you think they are going to win, you should bet on them to cover, and if you expect a loss, you should side with the opposing team. The Yellow Jackets are 20-2 against the spread in their last 22 victories but just 1-19 versus the number in their previous 20 losses. Georgia Tech’s offense is simply no match for the Notre Dame defense, and if the Irish are able to build an early lead, it will be that much harder for GT to have any chance of mounting a comeback. One thing to keep in mind is the obvious look ahead letdown factor that could come into effect for Notre Dame with their season-on-the-line matchup with Clemson next week, but the Irish have handled that situation well of late as they are 6-1 against the spread in their last seven games the week before playing a ranked team. I expect that success to continue on Saturday in Atlanta with a convincing win and cover against Georgia Tech.

Mike’s Pick to Cover the Point Spread: Notre Dame -20. Bet your Week 9 college football picks FREE by depositing $100 to $300 and getting that same amount bonuses to your wagering account at MyBookie Sportsbook! Example: Deposit $200 and they’ll give you an extra $200!