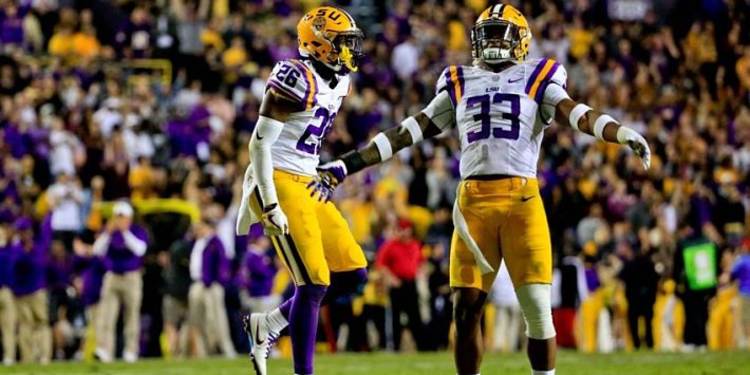 The LSU Tigers have become a legitimate NCAA Football Playoffs contender thanks to last week’s convincing victory over no. 2 Georgia 36-16. I was personally very surprised by the victory last week. I previously believed LSU’s offensive struggles would continue to thwart their efforts to beat an elite team. Instead, I was proven wrong as the LSU offense had one of their best performances of the year and the Tigers defense lived up to the hype by shutting down one of the most prolific offenses in the country. However life in the SEC is never easy and LSU will have to get ready for a quick turnaround as they host the no. 22 Mississippi State Bulldogs in Death Valley this Saturday night.

Last week the Bulldogs added to Auburn’s turmoil in a 23-9 upset over Auburn. Now Mississippi State will have the opportunity to do something they have not accomplished since 2014 by winning back to back SEC West games in the same season. However, the task will be difficult against one of the most talented defenses in the country and at one of the most difficult venues in college football; a Saturday night in Baton Rouge. As 6.5 point underdogs, this is a spot where Mississippi State has been successful going back to the start of last year covering 5 of their last 6 ATS winning 3 of those contest outright. Needless to say, this should be a war between two solid football teams.

Who has the better defense?

Despite the way the stats may unfold, I have claimed that LSU has the most talented defense in the SEC all season. They are stacked with NFL talent and despite my continued concerns for the offense; this defense is good and they proved it last week by holding Georgia’s dynamic offense to just 16 points with 322 yards of total offense. LSU held Georgia’s dominant rushing attack to just 113 yards and stood strong against the pass despite the game flow which forced the Bulldogs to throw the football consistently. With so much upside on defense, you have to expect LSU will be tough to beat in any game this season. However, will they be the best defense on the field on Saturday?

Mississippi State’s defense is also extremely talented with a dominant defensive front. Montez Sweat is 2nd in the FBS with 7.5 sacks on the season and ranks in the top 15 for tackles for loss. Meanwhile, Jeffery Simmons has been impressive as well disrupting opposing rushing attacks with 8.5 tackles for loss. From a talent standpoint, it seems LSU has the most talent when you talk about NFL scouting and prior recruiting rankings. However, the Bulldogs have been the better defensive team statistically and actually lead the nation in scoring defense allowing just 12.7 points per game. This unit is very disciplined and strong upfront which will be a good matchup against an LSU team that heavily favors the run.

Reasons to bet the under!

As far as expectations go, I expect this game to be a defensive battle from start to finish. The styles are very similar and each defense’s strength matches up well against the opposing offenses. I have voiced my concern for LSU’s quarterback woes since the start of the year. Last week QB Joe Burrow had one of his best outings of the season against Georgia but I am far from convinced that will be the trend. The Tigers offense really opened up because they busted open a few big runs early in the game. I doubt that happens this week against this Mississippi State defense and expect things to be a grind throughout the game.

Likewise, Mississippi State’s offense is in a similar position. Quarterback Nick Fitzgerald is having a disastrous season throwing the football completing less than 50% of his passes with just 4 touchdowns and 3 picks. Fitzgerald leads the team in rushing with 513 yards and running back Kylin Hill has been solid averaging nearly 7 yards per carry. The problem remains that Mississippi State’s strength at rushing the football will be facing the strength of the LSU defense in stopping the run. Both offenses are going to run the ball often and have little success. This is a recipe for the game clock to continue moving to produce an old fashioned SEC low scoring game!

Jay’s Pick to Cover the Point Spread: Take the under 45