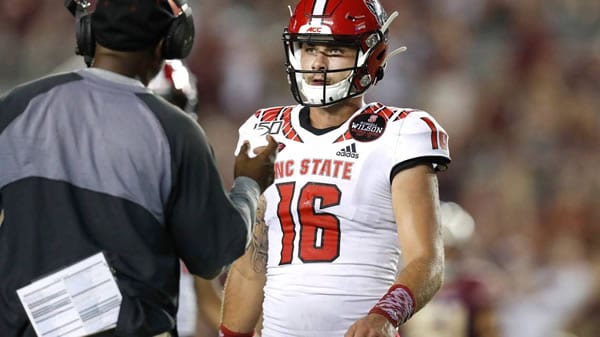 With no divisions in the ACC this year, Miami and N.C. State somehow found their way onto each other’s schedules in a presidential election year for the fifth consecutive time (this will be their sixth meeting since Miami joined the ACC, and 2007 is the only time they’ve met in a non-election year). At least this time, there’s quite a bit at stake for both of these teams, as both are still in the race to be Clemson’s dance partner (or is that punching bag?) in the ACC championship.

To get to that daunting matchup with the Tigers, both teams will have to run the table on their own schedule and get a little bit of help. Miami is in better shape than State as far as the standings go because the Canes still play North Carolina and would control their own destiny if they can beat the Heels and someone (read: Clemson and North Carolina) takes down Notre Dame. Even if the Hurricanes can’t earn a second shot at Clemson, 11-1 could earn them a very nice bowl bid and a chance to say their program is on the way back. However, the Canes’ ground game has been stuck in neutral — and that’s being kind — ever since the calendar turned to October, which made them very one-dimensional in escaping two mediocre opponents in Pittsburgh and Virginia.

Seeing a mediocre ground game would be welcome for State, which got absolutely shredded on the ground against Carolina, conceding 160 rushing yards and three of the Heels’ five rushing touchdowns to Javonte Williams in a 48-21 loss. Of course, four turnovers didn’t help either, but the Wolfpack’s defensive effort was so poor that it wouldn’t have made any difference even if State had hung on to the ball. A win here would make an ACC title game appearance possible, as State’s remaining league schedule is so weak that the best team left on it after Friday is Georgia Tech. More realistically, a win here would give the Wolfpack a good chance to end the year with ten wins, something they haven’t done since 2002.

How the Public is Betting the Miami/N.C. State Game

With 55% of tickets on the Hurricanes, the line has ticked up from opening at -9 to Miami -10. The points have gone against State’s offense, as the total has dropped a point from 58.5 to 57.5.

BET YOUR WEEK 10 COLLEGE FOOTBALL PICKS FREE WITH A 100% REAL CASH BONUS ON YOUR FIRST DEPOSIT OF $100 TO $300 AT MYBOOKIE SPORTSBOOK!

N.C. State:
Safety Khalid Martin is questionable with a hip injury, while offensive lineman Timothy McKay, linebacker Devon Betty, wide receiver Jasiah Provillon, safety Tanner Ingle and running back Trent Pennix are all questionable with undisclosed issues. Running back Ricky Person Jr. is questionable after suffering a concussion, and quarterback Devin Leary is out until December.

Wonder why Miami’s offense is struggling as of late? Look no further than the performance of running back Cam’Ron Harris. The Hurricanes got off to an excellent start on the ground this season, but in their past three games, the running game has been nonexistent. D’Eriq King has been the leading rusher for the Hurricanes in three of their past four games. While one of those was a blowout against Florida State that was over by halftime, the other three were games where Miami should have been running its regular offense from beginning to end. Instead, Harris had a total of 35 yards in those three games, and his eight yards against Virginia was so poor that he began losing touches to freshman Donald Chaney.

That said, this could be the game where Miami turns things around because statistically, N.C. State’s run defense is nowhere near the quality of Pittsburgh, Clemson, or Virginia. While Pitt leads the conference in run defense, State gives up 182 yards per game on the ground, a number that got much worse after North Carolina absolutely gashed the Wolfpack. But a look at State’s schedule reveals that its run defense might be better than it looks. The Pack were gashed on the ground by both Carolina and Virginia Tech — the two teams that beat them — but the Heels rank third in the ACC in rushing, and the Hokies lead the conference. Miami’s much more of a passing team that gets its ground game from King scrambling when he has to.

The reality is that the Hurricanes’ ground game is struggling, and without it, Miami doesn’t seem to have the explosiveness it needs in the passing game to make up for it. If the Canes can’t get a ball carrier on track, this game could be closer than people think.

It doesn’t get more simple than this: State’s got to stop turning the ball over. Two things have been true in both of State’s losses: the Wolfpack have lost the turnover battle, and they’ve allowed themselves to get shredded on the ground. The offense can’t do anything about the second one, but Bailey Hockman has to take care of the ball and make good throws.

Hockman will get the start after the Wolfpack’s attempt to jumpstart the offense with backup Ben Finley backfired hard, as Finley turned the ball over three times and turned the game from a 14-0 deficit when he took over to a 38-7 hole by the time Hockman came back into the game. Miami thrives off turnovers and quick strikes, so Hockman will have to make sure that the Wolfpack extend drives and avoid giving the Hurricanes a short field to work with. State’s first three drives against Carolina were all over in 95 seconds or less, which left the defense too exhausted to stop the Heels when the ground game got going. State is not the kind of team that’s likely to grind out games — especially if Ricky Person is unable to play, which would leave Zonovan Knight as the main man instead of one of two backs for the Wolfpack — but the Wolfpack can at least keep themselves on the field and make Miami prove it can drive the field against their defense. It’s fine if the first few drives end with punts, as long as the Wolfpack gain a couple of first downs and force Miami to start inside their own 25.

Expecting points has been a major part of betting on N.C. State football in 2019 and 2020. Nine of the Wolfpack’s past 12 games have gone over the total, and the three exceptions all came against one of their in-state rivals (Duke, North Carolina, and Wake Forest). In 2020, it would be a perfect six-for-six but for the fact that Duke left its offense in the locker room at halftime and a 20-14 halftime lead for the Blue Devils turned into a 31-20 State win that came in 8.5 points under the total. However, Miami counters with a defense that’s proven pretty stingy outside South Florida; 16 of the Hurricanes’ last 21 road games have gone under the total.

As for the spread, whatever the Hurricanes are doing with their weeks off isn’t working as of late. Miami has failed to cover in its past four games when it’s coming off a bye week, as something seems to be going wrong with their momentum. Something has to give in that department, though, as the Wolfpack have failed to cover in six consecutive games in November.

November in the Research Triangle means perfectly pleasant weather, as temperatures will be around 73 degrees with a slight six-mile per hour breeze blowing northeast.

The increasing total has me worried about taking the Hurricanes here, especially given Miami’s struggles on the ground. The way that you beat State is by taking the ball right at the Wolfpack and forcing them to stop your ground game, and unless the Hurricanes plan to run 20 times with King, Miami really doesn’t look like it can do that at the moment. The past two games for the Hurricanes have given the impression of a team that is starting to leak oil, and while they’ve gotten away with it in the area that they care about, I don’t think they’re going to get away with it where we care about it.

This looks like a defensive struggle to me, which means that I’m taking State and the points and pairing it with the under. Even though State’s been as automatic as it gets in hitting the over as of late, I think Miami’s combination of a struggling rushing attack and a solid defensive effort means points will be at a premium in a game I expect the Hurricanes to survive by one score. Question: When you bet on games, does your bookie make you lay -110 odds on sides and totals? If so, you’re overpaying. Did you know that you can bet on games at -105 odds at BetAnySports? Dump your overpriced book TODAY and start betting smarter and saving your hard earned loot! It adds up to HUGE savings over the long haul!