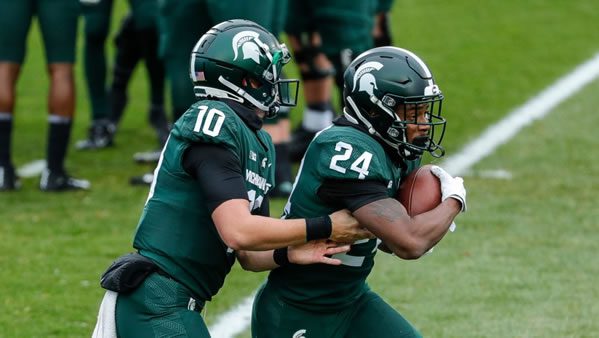 Where: Ross-Ade Stadium, West Lafayette, IN

(Not all sportsbooks are created equal! It pays to line shop! Check out our top rated list >>>)

The Michigan State Spartans currently have a perfect 8-0 record coming off a huge win over Michigan last Saturday afternoon. The Spartans overcame a 30-14 deficit outscoring the Wolverines 23-3 in the final quarter and a half. Going into last Saturday’s game, there were questions on Michigan State’s ability to deliver in big games, as this was just their second game versus a ranked opponent of the year. After starting the year unranked, the Spartans have moved up to #5 in the AP polls and will look for a dominant game at Purdue to make a bid for a spot in the college football playoffs.

The Boilermakers bounced back Saturday with a win on the road against Nebraska 28-23. O’Connell had an efficient game with a 75% completion rate, but the Purdue defense secured four interceptions, which was the difference in a 5-point win. Purdue’s most notable win on the season came three weeks ago when they upset #2 Iowa 24-7, where their defense held the Hawkeyes to one touchdown and again had another four-interception day on defense. Currently sitting at a 5-3 record, the Boilermakers defense has kept them in the mix in the Big 10 West.

Kenneth Walker transfers from Wake Forest into East Lansing and quickly makes an impact on the Spartans season and can be thanked in large part to their offensive success. Through eight games, Walker has already 1,194 yards and 14 touchdowns on the season. Going into Purdue on Saturday, the Michigan State offense should take advantage of the mediocre Boilermakers rush defense who ranks outside the top 50, giving up 140 YPG on the ground and allowing 4.0 yards per rush. Coming off an effort just shy of 200 yards and 5 TDs versus the Michigan defense, so long as Walker gets the touches, he should be able to have himself another Heisman day against the Purdue defense.

Taking Care of the Football

Going into the Week 10 matchup, we see two different narratives as far as taking care of the football and the turnover margin. The Spartans have a +5-turnover margin with seven interceptions and seven fumble recoveries. In last Saturday’s win over the Wolverines, the Spartans defense came up with a fumble and the game-sealing interception to end the game. Switching over to the Boilermakers defense, we see a different defense when it comes to turnovers. Purdue has just two fumble recoveries on the year but an impressive ten interceptions through eight weeks. Despite the 12 turnovers, Purdue currently has a -1-turnover differential, which means their offense has struggled. Saturday’s contest is going to come down to who can win the turnover differential as most football games do. Given Purdue’s success getting interceptions on the year and Michigan State’s Kenneth Walker having a dominant season, I wouldn’t be surprised if we see a season-low for passing attempts from Payton Thorpe as they look to keep the ball in Walker’s hands.

Michigan State has been able to find the end zone without much resistance this year inside the 25-yard line. The Spartans have scored on 27 of their 31 red zone trips on the year, which includes 19 touchdowns. This efficiency is again in part to their dominant run game, which helps to keep red zone turnovers at a minimum. Looking at the Purdue defense in the red zone, they have allowed 19 scores on 25 trips from opposing offenses. If Purdue is unable to turn the tides with their red-zone defense, the Spartan run game come the third and fourth quarter may have little to no resistance in striking distance.

The Boilermakers Spartans, despite being both in the Big 10, are in different divisions, which means this Saturday will be only their fifth matchup in the last eight seasons. The last time these two teams met was in 2018 when both teams had different rosters, and ultimately, the stats have little to no impact on Saturday’s game. The only trend worth mentioning is that Michigan State holds an eight-game winning streak over Purdue, which includes three games on the road.

How the Public is Betting the Michigan State Spartans vs. Purdue Boilermakers.

73% are betting the Michigan State Spartans against the spread.

58% are wagering on the game to go under the posted total of 54.

Saturday’s matchup presents a lot for both sides to play for, though Michigan State has more to lose on the cusp of a Top 4 ranking. Purdue is just one game back in the Big 10 West, so they are still playing for the division title.

MSU goes into Saturday as a road favorite (-3) for a good reason. Even though Purdue has played well at home this year and has upset a Top 5 team, I believe the Spartans run game will prove too much for the Boilermakers defense. Take MSU to cover the spread of -3. Bankroll running low? Instead of re-depositing and getting nothing (or a tiny reload bonus), consider doubling your bankroll with a GIANT 100% real cash bonus on your first deposit of $100 to $500 at GTBets Sportsbook! They have an awesome rewards program!