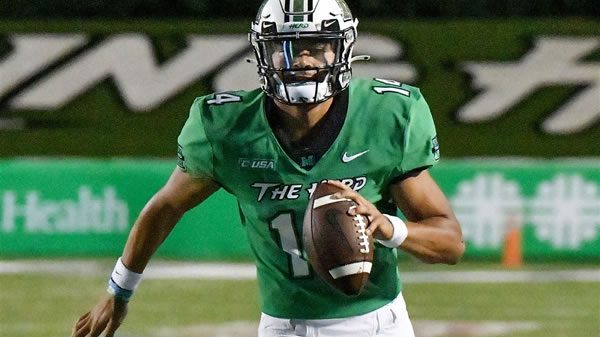 Point Spread: MRSH -10/CONN +10 (Bovada – 50% bonus! Rebates on ALL bets; win or lose! FAST crypto payouts and the BEST live betting platform on the web! What more could you ask for!)

The Marshall Thundering Herd takes on the Connecticut Huskies in the Myrtle Beach Bowl at Brooks Stadium on the 19th. Connecticut is seeing its first bowl action since 2015. While their last game was a loss to Army, the three-game spurt that preceded that allowed them to get here. They face a Marshall team that hasn’t had much luck in their last several bowls, looking to exorcise that demon in this spot. A 4-game win streak as they enter this, including a 28-23 win over Georgia State, has the Sun Belt’s Thundering Herd looking good in the late season. Who can get us the cover in the Myrtle Beach Bowl?

It will be curious to see what the Huskies can come up with following a break of one month since their last game, the bad showing against Army. Considering the depths this program has sunk to since their last bowl appearance; you’d expect some hunger from a team that doesn’t make it to bowl games often. And while they were able to forge a strong season by their standards, they’re quite imperfect, and their home/away splits should elicit some concern this week. With a 1-5 record away from home and distinctly less scoring, how good will they look on this South Carolina field come next Monday?

Losing by an average of 15 points in their last three bowl games, Marshall has become quite undependable in this role as of late. But this season, they’ve been good on the road, with their stingy defense really showing up lately in away games. In their last four road games, no opponent has surpassed 16 points of scoring. They’ve been really strong against the run as of late, which just so happens to be what the Huskies rely on the most. It’s unlikely the Thundering Herd will need to be too concerned with Huskies’ QB Zion Turner and their moribund aerial attack.

The loss to Army notwithstanding, Connecticut was looking about as good as they had in a long time leading up to that, coming off a 36-33 win over Liberty where they were two-touchdown dogs. They have a strong run-game led by freshman Victor Rosa, who is coming off a season-high in yardage against Army. Connecticut is hoping that a defense that kind of sagged at season’s end can use the month off to good use and come into this game with some more energy.

Again, their haplessness on the road has become more than an aberration, as it’s a piece of analysis that might have some teeth. And that doesn’t bode well against a team that plays so well away from home and is getting a better geographical shake of luck for this bowl game. When you combine Marshall’s defensive prowess, especially against the run, with Connecticut’s narrow offensive scope, it doesn’t really bode well for the Huskies.

At root, taking a more-defensive team that has been pulverized in their last three bowl appearances and laying double-digits against an unfamiliar foe wouldn’t appear to be the strongest move. The Thundering Herd’s 24 point per game scoring clip doesn’t make it that thrilling to take them, giving a lot of points. Granted, the Connecticut defense is nothing special, but they can sometimes surprise with how rigid they are while coming up with enough big plays to make the sledding tough for a team like Marshall. The UConn secondary can make a lot of plays, and they can get after the QB a little bit.

Still, Marshall freshman QB Cam Fancher has lent more to this offense since joining the fray midseason. Much of Fancher’s aerial highlights have come in the last several weeks, while his legs add a big dose of production to a ground-game that can do damage along with top back Khalan Laborn. But make no mistake, with a defense that has been among the most rigid in the nation statistically, Marshall looks to flex that big-time on the Huskies in this spot. And a potential Connecticut backer has to ask what is realistic to expect in this spot from that offense against this Marshall “D.”

While one can justify the belief that the Huskies’ defense can maybe vaguely compete with a Marshall offense that isn’t exactly electric or automatic, the equation becomes murky when searching for where the Connecticut scoring is supposed to come from. With the run being their only viable route to success and that being the specialty of the Marshall defense, they’re going to need the defense to do something big, get a few huge plays, and try to hang in there. It’s just without those developments, a straight-ahead breakdown of this game doesn’t do the Huskies a lot of favors.

Taking Marshall as a large-sized favorite might not be the best context for the Thundering Herd. They can struggle on offense and make it hard to cover a big number. I would rather just bank on the Marshall defense and not have to sit there waiting for Connecticut to get something going on offense in this spot. First off, they’ve been duck soup on the road. They can only run the ball, and this might be one of the toughest matchups they’ve had in that regard all season. I think it all shakes out to a routine win for Marshall. I’ll take the Thundering Herd.

Loot’s Pick to Cover the Point Spread: I’m betting on the Marshall Thundering Herd minus 10 points. Bet your college bowl game predictions for FREE by scoring a 100% real cash bonus on your first deposit up to $500 by entering bonus code PREDICTEM on the Special Offers page at the web’s oldest and most trusted sportsbook —> Everygame!