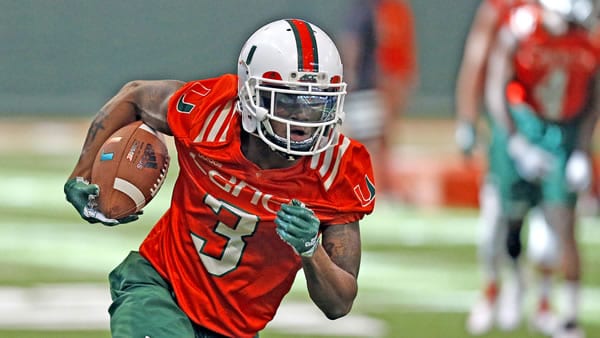 This game has lost some of its luster after North Carolina lost to Notre Dame, officially keeping the Tar Heels out of the conference championship game. But there’s still an opportunity to finish third in the ACC, which would be no small feat for either of these programs as they try to scale their way back up the mountain in the league. For the Tar Heels, it’s a chance to prove that they can actually get the job done in a true road test. Carolina has been outstanding in the Triangle all season, but other than the eight-mile trip to Duke, the Tar Heels have been rather terrible on the road. Carolina lost to both Florida State and Virginia on the road, and their only win where they’ve had to travel for more than half an hour was a four-pointer at Boston College.

On the other hand, Miami is eager to show what it can do with a full team at its disposal. The Hurricanes weren’t really able to play to their potential throughout November because COVID decimated their squad, leaving them just trying to survive when they were able to play. However, they looked to be very much at their best a week ago when they obliterated Duke. But that said, Duke is Duke, and the Blue Devils haven’t put up much of a fight against anyone this season. North Carolina is a stiffer test and one the Hurricanes want to prove they’re ready for. Can they get the job done here?

How the Public is Betting the North Carolina/Miami Game

The public is split on this one in terms of tickets, with 51 percent on North Carolina. There’s been enough money on the Tar Heels to push the line in their direction, as it’s dropped from -4 for Miami to -3. The total has increased, jumping from 65 to 66.5.

If the Tar Heels could get consistent play out of Sam Howell, they’d be in much better shape. However, Howell has bounced back and forth between strong play and inconsistent play, and he’s yet to have two good games in a row. When Howell isn’t on, North Carolina has had to turn to its ground game, which has also had middling results.

At times, Michael Carter and Javonte Williams have been a 1-2 punch as good as any in the country, as both backs have surpassed the 900-yard mark on the ground. But in the losses to Virginia and Notre Dame, neither player really got started, as neither topped 65 yards in either game. That’s a problem because North Carolina is built around scoring and scoring a lot. The Tar Heels have topped 48 points in every win they’ve had since the second game of the season when they were just finding themselves. Over the past eight games, the Tar Heels are 5-0 when they score at least 48 points and 0-3 when they don’t, including a 41-point showing in the loss to Virginia.

That could be a real problem against a Miami defense that’s proven to be pretty solid this season. Over the Hurricanes’ past seven games, only Clemson and N.C. State has managed to top 24 points, a number North Carolina usually gets by halftime.

Here’s how little Miami cares about having a strong ground game. The Hurricanes dominated Duke from beginning to end. They won the game 48-0. They led 42-0 at the end of three quarters and had the entire fourth quarter to do nothing but run the ball. And the Hurricanes still didn’t end the game with a 100-yard rusher, as Cam’Ron Harris finished with only 96 yards.

The reality is that Miami doesn’t need a lot from its ground game in order to win because it’s got a solid passing attack under the control of D’Eriq King and a rather stingy defense. The Hurricanes have had a 100-yard rusher just once in the past seven games, and that was the only game in which the defense let down. This is an attack that prefers to let King do the work by finding Mike Harley and Mark Pope, and they’ll fill in the rest of the details once they get past that basic step. So far, it’s worked pretty well: Miami averages 34.9 points per game, and King has found five different receivers for at least two touchdowns this season.

Here’s an interesting trend over this series: the losing team’s score has been 25 or less in every matchup since 2008. In fact, the losing team has never once topped 24 points when the game has been played in South Florida, regardless of which team actually wins the contest. When Miami has been the winner in its home stadium, it’s tended to be a blowout, while every North Carolina win in Miami has been decided by seven points or less. In that same stretch, the Hurricanes’ closest margin of victory against the Tar Heels in Miami was 20 points.

Carolina also hasn’t tended to do well as the underdog, as the Heels have covered in just one of their past seven contests when they’ve been getting points. That struggle could be offset by another fact of life: Hurricanes tend to weaken in December. Miami has certainly proven that true; the Hurricanes are just 2-9 ATS in their past 11 December games. That’s true for their offense as well: the under has hit in 13 of Miami’s last 16 games in December.

This is December in Miami for you: 80 degrees, sunny, and the wind blowing southeast at nine miles per hour. This is perfect surf weather but might be a little warm for football.

North Carolina’s poor road performances have me thinking twice about trusting the Tar Heels in a matchup like this one. The Heels have shown up exactly once on the road all season, and that was after an eight-mile bus ride. I think they’re going to come out flat against a Miami squad that’s ready to hit on all cylinders, and I’m not at all scared of this small spread.

Give me the Hurricanes to cover here. Bet them for FREE by taking advantage of a 100% REAL CASH bonus offer on your first deposit of $100 to $300 at MyBookie Sportsbook! Must use bonus code PREDICT100 when signing up to get the bonus credited!