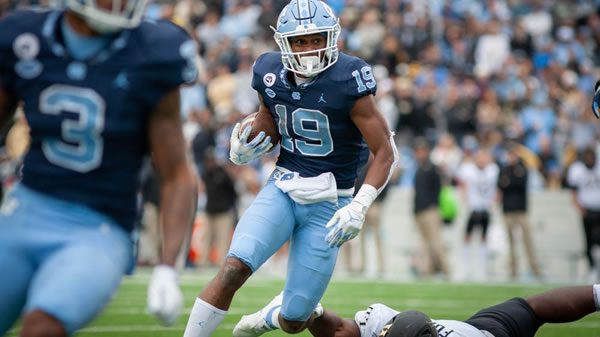 This is North Carolina’s last stand as far as staying in the race for the ACC Coastal Division crown. With losses to bottom-feeders Virginia Tech and Georgia Tech on the resume, the Tar Heels actually aren’t dead yet, as they haven’t yet lost to a team that they’ll have a tiebreaker against. However, their margin for error is zilch, and they’re out of home games to work with. In order to make the ACC title game and prevent this season from being a giant disappointment to the fans in Chapel Hill, the Heels will need to win their final three games and have a lot go their way, including having Pittsburgh lose again and someone else takes care of Virginia.

But they’re still in the race, and that means they’re still dangerous. Pittsburgh is in control of its fate for the time being, as the Panthers would win the Coastal Division and play in the ACC championship game if they can win all three of their remaining games. Lose once, however, and the Panthers would open the door for Miami, which faces three winnable games to close the season and owns the tiebreaker against the Panthers. The Hurricanes sit a game back of the Panthers, so Pitt really has no margin for error. One mistake would mean the Hurricanes would be able to control their fate and leave Pittsburgh scoreboard watching, making this a critical game for both the Panthers and the Heels.

How the Public is Betting the North Carolina/Pittsburgh Game

The public seems to be taking North Carolina’s side, but only just and not in enough numbers to push the spread in that direction. The money has come in on Pittsburgh (sharp) despite the Panthers getting just 46 percent of tickets, as the spread has ticked up from -6 to -6.5 and could go over the critical number of 7 by kickoff. The total has dropped a bit, falling from 75 to 73.5

Whether it’s been Sam Howell’s passing or Ty Chandler’s work on the ground, the Tar Heels have proven close to unstoppable on offense when they’re clicking. North Carolina has averaged just short of 500 yards per game, and they haven’t scored fewer than 38 points in a win this season.
But the key words are “in a win”, because when the Heels aren’t on, they can be easily beaten. Virginia Tech and Georgia Tech were able to slow down Carolina’s offense, and when the Heels’ offense got stopped, their defense didn’t have the ability to respond and keep the opposition from taking over. This is an offense that relies on putting up big numbers, and when it doesn’t happen, success is likely not going to be part of the equation.

Numbers aren’t a question with the Panthers, who have put up some ridiculous statistics this season behind the arm of Kenny Pickett. When Pickett makes mistakes, it’s a rarity, as he’s thrown 29 touchdowns against a mere three interceptions on the season. However, unlike Carolina, Pittsburgh doesn’t really have a solid ground game to back Pickett up.

Instead, Pickett has had to do most of the work himself with his receivers, getting only occasional help from Israel Abanikanda. That might work out against Carolina, as the Heels have shown no ability to stop anyone this season. Carolina is giving up 33.4 points per game, and a lot of that is because the Heels are surrendering 420.9 yards per game for the season, with Wake Forest lighting up the scoreboard for 55 points against the Heels in a game that Carolina won. This game is one that’s likely to feature a lot of yardage for both sides, and that tends to be right in Pittsburgh’s wheelhouse.

The teams missed last year’s meeting, but otherwise, this has been a series where plenty of points have been scored. However, Heinz Field is notorious for being one of the least friendly environments for offenses in the NFL, and the same exists in college football as well, as the teams have never topped 65 points in Pittsburgh.

Prior to 2019, this had been just a game that never went Pittsburgh’s way, as Carolina won the first six meetings in the ACC between the teams. But the Panthers finally broke through in 2019 with a 34-27 win, and it’s not like they’d been getting blown out before that game. Every game the teams have played as ACC rivals has been decided by seven points or less.

It could be an ugly night in western Pennsylvania, as up to half an inch of rain is in the forecast for this contest, and winds are set to blow at nine miles per hour. Temperatures will sit in the mid-40s, which could tamp down the offense.

The spread seems a bit too much in this one. Pitt isn’t likely to blow teams out, and these teams have been pretty even throughout their history against each other. I think the Panthers will get the win, but I like Carolina to stay in the game from start to finish. I’ll take the over, and I’ll take the Heels with the points. Don’t forget to check out the rest of our Week 11 college football predictions!